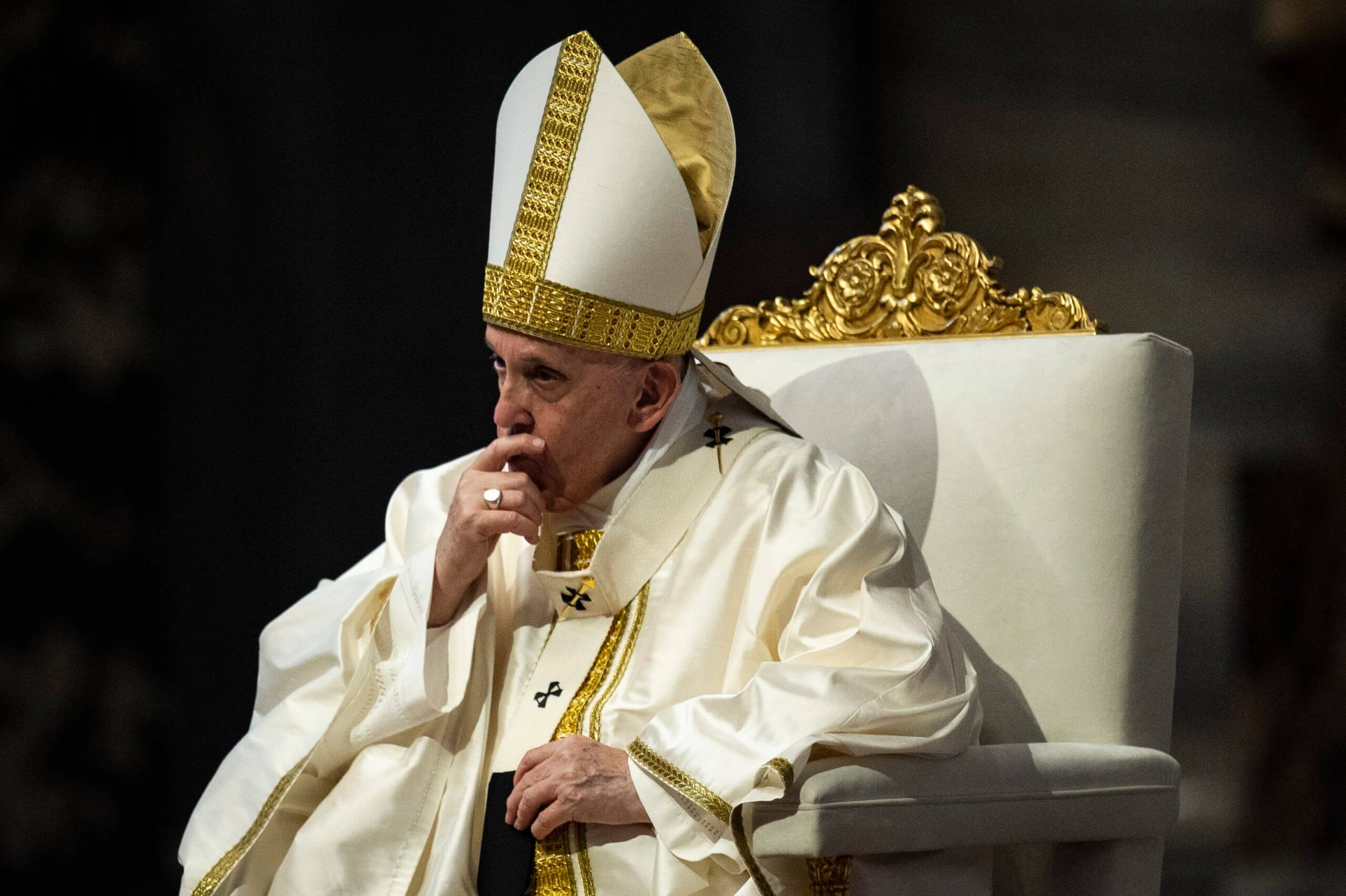 Photo Credit: CNS/Cristian Gennari, pool - Pope Francis listens during the opening Mass of the plenary assembly of the Council of European Bishops' Conferences at the Altar of the Chair in St. Peter's Basilica at the Vatican Sept. 23.

Pope Francis is inviting Catholics both in the mainstream of church life and on the margins to voice their dreams, ideas and concerns in preparation for the Synod of Bishops in 2023.

The process launches Oct. 17 in parishes and Dioceses worldwide. The pope is scheduled to formally open the synod process at the Vatican Oct. 9-10.

Under the theme “For a Synodal Church: Communion, Participation, and Mission,” the pope is calling the church to practice synodality, that is listening to — and hearing — one another in all facets of Church life, two of the coordinators of the effort at the U.S. Conference of Catholic Bishops told Catholic News Service.

The October opening “is just the first step in a larger, longer-term process of really incorporating the fruits of Vatican II and becoming a synodal Church,” said Julia McStravog, a former USCCB employee who is a consultant to the bishops on the process.

“We’re going to have consultation. It’s also going to be a learning process about how to actually engage in a synodal way,” McStravog explained.

The launch begins a two-year process that culminates in the Synod of Bishops in October 2023. The synod is expected to adopt a final document that will guide the continuing development of a synodal Church going into the future.

The pope’s call to synodality is rooted in his deep involvement as a cardinal in 2007 in drafting a document for CELAM, the acronym for the Spanish name of the Latin American bishops’ council, which met in Aparecida, Brazil. The document issued repeated calls for a “continental mission,” a Church that goes out in search of ways to proclaim the Gospel to all.

Starting in October, Dioceses and parishes will be engaged in nearly six months of discussions, or consultations, in which people from across the Church will be invited to participate, said Richard Coll, executive director of the bishops’ Department of Justice, Peace and Human Development, who is coordinating the effort for the USCCB.

Each Diocese is being asked to submit a summary of local discussions by April 1 to the USCCB, which will then take a month to synthesize in a final written presentation for the Vatican.

Coll said each Diocese is being encouraged to let the Holy Spirit guide discussions.

“The Synod of Bishops is saying don’t focus on what the ultimate product is going to be. Focus on the process itself and how the Spirit will guide the Church, represented in part through subsidiarity in the work that you are doing at the diocesan level,” Coll said.

The diocesan consultations also are an invitation to creativity, McStravog said.

“This is a moment to be co-creators with the Spirit. … It is a chance for reinvigorating an engaged community through creativity and the call to be open. There’s a chance to reaffirm the good and reimagine some things that could be better,” she explained.

To facilitate the effort, the Synod of Bishops, under Cardinal Mario Grech, secretary-general, introduced documents Sept. 7 to guide the process in Dioceses. The USCCB followed up by quickly developing a supplemental document as well.

The primary document is a “vademecum,” or handbook, offering support for diocesan teams “to prepare and gather the people of God so that they can give voice to their experience in their local church.”

It also explains the objectives of the synodal process, principles of the process, the timeline for the two-year process, and resources for organizing the process.

A complementary preparatory document offers background to the development of the process, which is rooted in Pope Francis’ often-made invitation for “journeying together” in the world.

It states, “This journey, which follows in the wake of the Church’s ‘renewal’ proposed by the Second Vatican Council, is both a gift and a task: By journeying together and reflecting together on the journey that has been made, the church will be able to learn through her experience which processes can help her to live communion, to achieve participation, to open herself to mission.”

The USCCB document further defines the Vatican’s documents. It a checklist of actions, proposed timeline for Dioceses to follow, and a listing of background materials to help walk parishes and dioceses through the initial process and ensure wide participation.

It stresses that during the churchwide synod that begins in October, and leads to the 2023 world Synod of Bishops, “the people of God are called to ‘journey together.'”

An addendum, developed by the U.S. bishops’ Committee on Divine Worship, offers ideas for liturgical celebrations to mark the opening and closing of the synodal process in dioceses and suggestions for Scripture readings and musical themes.

Coll said the USCCB has been communicating with Dioceses since May about forming teams to coordinate participation in the listening sessions. The Vatican documents were forwarded to Dioceses soon after they were received by the USCCB.

At its meeting Sept. 14-15, the USCCB Administrative Committee, which includes the USCCB’s officers and the chairmen of the bishops’ various committees, reviewed the materials. It agreed to allot time for discussion on the synodal process during its fall general assembly in November, Coll said.

As Dioceses prepare for the listening sessions, McStravog said the discussions present an opportunity for “gentleness and grace” to take hold within the Church.

Coll and McStravog also echoed the pope’s Sept. 18 call to members of his Diocese, the Diocese of Rome, to go to the margins to ensure that “the poor, the homeless, young people addicted to drugs, everyone that society rejects are part of the synod.”

“One of the questions is listening. How do we actually listen? It goes back to the invitation. The onus is on the diocese to really think through who is often excluded from our table. The Church needs to go out and invite people back in,” McStravog said.

The vademecum also recognizes the effects of the Covid-19 pandemic on the Church.

The document explains that the pandemic “has made existing inequalities explode” and shows that the entire human family is affected, requiring a unified response.

Secondly, the document continues, the pandemic poses logistical challenges for participation in diocesan listening sessions. It calls on dioceses to look for ways such as online gatherings, small group meetings or other safe means to gain insight from church members.

Once the Vatican receives the synthesized reports of diocesan meetings from bishops’ conferences around the world, the Secretariat of the Synod of Bishops will draft by September 2022 the “instrumentum laboris,” or working document, to guide continental or regional ecclesial assemblies that will take place by March 2023.

Those assemblies will produce another set of documents that will help in the drafting of a second working document for the Synod of Bishops in October 2023. The synod is expected to produce a final document on synodality throughout the Church.