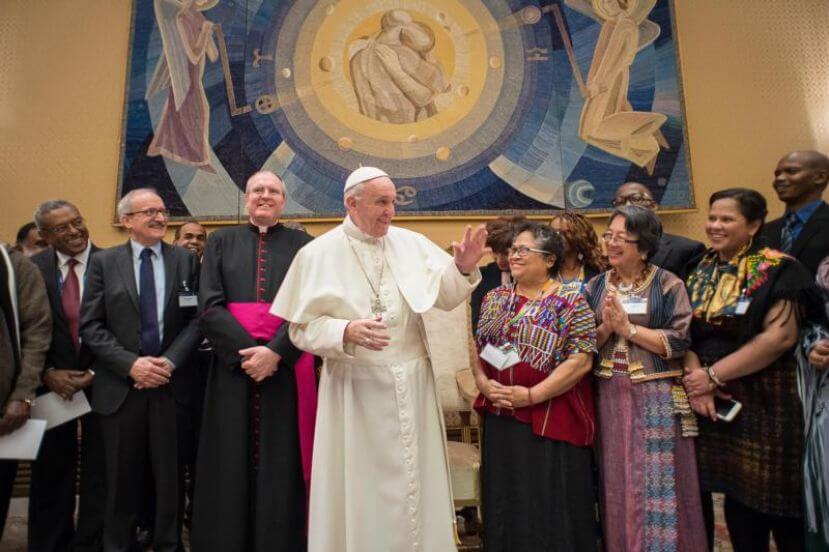 Respect Earth and Others, Says Pope

Development projects involving indigenous communities must be planned in consultation with them and must respect their traditional relationship to the land, Pope Francis said.

Having the “prior and informed consent” of the native communities who could be impacted by development projects is essential for “peaceful cooperation between governing authorities and indigenous peoples, overcoming confrontation and conflict,” the pope said Feb. 15 during a meeting with about three dozen representative of indigenous communities.

The representatives from Africa, Asia and the Pacific, Latin America and the Caribbean were in Rome for continuing discussions with the U.N.-related International Fund for Agricultural Development. Their talks aim at ensuring development projects impacting native communities are carried out in consultation with them and that they respect their land, cultures and traditions.

“I believe that the central issue is how to reconcile the right to development, both social and cultural, with the protection of the particular characteristics of indigenous peoples and their territories,” the pope said. “This is especially clear when planning economic activities which may interfere with indigenous cultures and their ancestral relationship to the earth.”

While none of the representatives were from North America, several news outlets immediately connected the pope’s remarks to the ongoing protests over the construction of a leg of the Dakota Access Pipeline, which would go through indigenous land in North Dakota. Several Sioux tribes have protested the pipeline project saying it endangers the Standing Rock reservation’s water supply and infringes on sacred tribal grounds.

Departing from his prepared text, Pope Francis praised the indigenous communities for approaching progress “with a special care for Mother Earth. In this moment in which humanity is committing a grave sin in not caring for the earth, I urge you to continue to bear witness to this. And do not allow new technologies — which are legitimate and good — but do not allow those that destroy the earth, that destroy the environment and ecological balance, and which end up destroying the wisdom of peoples.”