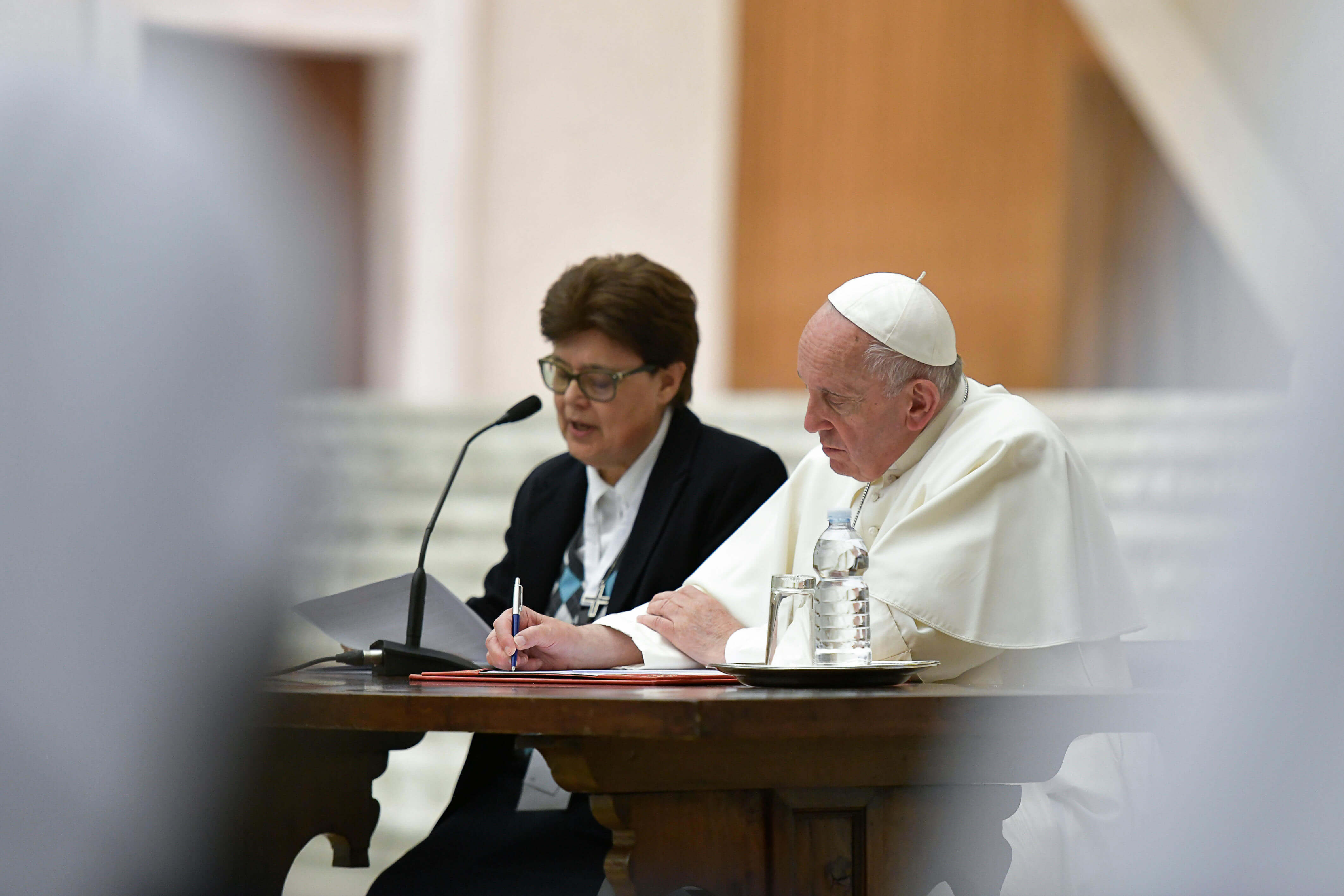 Photo Credit: CNS/Vatican Media via Reuters - Sister Carmen Sammut, superior general of the Missionary Sisters of Our Lady of Africa and the outgoing president of the International Union of Superiors General, gives her address alongside Pope Francis during a meeting of the organization at the Vatican May 10 at the Vatican. Sister Sammut and other members were in Rome for the plenary assembly of the International Union of Superiors General, which represents more than 450,000 women religious in more than 100 countries.

Pope discusses deaconesses, need for nuns to be servants not ‘maids’

Pope Francis told the heads of women’s religious orders from throughout the world they need to send sisters on assignments that truly serve the Church and those in need and not agree to requests for “maids.”

“You did not become a religious in order to become the maid of a priest,” he said to some 850 superiors general in Rome for their plenary assembly.

There are many needed forms of service, whether they be in administration or caring for and performing domestic tasks for those in need, he said May 10 in the Vatican’s Paul VI audience hall.

But being “a maid, no,” he said; “You must help here in this” because even if the Church is trying to stop exploitation among its ranks, it is still the superior general who decides “yes” or “no” to these requests.

The pope’s comments came during his meeting with those taking part in the May 6-10 plenary of the International Union of Superiors General, which represents more than 450,000 sisters in more than 100 countries. The gathering offered talks, workshops, reflections and discussion on a number of topics, including interreligious dialogue, cross-cultural experiences, caring for children and the planet, and the future of religious life.

The pope, who spoke off-the-cuff and answered people’s questions, was seated behind a wooden table in the front of the hall next to Sister Carmen Sammut, superior general of the Missionary Sisters of Our Lady of Africa and the outgoing president of the UISG. Before reading her remarks, she joked that she never imagined she would ever be “sitting at the right hand of the father.”

She thanked the pope for being a source of inspiration and helping the Church fight the abuse of minors and vulnerable people.

“We are also grateful for your having faced the painful issue of abused religious,” she said, noting that many forms of abuse occur worldwide, including cases of religious abusing their fellow sisters.

National conferences of religious orders “are facing this scourge with courage and determination,” she said, listing a number of UISG initiatives to help congregations in raising awareness, training superiors and establishing protocols and codes of conduct.

The pope said he was very much aware of the abuse of religious, calling it “a serious and grave problem.”

Some religious face not just sexual abuse, he said, but also the abuse of power and conscience.

“We have to fight against this,” which must include the superiors general making sure they send their members where they will be in service, not servitude, the pope said.

Fighting abuse, he continued, has been a slow process, especially seeing how it is only now that people are understanding the problem with “lots of shame.”

Sister Sammut thanked the pope for having accepted UISG’s request during its last plenary assembly in 2016 to establish an official commission to study the New Testament deaconesses and whether women could be admitted to the diaconate. The pope told reporters May 7 the commission did not reach a unanimous conclusion about whether deaconesses in the early Church were “ordained” or formally “blessed.”

The pontiff told the women religious that the commission, made up of men and women experts, could only agree up to a certain point, and that he was officially handing the report’s unanimous findings on to Sister Sammut.

The pope said separate reports each commission member produced outlining their own different opinions and insights needed further study “because I cannot make a sacramental decree without a theological, historical foundation.”

He further elaborated on the complex and difficult task of making sure developments and changes in the Church remain faithful to God’s will and revelation when he took questions from the audience.

“We cannot change revelation. It is true that revelation develops” because it is in “constant movement in order to make itself more clear,” he said.

That is not what the Church taught 50 years ago, but does the new revision mean the Church changed, he asked. “No. Moral awareness developed” and grew while the truth remains the same, he said.

That means whatever is proposed today — whether in regard to moral teaching or women deacons — it always has to be in harmony with revelation, he said.

“Regarding the diaconate, we have to see what was at the beginning of revelation. And if there was something, let it grow; if there was nothing, if the Lord did not want a sacramental ministry for women, it’s not OK. That’s why we turn to history,” he said.

Dialogue and discernment are important parts of this process, he explained, because “we know what the truth is,” but people need to discuss and decide how they are going to constantly grow in the truth in today’s world.