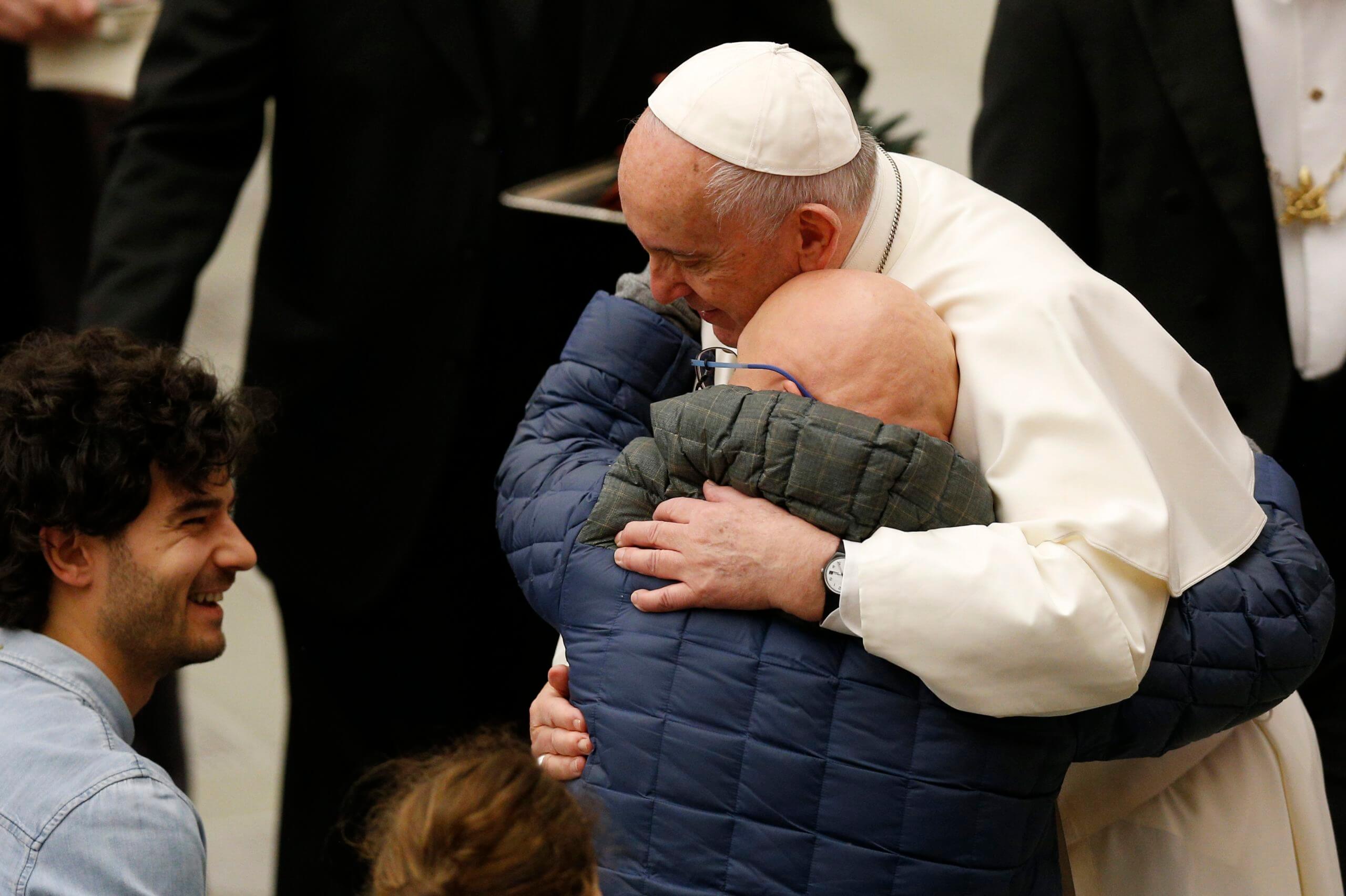 Photo Credit: CNS/Paul Haring - Pope Francis embraces a man as he meets the disabled during his general audience in Paul VI hall at the Vatican Jan. 8, 2020.

Pope: Discrimination against people with disabilities must end

The Catholic Church must be a home for all, especially for people with disabilities who continue to face discrimination in the world and in the Church, Pope Francis said.

In a message for the Dec. 3 celebration of the U.N.’s International Day of Persons with Disabilities, the pope said that although church teaching is clear, too many men, women and children with disabilities lack spiritual care, which is “the worst form of discrimination.”

“Discrimination continues to be all too present at various levels of society; it feeds on prejudice, ignorance and a culture that finds it hard to appreciate the inestimable value of each person,” he wrote in the message, which was published Nov. 25.

Nevertheless, he said, baptism makes all men and women “full-fledged” members of the church “so that all of us, without exclusion or discrimination, can say: ‘I am the church!'” he wrote.

“The church is truly your home,” the pope told people with disabilities. “We, all of us together, are the church, because Jesus chose to be our friend.”

The U.N. theme for the 2021 celebration of the international day is “Leadership and participation of persons with disabilities toward an inclusive, accessible and sustainable post-COVID-19 world.”

To mark the occasion, the Vatican Dicastery for Laity, the Family and Life announced Nov. 29 the launch of a video campaign titled #IamChurch.

According to the dicastery, the campaign, which will begin Dec. 6, will feature the testimonies of five Christians with disabilities from around the world.

“We are convinced that if we are able to listen attentively to the voices of our sisters and brothers with disabilities, the ecclesial community will come out truly enriched,” said Gabriella Gambino, undersecretary of the dicastery.

In his message, the pope said he wanted to tell people with disabilities that “the church loves you and needs each of you for the fulfilment of her mission at the service of the Gospel.”

“For this reason, each of you is also called to make his or her own contribution to the synodal journey. I am convinced that, if it truly becomes a participative and inclusive ecclesial process, the church community will be genuinely enriched,” he wrote.

However, the pope said that, still today, many people with disabilities “are treated as foreign bodies in society” and that such discrimination “feeds on prejudice, ignorance and a culture that finds it hard to appreciate the inestimable value of each person.”

The “continuing tendency to regard disabilities — which are the result of the interaction between social barriers and each person’s limitations — as if they were a kind of disease, contributes to keeping your lives separate and stigmatizing you,” he said.

“When we experience such discrimination, it is precisely our friendship with Jesus, that all of us have received as an undeserved gift, which redeems us and enables us to perceive differences as a treasure. For Jesus does not call us servants, women and men of lesser dignity, but friends: confidants worthy of knowing all that he has received from the Father,” the pope wrote.

Pope Francis also acknowledged the difficulty people with disabilities experienced during the pandemic, including being forced to stay home or in residential facilities for long periods and the interruption of social services, and said he was close to them “with love and affection.”

“The church stands beside those of you who are still struggling with the coronavirus. As always, she insists that everyone be provided with treatment, and that disabilities not prevent access to the best care available,” he said.

Share This Post
Pope Francis, Vatican, Disabled
See More
Last Article
‘As we grow, so must our faith’
Next Article
‘Share your faith journey’
Back to Vermont Catholic Magazine