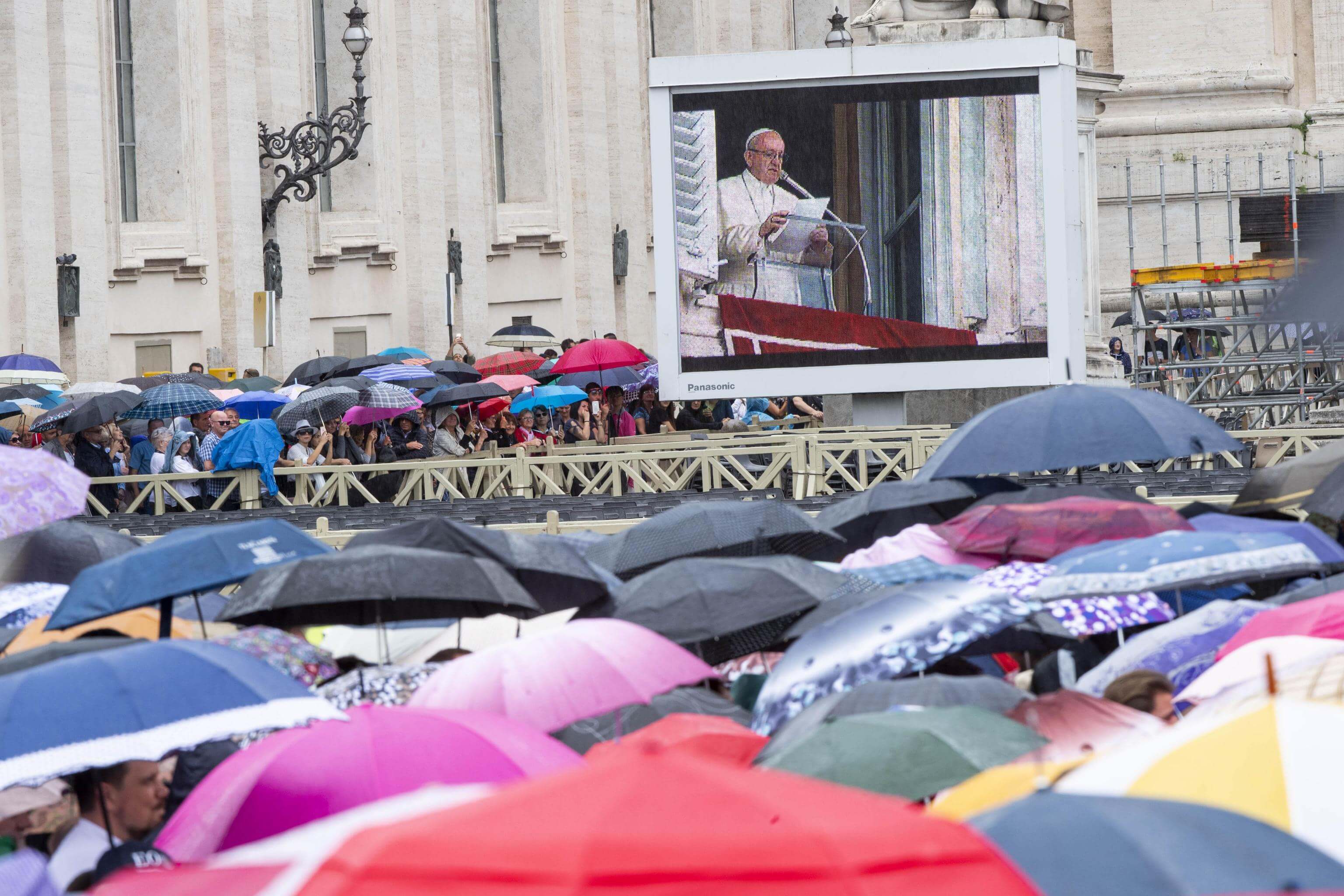 Photo Credit: CNS photo/Claudio Peri - Pilgrims watch Pope Francis on a large screen in the rain as he leads the Angelus Oct. 7 from the window of his studio overlooking St. Peter's Square at the Vatican.

God wants couples to live out their marriage faithfully and not abandon hope when things go awry, Pope Francis said.

“A love with mutual self-giving sustained by Christ’s grace” is what allows couples to remain united in marriage, the pope said Oct. 7 during his Sunday Angelus address.

But “if individual interests — one’s own satisfaction — prevail in spouses, then their union will not endure,” he said.

The pope reflected on the Sunday Gospel reading from St. Mark, in which the Pharisees test Jesus by asking him if it is “lawful for a husband to divorce his wife.”

“What God has joined together, no human being must separate,” Jesus replied to them.

Jesus’ teaching, the pope explained, is “very clear and defends the dignity of marriage” as a union between man and woman “that implies fidelity.”

Nevertheless, the Gospel story also realistically recognizes that couples called to “live the experience of relationship and love can painfully do things that put it in crisis,” he said.

While Jesus doesn’t set out to label “everything that leads to the failure of a relationship,” the pope said, he takes the opportunity to confirm God’s plan “where the strength and beauty of the human relationship stand out.”

“On the one hand, the Church does not tire of confirming the beauty of the family as given to us by Scripture and tradition,” he said. “But at the same time, she makes an effort to make her maternal closeness felt by those who live the experience of relationships that are broken or carried out in a painful and tiring way.”

Pope Francis said that when faced with couples in troubled marriages, the Church is called to be present with love, charity and mercy to “lead wounded and lost hearts back to God.”

“God’s way of acting with his unfaithful people — that is, with us — teaches us that wounded love can be healed by God through mercy and forgiveness,” the pope said.