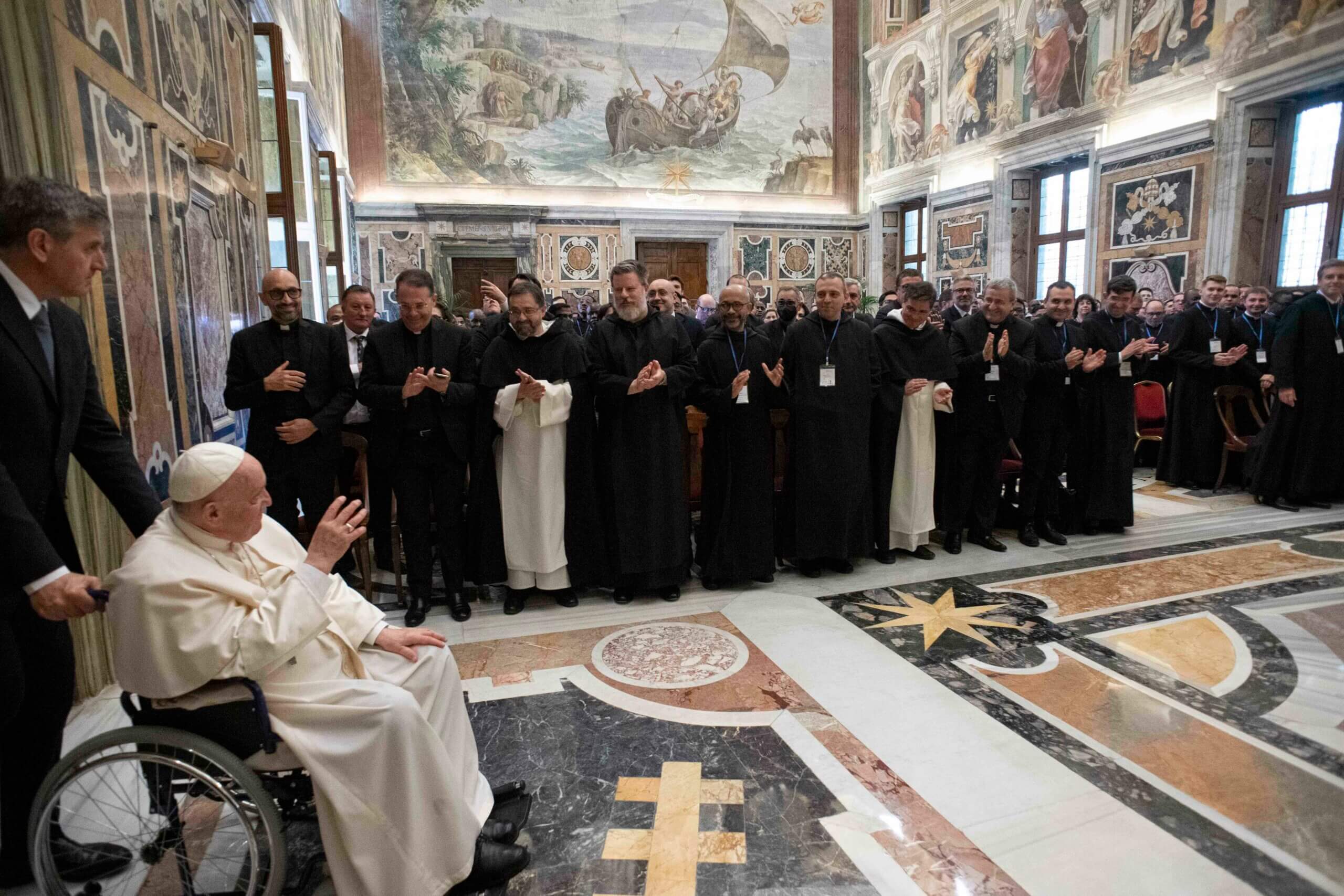 Photo Credit: CNS/Vatican Media - Pope Francis arrives for an audience with students and professors of Rome's Pontifical Institute of Liturgy at St. Anselm, at the Vatican May 7. The pope said that the celebration of the liturgy and the study of it should lead to greater unity in the Church, not division and squabbles.

The study and celebration of the liturgy should lead to a sense of awe before God, a commitment to mission and a growing unity within the church, not tensions and squabbles, Pope Francis said.

“When liturgical life is a bit of a banner of division, there is the odor of the devil, the deceiver. It is not possible to worship God and at the same time make the liturgy a battlefield,” the pope said May 7 during a meeting with students and professors from the Pontifical Institute of Liturgy at St. Anselm in Rome.

The papal audience marked the conclusion of a celebration of the 60th anniversary of the Benedictine-run institute, which was founded after the Second Vatican Council and its reform of the liturgy.

Pope Francis said the institute responded to “the growing need of the people of God to live and participate more intensely in the liturgical life of the church” by understanding it and experiencing “its mystery with an ever-new sense of wonder.”

“One does not possess the liturgy,” he said. Rather, the liturgy is lived and celebrated.

However, the pope said, people must be aware of “the temptation of liturgical formalism: to focus on forms, formalities rather than reality, as we see today in those movements that try to go backwards and deny the Second Vatican Council. Then the celebration is recitation, it is something without life, without joy.”

The teaching of every church council has taken time to be accepted fully, he said, and it is no different with Vatican II, especially with its reform of the liturgy.

He told the students and professors that he remembers as a youngster how people were so upset — “they rent their garments” — by reforms that began even before the council, such as Pope XII ruling that drinking water did not violate the required fast before Mass or allowing people to fulfill their Sunday Mass obligation by attending a Saturday evening Mass or the restoration of the Easter vigil on Saturday night.

“All of these things scandalized closed-minded people,” he said, and “it still happens today. Indeed, those with closed mindsets use liturgical patterns to defend their own point of view. Using the liturgy: this is the drama we are experiencing in ecclesial groups that are distancing themselves from the church, questioning the council (and) the authority of the bishops” even as they claim “to preserve tradition.”

Celebrating the liturgy must increase communion within the church and unity with others, he said, because “the liturgical life opens us to each other, to those closest and furthest from the church, in our common belonging to Christ.”

“Giving glory to God in the liturgy finds its counterpart in love of neighbor, in the commitment to live as brothers and sisters in daily life, in the community in which I find myself, with its merits and its limitations,” Pope Francis said.

And, he said, every Mass or liturgy ends with sending members of the congregation out on mission.

“What we live and celebrate leads us to go out to meet others, to meet the world around us, to meet the joys and needs of so many people who perhaps live without knowing the gift of God,” he said. “A genuine liturgical life, especially the Eucharist, always impels us to charity, which is above all openness and attention to others.”

Share This Post
Pope Francis, Liturgy, Masss
See More
Last Article
Foundress of the Sisters of the Presentation of Mary to be canonized
Next Article
Why do we call the Mass, ‘the Mass’?
Back to Vermont Catholic Magazine