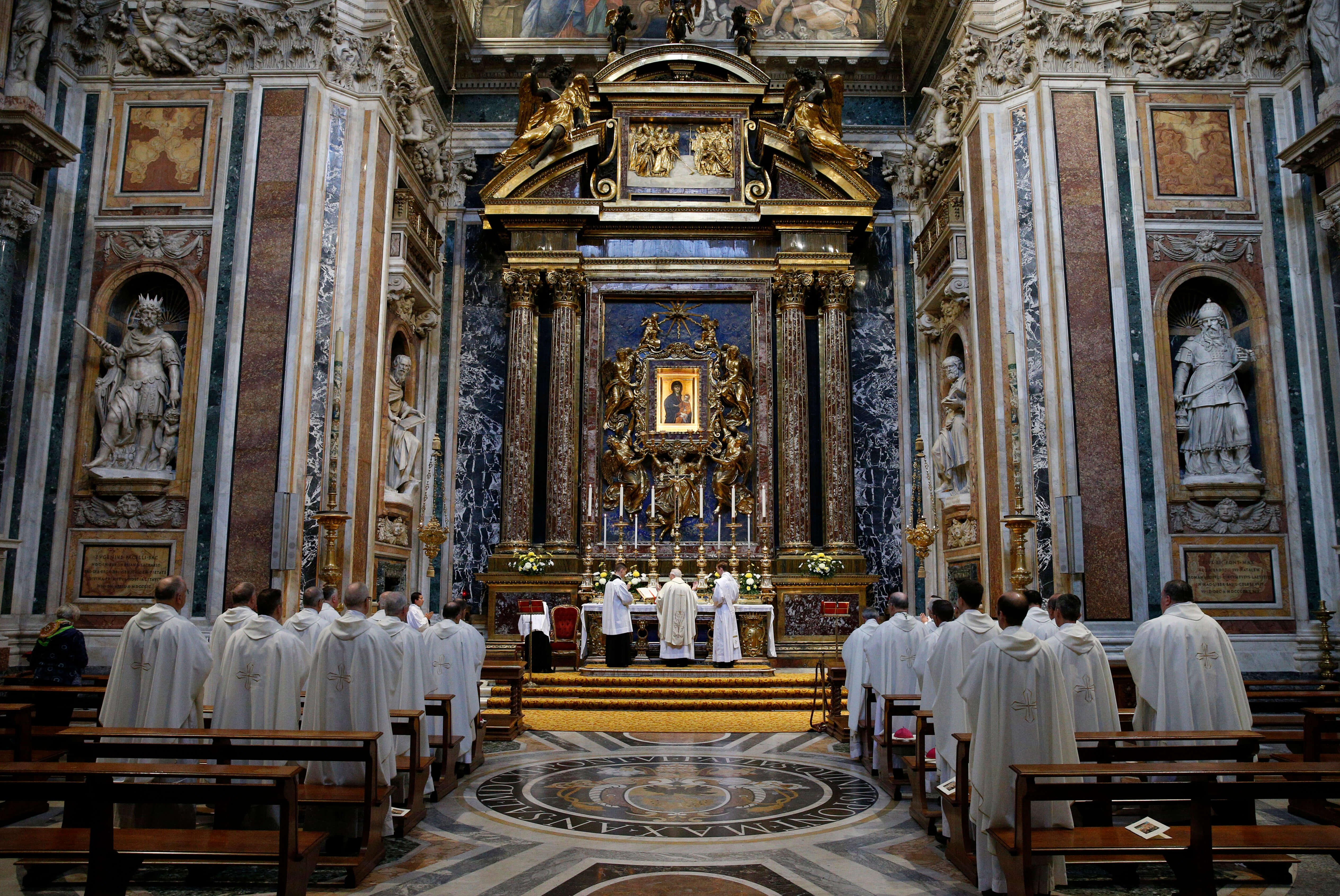 Photo Credit: CNS/Paul Haring - U.S. bishops from the New England States concelebrate Mass at the Basilica of St. Mary Major in Rome Nov. 4. The bishops were making their "ad limina" visits to the Vatican to report on the status of their Dioceses to Pope Francis and Vatican officials.

In time of crisis, Church must be renewed, U.S. archbishop says

At times of great crisis in the Catholic Church, God intervened to renew it through the example and witness of saints, said Archbishop Leonard P. Blair of Hartford, Connecticut.

“We feel very keenly today, all of us, the weight of human sinfulness, of infidelity, of scandal, of the sin that weighs down the church,” Archbishop Blair said in his homily Nov. 4 during a Mass at the Rome Basilica of St. Mary Major.

Nevertheless, he said, the life and example of St. Charles Borromeo, who was among the saints who spearheaded the Counter-Reformation, is “a model of faith” that bishops can look to be inspired to find “courage, hope and joy.”

Archbishop Blair was the principal celebrant and homilist of the first Mass that the bishops of Massachusetts, Rhode Island, Connecticut, New Hampshire, Maine and Vermont celebrated during their visits “ad limina apostolorum” — to the threshold of the apostles.

While the visits are filled with meetings with various offices of the Roman Curia, the “Directory for the ‘Ad Limina’ Visit” makes clear that the ad liminas are a pilgrimage first of all.

The purpose of the bishop’s pilgrimage, the directory states, is “the strengthening of their own responsibility as successors of the Apostles and of their hierarchical communion with the Successor of Peter. The point of reference is a visit to the tombs of Sts. Peter and Paul, pastors and pillars of the Roman church.”

On the first day of their pilgrimage, the New England bishops celebrated Mass in the chapel of the Rome basilica that houses the Marian icon “Salus Populi Romani” (health of the Roman people).

In his homily, Archbishop Blair reflected on the day’s memorial of St. Charles Borromeo and read a description of the saint by Bishop Antonio Seneca of Anagni, Italy, who had lived in the same house with him.

St. Charles, the archbishop read, was “vigilant in rooting out vice, benevolent in correction, just in judgment, loving in punishment, patient of human weakness, quick to avenge disobedience, his justice was united with kindness, his severity with gentleness and peace. He was a diligent guardian of wholesome discipline both in priests and people.”

Archbishop Blair said that the Italian bishop’s description of the saint “took place in a church that had seemed to be failing, really failing.”

Recalling his years working at the Vatican Secretariat of State — from 1994 to 1997 — Archbishop Blair noted that the English section is located in an area known as the Borgia tower, where among the rooms is the apartment of Giovanni Borgia, the murdered son of Pope Alexander VI.

When the sins of those called to lead the Church became more widely known, Archbishop Blair said, “it was a time of utter pain for the Church and one might wonder how the Church would ever get itself out of such a mess.”

Yet, decades after the death of the pope’s son, St. Charles Borromeo “inhabited that very same room,” he said. “The plea of God’s people — that the Church be constantly renewed, and (that) by conforming itself to the likeness of Christ may show his face to the world — that prayer was answered.”

In the day’s reading from St. Paul’s Letter to the Romans, the archbishop noted, the apostle tells the Christian community that “the gifts and the call of God are irrevocable.”

“By (St. Charles’) very existence, in the midst of all that was going on in those days, truly the words of St. Paul were fulfilled with God’s irrevocable call,” Archbishop Blair said.

“I will close with one saying ascribed to St. Charles Borromeo that is perhaps the most important for us,” he said: “Souls are won on one’s knees. And we need to be men of faith and of prayer.”