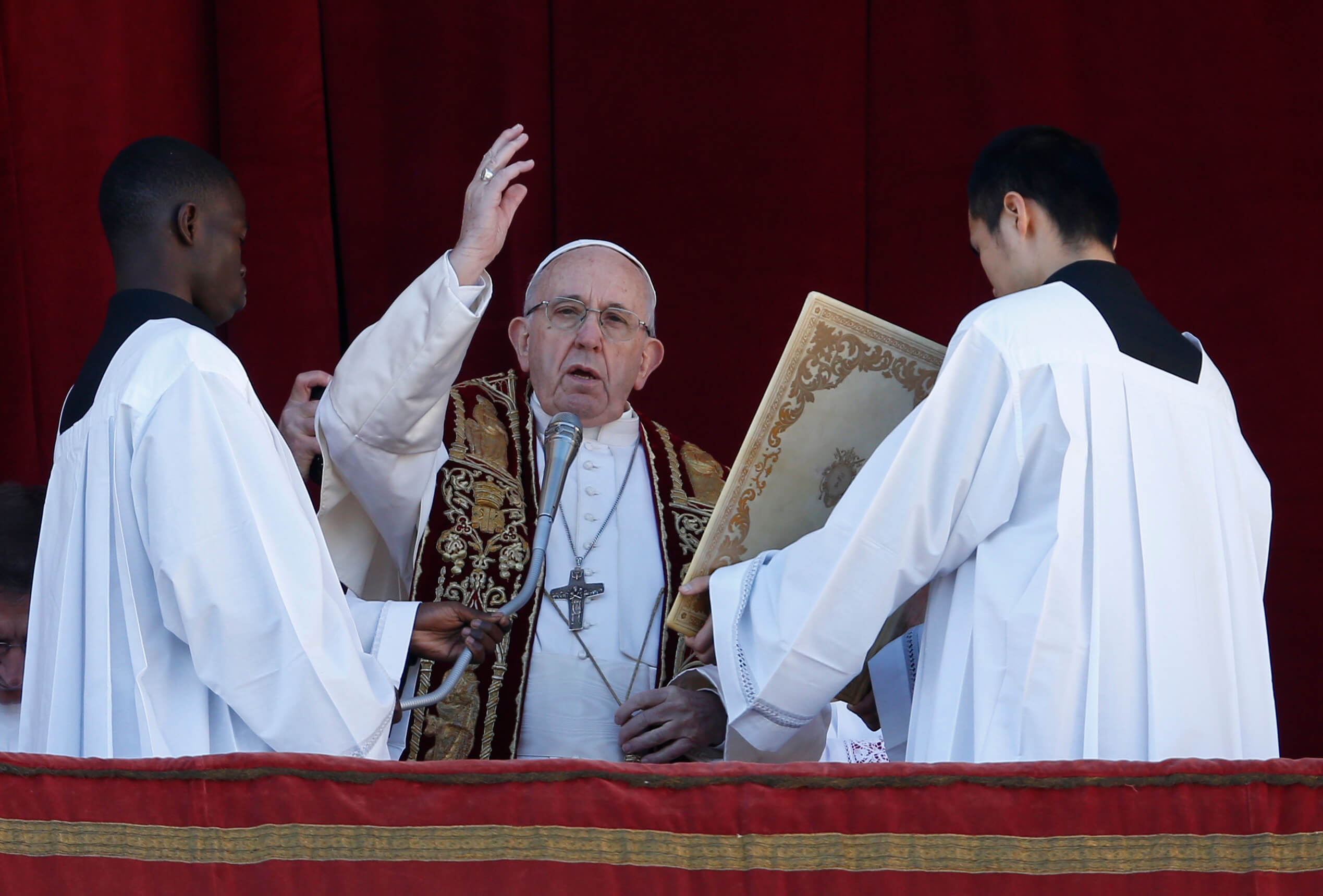 Photo Credit: CNS/Paul Haring - Pope Francis delivers his Christmas blessing "urbi et orbi" (to the city and the world) from the central balcony of St. Peter's Basilica at the Vatican Dec. 25.

Delivering his formal Christmas message and blessing, Pope Francis prayed for a world where all people would recognize that they are brothers and sisters and would work for justice and for peace.

The birth of Jesus proclaims that “God is a good father and we are all brothers and sisters. This truth is the basis of the Christian vision of humanity,” the pope said Dec. 25 before giving his blessing “urbi et orbi” (to the city and the world) and appealing for peace in Syria, Ukraine, the Holy Land, Yemen, Venezuela, Nicaragua and throughout Africa.

Tens of thousands of people gathered in St. Peter’s Square under clear blue skies for the blessing and millions more watched on television or on computers, tablets and phones; the pope’s blessing went to all of them.

“May the little child whom we contemplate today in the manger, in the cold of the night, watch over all the children of the world, and every frail, vulnerable and discarded person,” Pope Francis said.

“May all of us receive peace and consolation from the birth of the Savior and, in the knowledge that we are loved by the one heavenly Father, realize anew that we are brothers and sisters and come to live as such!” he prayed.

In his message, Pope Francis said that believing in Jesus means believing that all people are brothers and sisters. Without that recognition, he said, “our efforts for a more just world fall short, and even our best plans and projects risk being soulless and empty.”

The pope said his “wish for fraternity,” included “fraternity among individuals of every nation and culture,” among “people with different ideas, yet capable of respecting and listening to one another,” and among people of different religions.

“By his incarnation, the son of God tells us that salvation comes through love, acceptance, respect for this poor humanity of ours, which we all share in a great variety of races, languages, and cultures,” the pope said.

Since all people are created by God, human differences shouldn’t be a threat, but a blessing, he said. After all, “when an artist is about to make a mosaic, it is better to have tiles of many colors available, rather than just a few!”

Being brothers and sisters does not mean humanity will not experience differences and even tensions, he said, but there should be “an unbreakable bond uniting us.”

The pope prayed that a rediscovery of fraternity would “enable Israelis and Palestinians to resume dialogue and undertake a journey of peace that can put an end to a conflict that for over 70 years has rent the land chosen by the Lord to show his face of love.”

He prayed that the people of Syria, where Christians and Muslims once lived in peace, would find that again after more than seven years of war.

Speaking less than a week after U.S. President Donald Trump ordered the withdrawal of U.S. troops from the country, Pope Francis urged the international community to “work decisively for a political solution that can put aside divisions and partisan interests, so that the Syrian people, especially all those who were forced to leave their own lands and seek refuge elsewhere, can return to live in peace in their own country.”

In Ukraine, where a Russia-supported war has been raging in the eastern regions since 2014, the pope prayed that Jesus would “bring relief,” adding that “only with a peace respectful of the rights of every nation can the country recover from the sufferings it has endured and restore dignified living conditions for its citizens.”

And as tensions continue over the status of the Orthodox communities in Ukraine, with Orthodox Ecumenical Patriarch Bartholomew of Constantinople set to recognize the country’s new independent Orthodox church over the objections of the Russian Orthodox Church, Pope Francis said, “I am close to the Christian communities of the region, and I pray that they may develop relationships of fraternity and friendship.”

For Africa he prayed that “the Holy Child, the King of Peace,” would “silence the clash of arms and allow a new dawn of fraternity to rise over the entire continent, blessing the efforts of all those who work to promote paths of reconciliation in political and social life.”

Pope Francis prayed for the continued rapprochement between North and South Korea, for a recovery of “social harmony” in Venezuela and for an overcoming of “divisions and discord” in Nicaragua.

He also prayed for every Christian who celebrates Christmas “in difficult, if not hostile situations,” adding a prayerful hope “May the Lord grant that they, and all minorities, may live in peace and see their rights recognized, especially the right to religious freedom.”