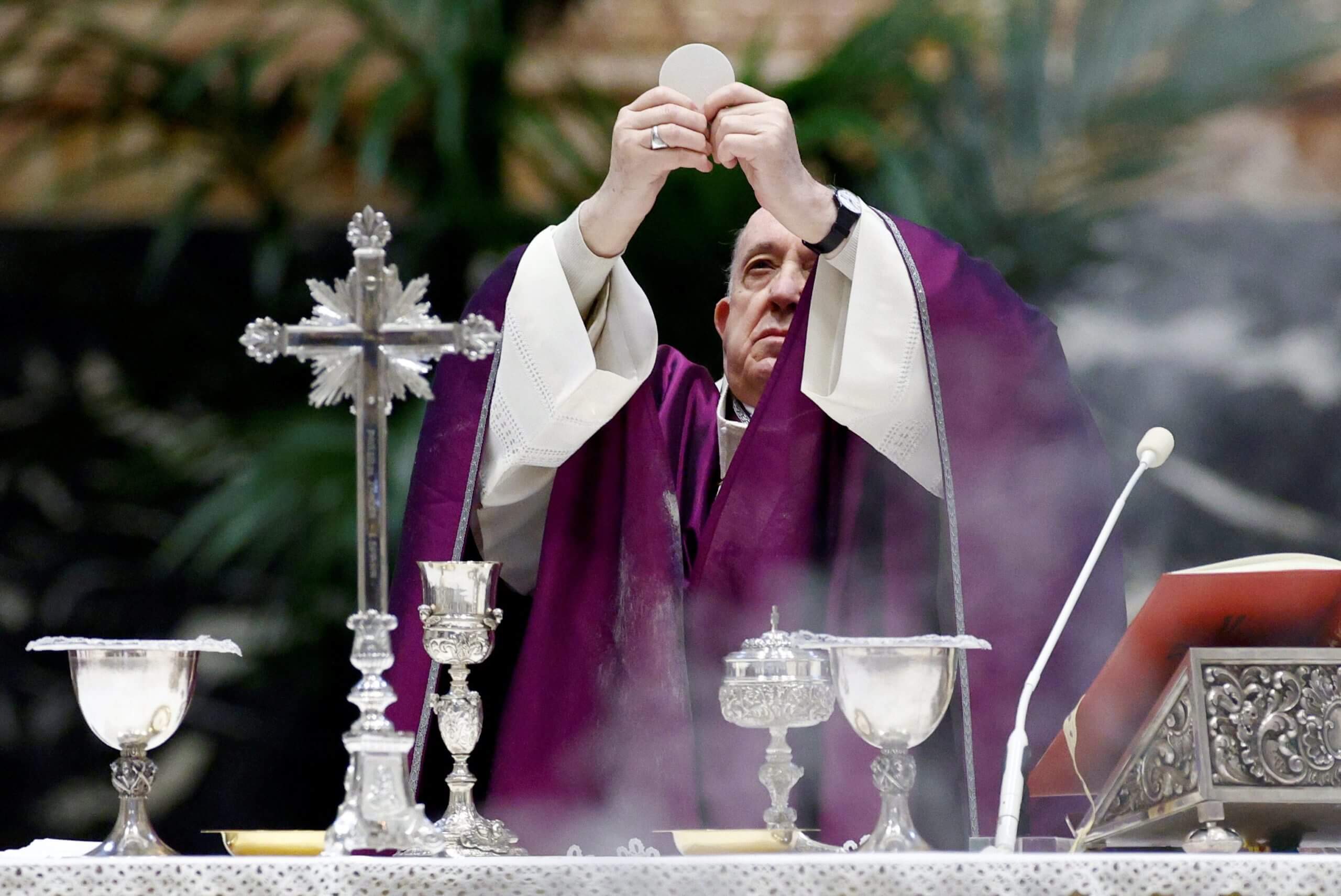 For Lent, ask if one’s life is centered on God or oneself, pope says

Lent is a time to reconsider the path one is taking in life and to finally answer God’s invitation to return to him with one’s whole heart, Pope Francis said. “Lent is not just about the little sacrifices we make, but about discerning where our hearts are directed,” he said, “toward God or toward myself?”

The pope’s remarks came in his homily at Mass Feb. 17 for Ash Wednesday. In his homily, the pope said one must bow to receive ashes sprinkled on the crown of the head, which reflects the “humble descent” one makes in reflecting on one’s life, sins and relationship with God. “Lent is a journey of return to God,” especially when most people live each day ignoring or delaying their response to God’s invitation to pray and do something for others.

“It is a time to reconsider the path we are taking, to find the route that leads us home and to rediscover our profound relationship with God, on whom everything depends,” he said.

“The journey of Lent is an exodus from slavery to freedom,” he said, noting the easy temptations along that journey, including yearning for the past, or hindered by “unhealthy attachments, held back by the seductive snares of our sins, by the false security of money and appearances, by the paralysis of our discontents.

To embark on this journey, we have to unmask these illusions.” The way back to God, he said, starts with understanding, like the prodigal son, how “we have ended up with empty hands and an unhappy heart” after squandering God’s gifts “on paltry things, and then with seeking God’s forgiveness through confession.

The pope again reminded confessors that they must be like the father in the story of the prodigal son and not use “a whip,” but open their arms in a welcoming embrace. “The journey is not based on our own strength. Heartfelt conversion, with the deeds and practices that express it, is possible only if it begins with the primacy of God’s work” and through his grace, the pope said. What makes people just is not the righteousness they show off to others, “but our sincere relationship with the Father,” after finally recognizing one is not self-sufficient, but in great need of him, his mercy and grace.

The pope asked people to contemplate daily the crucified Christ and see in his wounds, “our emptiness, our shortcomings, the wounds of our sin and all the hurt we have experienced.” “We see clearly that God points his finger at no one, but rather opens his arms to embrace us,” he said. It is in life’s most painful wounds, that God awaits with his infinite mercy because it is there “where we are most vulnerable, where we feel the most shame” and where he comes to meet his children again.

“And now,” the pope said, “he invites us to return to him, to rediscover the joy of being loved.” — Carol Glatz, Catholic News Service

Do you want to fast this lent?