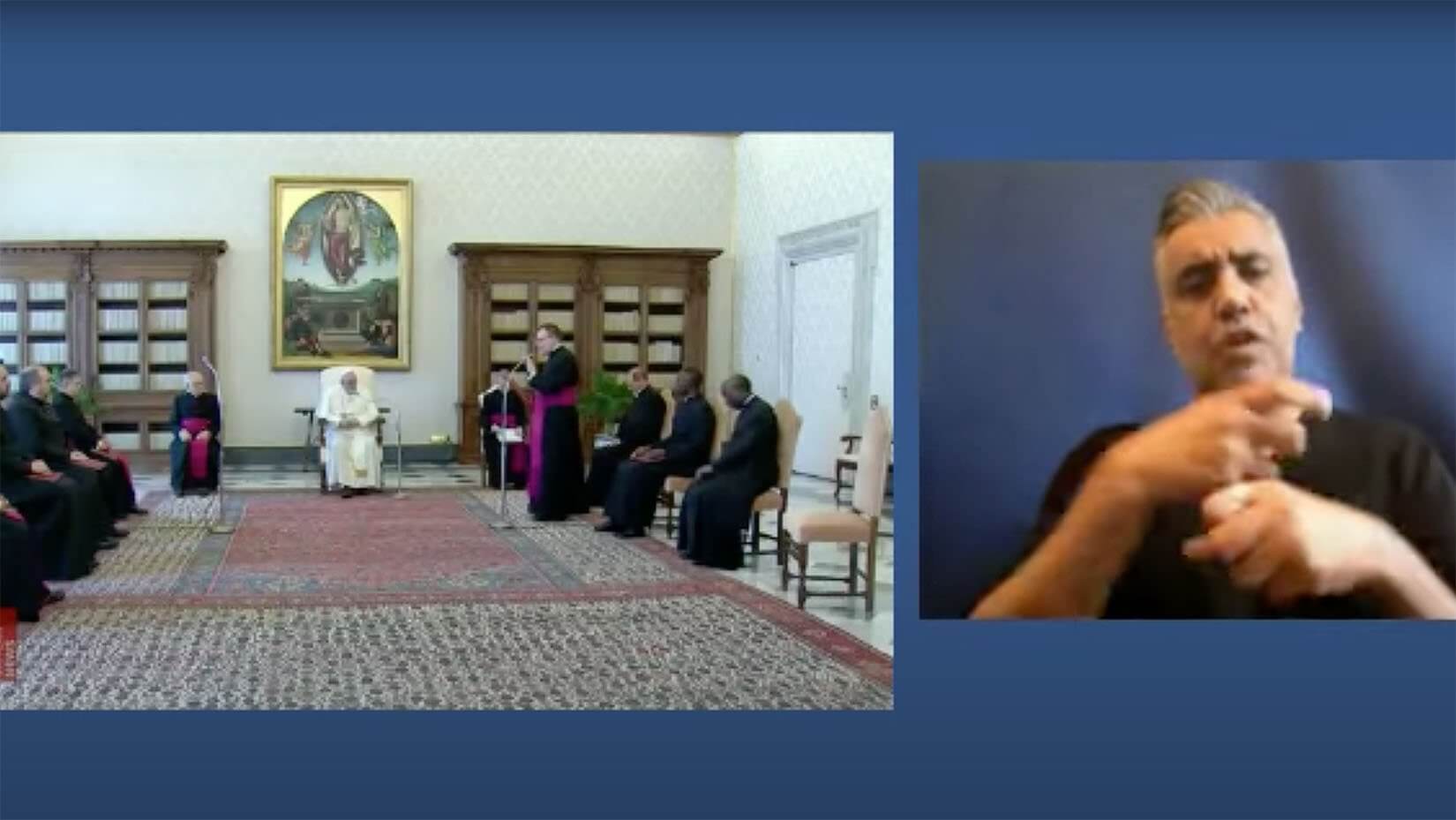 When the Easter livestream of Pope Francis’ general audience and the Angelus was broadcast for the first time in American Sign Language on the Vatican’s YouTube channel, the deaf Catholic ministry group in Texas took particular notice.

Redemptorist Father Len Broniak, chaplain and program director of the Archdiocese of Galveston-Houston’s deaf ministry called it a “great step forward for open access to the pope’s messages. I’m glad awareness is growing.

“The deaf community has been overlooked for such a long time. I hope this heightens awareness of the bishops throughout the world,” the priest added.

The Vatican’s new “No One Excluded” project offers interpreters in Italian and American Sign Language.

Along with the YouTube channel dedicated to accessibility for people with communication challenges, an app will be made available in the next few months for people with sensory disabilities, Vatican News reported. The effort is being piloted for one year, and there are hopes of expanding it to include other sign languages.

Deacon Bruce Flagg, ordained this year as one of the few deaf deacons in the country, said he wanted to thank the pope for his “dedication to inclusion on behalf of the deaf throughout the world.”

“I feel as I am a direct recipient of his views in bring Christ to all people,” said the deacon, who ministers at St. Dominic’s Deaf Center in Houston.

The Chicago Catholic deaf community was also happy with the new Vatican outreach.

Jimmy Smith, a parishioner at the St. Francis Borgia Deaf Center, said he was “ecstatic” to watch Pope Francis’ audiences and Angelus addresses with an interpreter, which also made him feel more connected to his fellow Catholics.

“Before this, by the time we get the transcriptions, the discussions have come and gone. Now, no more,” he said in an email to Chicago Catholic, archdiocesan newspaper.

There are 5.7 million deaf or hard of hearing Catholics in the United States, according to the National Catholic Office for the Deaf.

Father Joe Mulcrone, director of the Archdiocese of Chicago’s Office of the Deaf, said the idea for providing more interpreters for deaf Catholics at the Vatican started during a 2018 encounter with Pope Francis and a group of pilgrims from the Deaf Catholic Youth Initiative of the Americas, a group the priest helped organize.

The group of about 120 people, including deaf Catholics from Chicago, made the trip to Rome to mark the 10th anniversary of a conference in Rome and an audience they had with Pope Benedict XVI.

After the June 27 audience with Pope Francis, the pope came to greet people and made his way over to the group of deaf Catholics. The group’s organizers arranged to have sign language interpreters on both sides of Pope Francis to facilitate communication.

“The amazing thing about the guy is he is not flustered by this stuff. There are these two women interpreters next to him and he’s like, ‘Fine. This is great,'” Father Mulcrone recalled.

“At that point, (Pope) Francis had this very intimate experience with sign language interpreters accompanying him. Not just being up there interpreting when he’s talking but being with him when he is meeting the deaf people.”

It was at the moment, an idea was born, said the priest who witnessed the exchange.

The pope turned to an aide and asked why there were no interpreters regularly at audiences and addresses. Then he turned to Sister Veronica Donatello, an Italian religious sister with ties to the Vatican and who works with deaf Catholics in Italy and asked her if she thought it was possible to have interpreters at his weekly audiences.

That started things moving, Father Mulcrone said. More support for providing better access to people with disabilities around the world came from Pope Francis’ 2020 message for the International Day of Persons with Disabilities, where he said he wanted “to make available suitable and accessible means for handing on the faith.”

Around this time, Sister Donatello reached out to Father Mulcrone and others working in the deaf community asking if they thought it was possible to provide interpreted videos of the pope’s weekly audiences and Angelus addresses.

“We’re here all going, ‘Sure, technologically it’s relatively easy to do,'” he said.

Then the question surfaced of finding the resources to pay for the interpreters. That is where the St. Francis Borgia Deaf Center helped. Father Mulcrone found someone willing to donate $5,000 to get things started.

“All through this, the Vatican was like, ‘Hey, this is great.’ We really didn’t run into any kind of roadblocks,” he said.

Father Mulcrone, who has worked in the deaf community since 1977, emphasized the importance of deaf people having this kind of access to Pope Francis.

“If a hearing person who is Catholic can have access to the leader of our church, shouldn’t a deaf person, who is a baptized Catholic, have the same access?” he asked.

Contributing to this story was Joyce Duriga in Chicago.