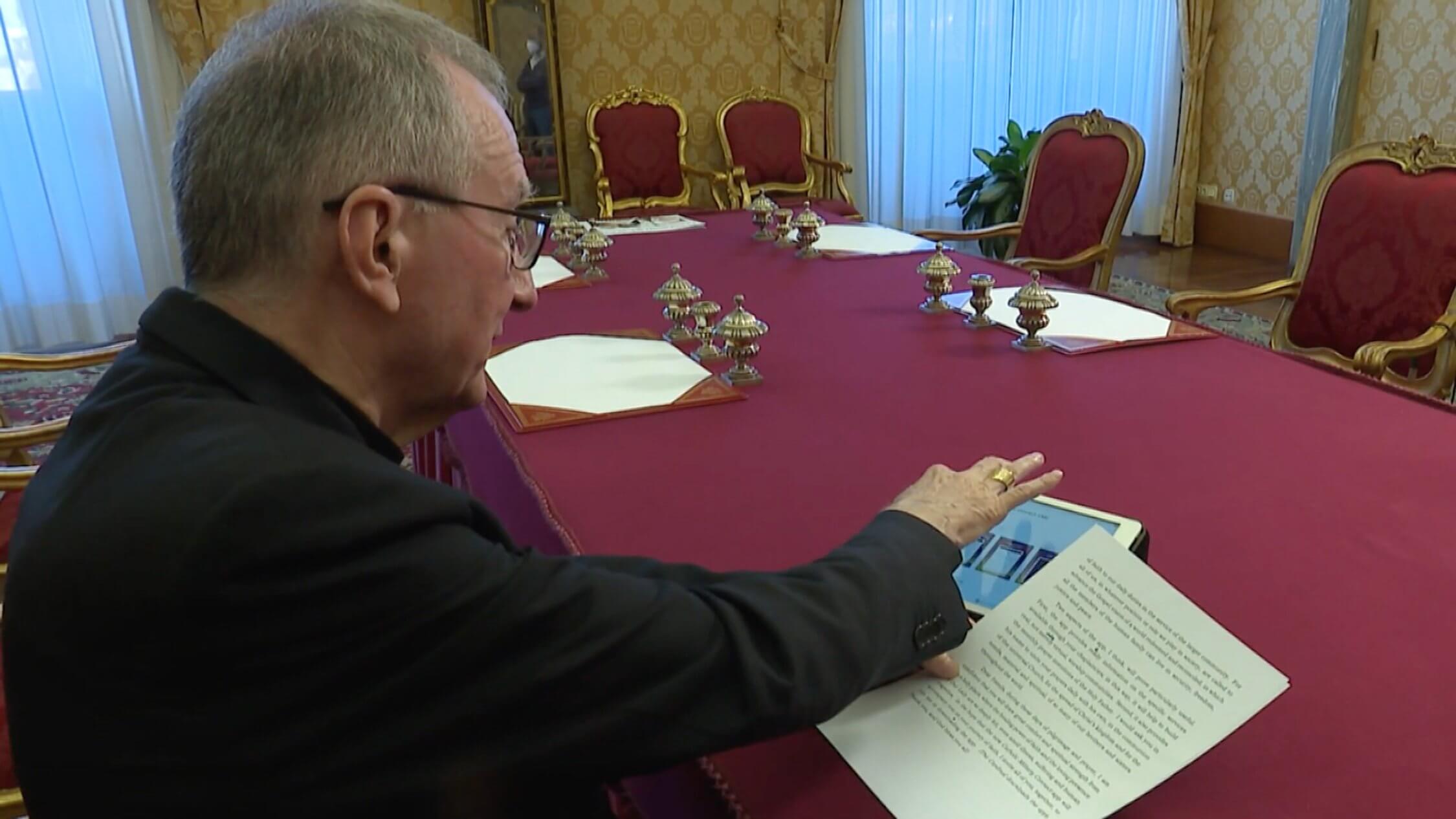 Photo Credit: CNS/courtesy Tweeting with God - Cardinal Pietro Parolin, Vatican secretary of state, launches the "Catholic Military Connect" app at the Vatican in this still image taken from a video released May 13. The app provides easy access to answers to military questions, prayers for the military, testimonies and connects military personnel with chaplaincies throughout the world.

Cardinal Pietro Parolin, Vatican secretary of state, encouraged men and women in the military to download a new app designed to connect them to the Catholic faith and provide the consolation of prayer in times of war and uncertainty.

In a video message to active-duty and veteran military personnel attending an annual pilgrimage in Lourdes May 13, Cardinal Parolin said the “Catholic Military Connect” app is a useful tool that “will accompany you on your journey of faith.”

“I believe that the app will be immensely helpful to all military personnel and, in a particular way, to young men and women who in this important sector of civil service, seek to grow in personal friendship with Jesus Christ and in the understanding and appreciation of the beauty and richness of our Catholic faith,” he said.

The app, which is available for free in Google Play and Apple App stores, was developed by the Apostolat Militaire International, an organization dedicated to promoting Christian values in military life, and Tweeting with God, an initiative that informs users on questions on faith.

The Catholic Military Connect app provides easy access to “answers to military questions, prayers for the military, testimonies, inspiring quotes and spiritual first aid,” according to a May 13 press release.

“In this difficult time, it is important to disseminate the Catholic Military Connect app to meet the spiritual needs of Catholic military personnel and give them comfort in whatever theater of operation they find themselves in,” the statement said.

In his message, Cardinal Parolin conveyed greetings from Pope Francis “who has often spoken of the dignity and the importance of the military services for the promotion of the cause of peace.”

“Your vital role in promoting the cause of peace, freedom and the common good has become all the more evident in recent weeks, even amid the tragedy of war, in the role you have played in the large-scale planning and provision of humanitarian aid to so many of our displaced and suffering brothers and sisters,” he added.

The Italian cardinal said that in an “increasingly digital world,” the Catholic Military Connect app can help members of the armed forces share and build “a sense of fellowship in our shared faith, our pursuit of holiness and our efforts to bring the light of faith to our daily duties in the service of the larger community.”

The app, which also connects military personnel with chaplaincies around the world, “will prove particularly useful” and “help to build real, not merely virtual, worship communities,” Cardinal Parolin said.

“All of us, in whatever position or role we play in society, are called to advance the Gospel vision of a world redeemed and reconciled, in which all the members of the human family can live in security, freedom, justice and peace,” he said.