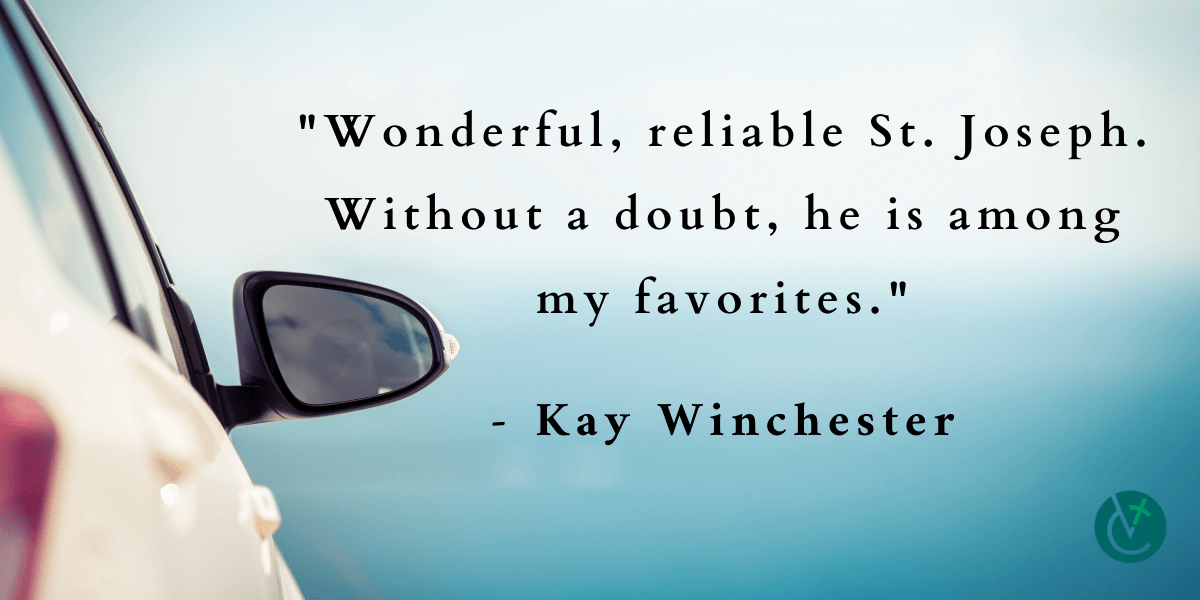 I have read a lot of stories about miracles and favors attributed to St. Joseph, and they are all wonderful indeed.  The one I am about to tell, however, is my favorite, mostly because it happened to me.

It took place over thirty years ago on Route 15 in Essex Junction.  My husband and I were on our way home from work early one evening when the car – a big boat of a thing that he absolutely adored – began making the most dreadful clunking noises.  Although this was something that this particular vehicle was in the habit of doing, when the clunks were joined by a definite bucking and shimmying, my husband decided it was time to pull off the road to see what was going on.

Luckily, we ended up stopping across from an auto parts store.  As it turned out, the folks in that store had gotten to know my husband and this car pretty well, so I wasn’t surprised when he returned a few minutes later with a couple of tools they had loaned him to deal with whatever was amiss.

Now properly equipped, he dove under the car and began banging away at things automotive.  In the meantime, I happened to look out the window at the sky overhead.  To my horror, it was beginning to fill up fast with big, dark, angry thunder clouds, coming straight at us off Lake Champlain.  I realized that if my husband didn’t get that clunk taken care of in the next few minutes, he was going to be caught in a terrible deluge flowing under a non-functioning vehicle.

To make matters worse, the repair was apparently not going well.  Something that needed to come loose was stubbornly frozen into place and all his banging, yanking and twisting hadn’t helped a bit.  As he came up to give me a progress report, he said, “If you know someone, now would be the time.”  He then disappeared back underneath the vehicle.

I knew what he meant for me to do, so I began thinking frantically of which saint I could ask for help.  In seconds it came to me; Joseph would certainly know what it was like to travel with the family and come upon troubles along the way.  So up went the prayer:  “Joseph, my husband needs your help.  Anything you could do would be greatly appreciated. Thank you.”

Ten seconds went by.  Then my husband came up from under the car again, but this time he had the most incredulous look on his face.  “I don’t know who you just talked to,” he said.  “But that thing that was stuck just fell off in my hand.”  Within about five minutes, the repair was done and the clunking was gone.  My husband dutifully returned the borrowed tools and got back into the car.  Just as he shut the door, the first raindrops began to splatter against the windshield.

Wonderful, reliable Saint Joseph. Without a doubt, he is among my favorites.