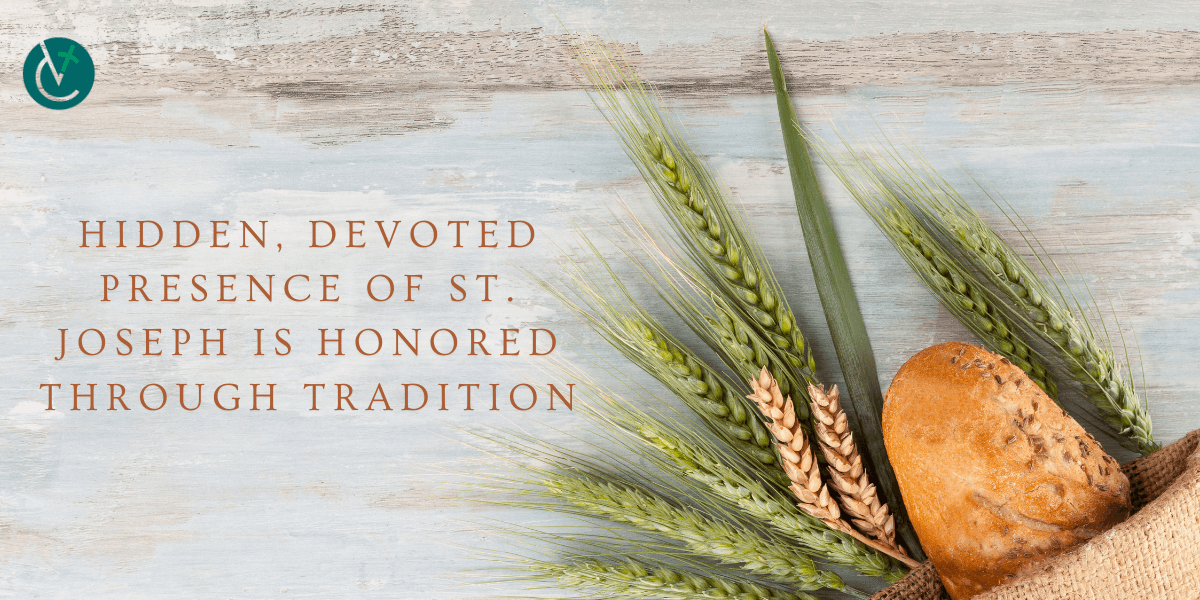 The hidden, devoted presence of St. Joseph is honored through tradition

The Latin phrase, “Ite ad Joseph” has long served as an encouragement by the Church for the faithful to seek the intercession of St. Joseph. The history of the phrase begins In the Book of Genesis, when Pharaoh instructs the people who are suffering through a terrible famine to, “Go to Joseph; what he says to you do.”

At that time, Pharaoh was referring to Joseph, the youngest of the 12 sons of Jacob, who was sold into slavery in Egypt by his brothers but rose to a position of prominence there because of his wisdom and virtue.

When Pope Francis declared a Year of St. Joseph to mark the 150th anniversary of the proclamation of St. Joseph as the patron of the Universal Church, he was again encouraging the faithful to go to Joseph—St. Joseph, husband of Mary and foster father to Jesus, for intercession in times of need and to honor the saint’s role as humble protector of the Holy Family. The Year of St. Joseph runs from Dec. 8, 2020, until Dec. 8, 2021.

“Each of us can discover in Joseph—the man who goes unnoticed, a daily, discreet and hidden presence—an intercessor, a support and a guide in times of trouble,” wrote Pope Francis.

Since the beginning of the Church, a variety of legends and traditions have developed around St. Joseph, many from ancient oral traditions, and while they are not based in Scripture they all highlight one or more of St. Joseph’s virtues, his integral role in the life of Christ and the Church, encouraging us always to “go to Joseph.”

One of the favorite traditions to honor St. Joseph sprung out of a fearful time in Sicily when a serious drought threatened the lives and livelihood of villagers. The people turned to St. Joseph in prayer, asking for relief from the drought. The rain came, and when all that was planted grew and the harvest was completed, the people created a great table of abundance for the entire community in thanksgiving for answered prayers.

Foods of all kinds, especially made from the harvested crops, filled the table which was designed with great symbolism, often with tiers and a statue of St. Joseph at the top, giving the image of a ladder to heaven. Breads made into various shapes of symbols of faith were an important part of the table, as were flowers, candles and a variety of meaningful gifts.

As Italians immigrated to the U.S. they brought this tradition with them, encouraging hospitality and a devotion to the saint who played such an important role in saving the residents of Sicily. Today, the tradition of the St. Joseph table is often celebrated in homes, parishes or community centers, with a portion saved and distributed to those in need.

Many paintings or statues of St. Joseph depict the saint carrying a staff from which flowers are blossoming. The legend behind these images suggests that when it came time for Mary to marry, the high-priest Zechariah received a revelation from God instructing him to have all the men who were eligible for marriage to leave their staffs in the Temple overnight. A sign from God would reveal which man would be Mary’s husband.

In the morning, Zechariah discovered that Joseph the Carpenter’s staff had blossomed with flowers, signifying that he was to become Mary’s husband. Other versions of the legend say that a dove landed on the staff to show God’s choice of St. Joseph.

In the 19th century book, “Life and Glories of St. Joseph,” author Edward Healy Thompson states that the cloak of St. Joseph, considered a relic, was kept in the ancient church of St. Anastasia in Rome built around 300 A.D.

The possibility of such a relic played a part in creating a popular devotion to St. Joseph entitled the Holy Cloak Novena. The novena consists of a series of prayers said for 30 consecutive days as a reminder of the 30 years St. Joseph is believed to have lived as Jesus’ earthly father.

In his encyclical on the devotion to St. Joseph, Quamquam Pluries, Pope Leo XIII wrote, “It is natural and worthy that as the Blessed Joseph ministered to all the needs of the family at Nazareth and girt it about with his protection, he should now cover with the cloak of his heavenly patronage, and defend, the Church of Jesus Christ.”

The White Cord of St. Joseph

In 1657 in Antwerp, Belgium, the miraculous cure of an Augustinian nun named Sister Elizabeth, a nun with a great devotion to St. Joseph, served as the foundation for a special devotion: The White Cord of St. Joseph.

Sister Elizabeth had been severely ill for a number of years with no hope of a cure from doctors. While they expected her to die, she made a cincture with white cord, had it blessed by a priest in St. Joseph’s honor, and wore it around her waist. Days later, as she prayed, her pain disappeared and she got better

Her recovery was considered miraculous and devotion to St. Joseph through the white cord spread, not just for physical healing but for purity of body and soul, chastity and help in the hour of death.

The long white cotton cord is meant to have seven knots tied on one end to reflect the seven sorrows and joys of St. Joseph, The Glory Be is prayed seven times daily in honor of St. Joseph.

This devotion was approved by the Sacred Congregation of Rites in 1859, and was also blessed and approved by Pope Pius IX.

A Saint for All Times

Speaking about St. Joseph, St. Thomas Aquinas wrote, “Some Saints are privileged to extend to us their patronage with particular efficacy in certain needs, but not in others; but our holy patron St. Joseph has the power to assist us in all cases, in every necessity, in every undertaking.”

In his Apostolic Letter, Patris Corde: With a Father’s Heart, Pope Francis explains his desire for the faithful “to increase our love for this great saint, to encourage us to implore his intercession and to imitate his virtues and his zeal.”