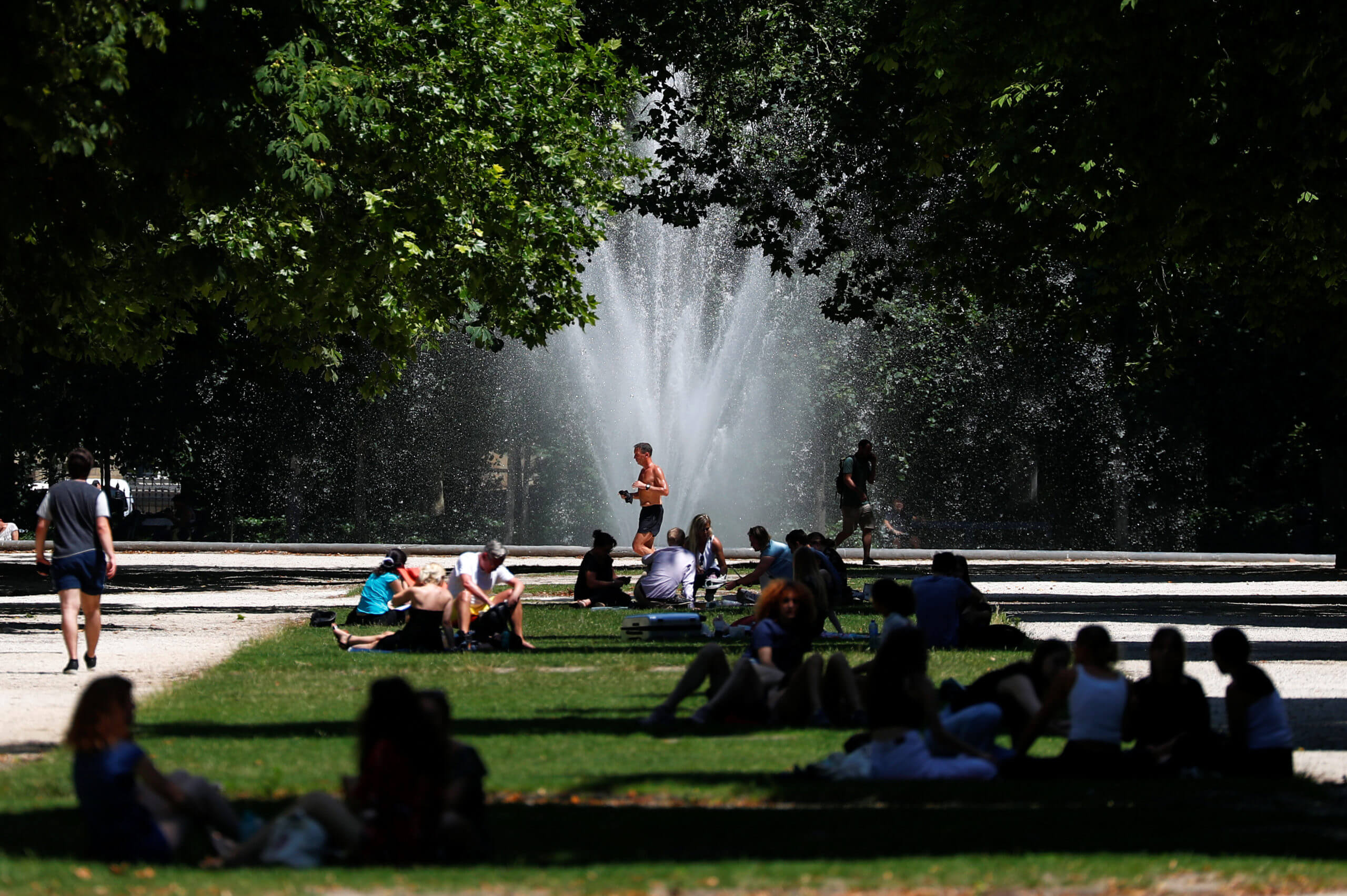 Photo Credit: CNS photo/Francois Lenoir, Reuters - People cool off in the shade near a fountain during a hot summer day in Brussels.

Responding to editors’ requests for a regular sampling of current commentary from around the Catholic press, here is an editorial titled: “Summer heat and cool air” which appeared July 15 on the website of The Compass, newspaper of the Diocese of Green Bay, Wisconsin. It was written by Sam Lucero, news and information manager.

Those lazy-hazy-crazy days of summer that Nat King Cole sang about are upon us, along with high temperatures. The first week of July saw the thermometer hit 90 degrees in Green Bay for five consecutive days. What are cold-climate Wisconsinites supposed to do?

The irony, however, is that the electrical power needed to cool our air contributes to climate change and global warming. According to the Department of Energy, three-quarters of all U.S. homes have air conditioners which use about 6 percent of all electricity produced in the country — at an annual cost of about $29 billion to Americans.

The desire to cool our air results in about 117 million metric tons of carbon dioxide being released into the air each year, according to the Department of Energy.

In his 2015 encyclical, “Laudato Si’,” Pope Francis decried climate change brought on partly by a resistance to “sustainable and integral development.”

“Humanity is called to recognize the need for changes of lifestyle, production and consumption, in order to combat this (global) warming or at least the human causes which produce or aggravate it,” he wrote.

Pope Francis gives the example of countries and industries not willing to develop new technology to slow down the degradation of “mother earth.”

“People may well have a growing ecological sensitivity, but it has not succeeded in changing their harmful habits of consumption which, rather than decreasing, appear to be growing all the more,” he wrote. “A simple example is the increasing use and power of air-conditioning. The markets, which immediately benefit from sales, stimulate ever greater demand. An outsider looking at our world would be amazed at such behavior, which at times appears self-destructive,” the encyclical says.

Pope Francis does not call for a boycott of this modern technology, as some critics of his encyclical have charged. The problem is that the same technology Willis Carrier, an American engineer, used to create the first air conditioner in 1902 is similar to what is used today.

“Everything is still based on the vapor compression cycle; same as a refrigerator. It’s effectively the same process as a century ago,” Colin Goodwin, the technical director of the Building Services Research and Information Association, told The Guardian in a 2019 report titled, “The Air-Conditioning Trap: How Cold Air Is Heating the World.”

“What has happened is we’ve expanded the affordability of the air conditioner, but as far as efficiency, they’ve improved but they haven’t leaped,” he added.

There is no doubt that air-conditioning has been an essential part of economic growth in many tropical and desert climates in the world. In this country, places like Las Vegas and Miami would not exist as they are today without air-conditioning.

Air-conditioning also saves lives. Heat waves around the world reportedly claim about 12,000 people a year. This number could soar to more than 255,000 people by 2050, according to the World Health Organization.

The United Nations, like Pope Francis, is calling for more ecologically friendly air conditioners. The U.N. Environment Program is promoting a “United for Efficiency” (U4E) program that seeks to help developing countries that are building their economies. The focus is on energy-efficient appliances and equipment.

“Today, less than 10 percent of people in developing and emerging economies own air conditioners,” U4E reports. “As economies and populations grow, it is expected that energy used for space cooling will triple by 2050.”

One important development, called the Global Cooling Prize, was launched in November 2018 by a global coalition. This group, which includes the government of India and the Rocky Mountain Institute, seeks to spur the development of “a radically more efficient, climate-friendly residential cooling solution.”

Last year, they announced the finalists in this “Global Cooling Prize.” Eight teams from around the world were chosen to develop and ship their prototypes to India for testing this summer. The winner will be announced next October, with a monetary prize of $1 million.

Global Cooling Prize organizers say a breakthrough technology “has the potential to prevent 75 gigatons of CO2-equivalent emissions by 2050.”

While enjoying the remaining days of summer, let’s do our part to stay cool while not overusing our air-conditioning units. Use a fan, open windows, stay in basements. When necessary, turn on the air, but keep the temperature at a moderate level. Every small act helps to slow the process of global warming.