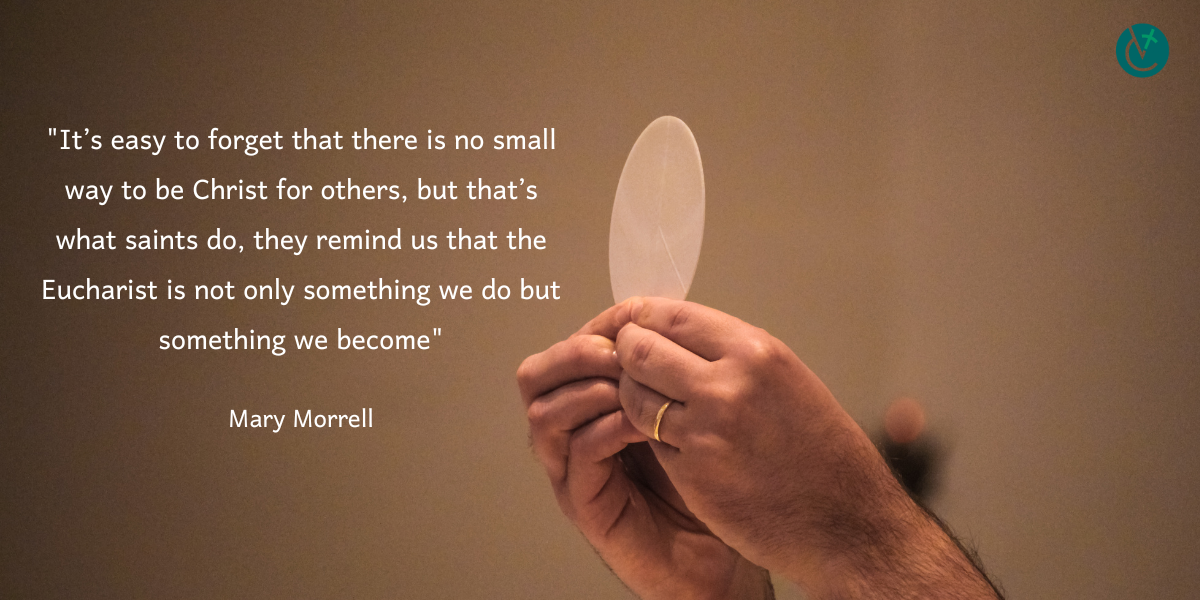 Remembering what it means to be a eucharistic people

As a long-time Catholic catechist of children and adults, I knew what the Church teaches about Eucharist, about the Mass and about the Real Presence of Jesus. But there were times when I didn’t fully grasp what it meant for how I lived my life and my relationship with others.

Fortunately, there are also times in life when faith formation happens in unexpected ways — when a person, an event, a book, a movie, a song or a homily enters our lives, and a new revelation about faith breaks through.

For me it was the powerful movie “Romero” which portrayed the transformation of Archbishop Oscar Arnulfo Romero from a timid, orthodox, predictable cleric to a martyr defending human rights, justice and peace for the Salvadoran people.

There is a powerful scene in the movie where Archbishop Romero and the people of a small village face down armed soldiers occupying the village church. His first failed attempt results in machine gun spray that destroys the tabernacle, sending the hosts to the floor in all directions.

Forcibly removed, the archbishop looks out at the faces of the villagers who have placed their hope in him and strides back into the church past the soldiers and drops to his knees at the altar, gathering the hosts as quickly as possible into his hands and arms.

Again, a volley of gunfire is directed at him and the altar. He crouches lower in fear but continues to protect Jesus in the Blessed Sacrament until a soldier knocks him to the floor and forces him out, only to have him return wearing his priest vestments, followed by the villagers who, in an act of defiance and faith, enter the church together, ignoring the soldiers and their guns.

Archbishop Romero stands near the altar with the intention of celebrating Mass and declares that they have come to “retake possession of this church building and to strengthen all those whom the enemies of the Church have trampled down. You should know that you have not suffered alone, for you are the Church. You are the people of God. You are Jesus, in the here and now. He is crucified in you, just as surely as He was crucified 2,000 years ago.”

I sobbed, not only because of the emotional power of the scene but from an uncomfortableness that was painful. True, it is unlikely I will ever find myself in the position of Archbishop Romero to face violent, ruthless guards in order to protect the Eucharist, but I found myself wondering if I could do it, would I do it, if the occasion presented itself.

Could I risk my life to raise my voice for the marginalized so they could live in justice and peace? What was I really doing with my life as a Christian? And there was the pivotal word – doing.

The same questions arose among my adult faith formation classes every time we watched the movie together as did one repeated phrase – it made me uncomfortable. We each had a sense that we could be doing more as members of the Body of Christ.

It’s easy to look at our lives and think we are not doing much, in comparison to people like St. Oscar Romero or Servant of God Dorothy Day, but in watching “Romero” and sharing insights with others, we were reminded that the Eucharist compels us to accompany others, to feed the hungry, give shelter to the homeless, love the outcasts and walk with them on their journey, especially when it’s a difficult one.

We do that when we are present to others, when we give them hope, when we feed their spirits or their bodies or listen to their stories, as well as when we raise our voices and fight against injustice.

It’s easy to forget that there is no small way to be Christ for others, but that’s what saints do, they remind us that the Eucharist is not only something we do but something we become.