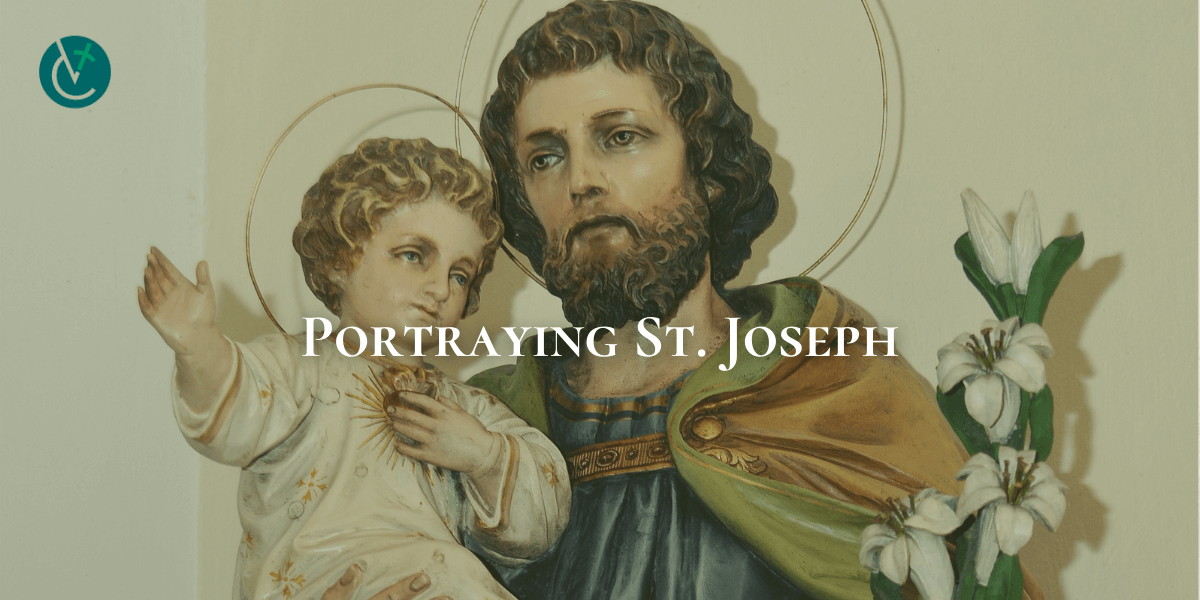 It could be said that except for Jesus and the Blessed Virgin Mary, no one has been portrayed in art more than St. Joseph.

From a statue at St. Joseph’s Oratory in Montreal carved in Carrara marble by Italian artist A. Giacomini to the simplest of inexpensive nativity sets featuring the Holy Family found in many homes throughout the world, images of St. Joseph are plentiful. Statues, icons, mosaics, paintings, bas reliefs and drawings all portray the foster father of Jesus through the eyes of their creators and often with the physical characteristics of the artist.

Many of the images of St. Joseph that we see feature him alone, holding a staff abloom in lilies, symbolizing his purity. We see him holding the Child Jesus in some images, with Mary and Jesus in others. Some artists have portrayed St. Joseph at work as a carpenter, while others have set him in Nativity, Flight into Egypt, Adoration of the Magi or Presentation of Jesus in the Temple scenes.

One image, said to be a favorite to Pope Francis, is that of St. Joseph asleep, perhaps dreaming of the angels that told him to take his family to Egypt or perhaps simply tired from hard work.

Some examples of St. Joseph in paintings include:

+ Joseph the Carpenter, an oil painting by Georges de La Tour created about 1642. It depicts a young Jesus with St. Joseph.

+ The Madonna with Beardless St. Joseph, an early painting by Raphael, produced about 1506. It depicts St. Joseph, the Virgin Mary and the baby Jesus.

+ St. Joseph Seeks a Lodging at Bethlehem, an opaque watercolor painting over graphite created by James Tissot between 1886 and 1894, depicts Mary and Joseph looking for a room when Mary was near to giving birth to Jesus.

+ The Presentation at the Temple is a painting by Ambrogio Lorenzetti, signed and dated 1342, one of the largest works by the Italian medieval painter.

+ The Doni Tondo or Doni Madonna by Michelangelo circa 1507 portrays the Holy Family in the foreground with John the Baptist in the middle-ground.

Some examples of statues of St. Joseph include:

+ St. Joseph with the Infant Jesus statue done by José de Nazaret Santos in the 1940s shows Jesus standing next to his foster father and holding his hand.

+ The statuary of the Knock Apparition of St. Joseph, Mary and John the Baptist in 1879 was commissioned by the Knock Shrine Society in 1960 and carved in Carrara marble by Italian sculptor Lorenzo Ferri. It is located at Knock Shrine in Ireland.

+ The National Shrine of St. Joseph on the St. Norbert College campus in De Pere, Wisconsin, features a statue of St. Joseph holding the Child Jesus, both wearing a crown.

St. Joseph icons depict him in various ways including as a carpenter, with the Child Jesus sitting on his shoulders, holding his son, holding doves and bending his head to touch that of his son.

Throughout the portrayals of St. Joseph, he can be seen as a loving, strong, gentle man.

If you would like a statue, icon or print of St. Joseph, religious goods stores and online vendors have myriad options.