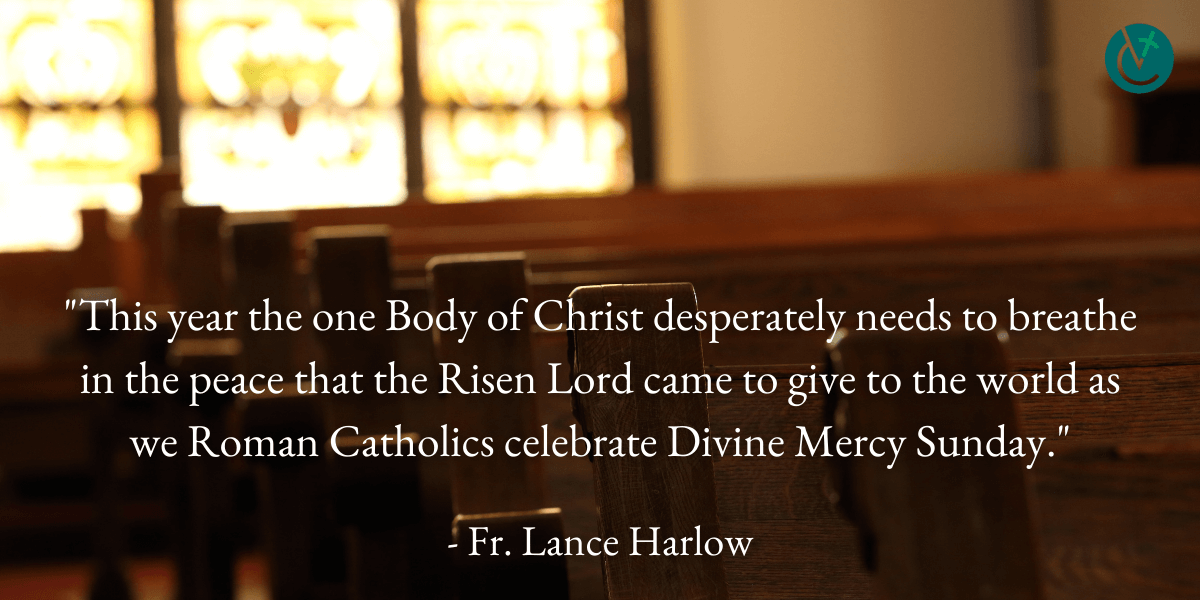 Peace be with you

On the evening of that first day of the week, when the doors were locked, where the disciples were, for fear of the Jews, Jesus came and stood in their midst and said to them, “Peace be with you.” When He had said this, He showed them His hands and His side. “The disciples rejoiced when they saw the Lord.  Jesus said to them again, “Peace be with you. As the Father has sent me, so I send you. And when He had said this, He breathed on them and said to them, “Receive the Holy Spirit” (Jn 20:19-22).

This year two significant holy days converge in the Roman Catholic Church and the Orthodox churches. In the Roman Catholic Church, April 24 is Divine Mercy Sunday. In the Orthodox churches it is Easter Sunday. It is not insignificant that the Easter focus of Christians from both East and West this year should be for peace, considering the current situation in the Ukraine [at the time of this writing].

Jesus and the Apostles lived during the occupation of the Roman Empire throughout the known world, replete with political oppression and exploitation of its various conquered cultures with an ever-present agenda of expansion. That expansion included a lot of deaths.  Jesus Himself was murdered on Good Friday, and the Apostles thought that they were going to be next. However, His resurrection from the dead on Easter Sunday gave proof to the world of His victory over sin and death. He, the King of Heaven and Earth, cannot be conquered by any worldly power boasting to be greater than He. Various attempts by oppressors both ideologically and politically have tried to suppress and eliminate Him for 2,000 years and still do so today.

As we face more human suffering, it can be difficult to believe that Jesus’s resurrection has made any impact on the world. The Apostle Thomas, in John 20:22-31, disbelieves that his confrères have seen the Risen Lord. Fear, doubt and disappointment weigh down heavily upon his spirit.  Jesus, however, appears on the scene announcing peace: “Shalom.” Significantly, He shows them the death wounds inflicted upon Him by His defeated oppressors which now exist in His living, glorified body. These marks of torture no longer belong to the domain of evil doers — they have been reclaimed for life in the Kingdom of God — an eternal life in Heaven which is the ultimate goal of humanity. Thomas will need to be convinced of that truth.

Sometimes we do, too.

St. John Paul II expressed in his encyclical “Ut Unum Sint” that the Church should breathe with two lungs: that is, that Christianity in both the East and the West should share “a vision of communion that finds unity in legitimate diversity.” When we breathe as one body with both lungs, as Roman Catholics and Eastern Orthodox, then we are stronger and healthier.

This year the one Body of Christ desperately needs to breathe in the peace that the Risen Lord came to give to the world as we Roman Catholics celebrate Divine Mercy Sunday. And on this Orthodox Easter, may peace be especially with our brothers and sisters in the Ukraine.