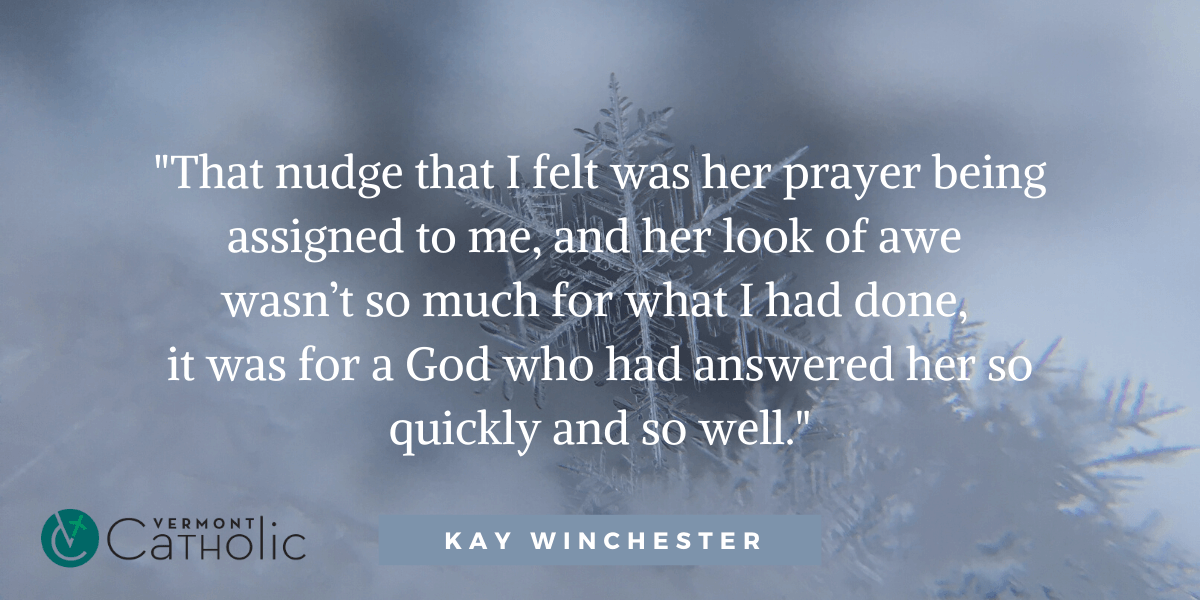 It all started with a particularly nasty overnight snow and ice storm.

I was in my early twenties at the time, so walking up the slick sidewalks in Burlington that morning posed a bit of a challenge, but nothing more. My socks were warm, the tread on my boots was good, and my knees were still doing what they were supposed to. Yes, it was slippery, but if I did fall, I thought, no real harm would be done – I’d probably mostly bounce.  So on I trudged to my first class of the day.

I was about half-way up Pearl Street when I noticed the elderly woman standing in the street.  As I got closer, I saw that she was poised at the edge of a curb cut, a slight incline which, covered as it was with glare ice, must have seem as formidable to her in that moment as a hike up the Himalayas.  Tiny and frail, I knew just by looking at her that she would not bounce at all if she fell – likely she would break a hip, and she knew it too.

It was in that instant that I got what can only be described as a nudge, a quiet but compelling voice that said, “Help her.” It was such an obvious thing to do that I didn’t have to be asked twice, so as I came abreast of her, I said, “Here, let me help you.”  I reached out my hand, took firm hold of hers and virtually lifted her to the relative safety of the sidewalk.

That’s when the unexpected thing happened. It wasn’t so much that she thanked me – which she did – but it was the look on her face when she did it. There was gratitude there, but there was also more than a tinge of what can only be called awe. I really hadn’t done that big a thing, so her response seemed a bit unusual; however, I just smiled at her and continued on my way.

I think I was a full 15 paces further up the hill before I realized what had just happened.  As the woman had stood in the street, fearful of the ice and its almost inevitable consequences for her, she had been doing the most instinctive thing she knew to do – she prayed to God for help.  That nudge that I felt was her prayer being assigned to me, and her look of awe wasn’t so much for what I had done, it was for a God who had answered her so quickly and so well.

As for me, to say I felt humbled would be an incredible understatement. God had asked me to help answer a prayer and I had done it, which then made me wonder how many times I had ignored that nudge in the past. How many prayers had been delayed, not because God wasn’t listening, but because I wasn’t?  And have I, in the years since, learned to listen better?