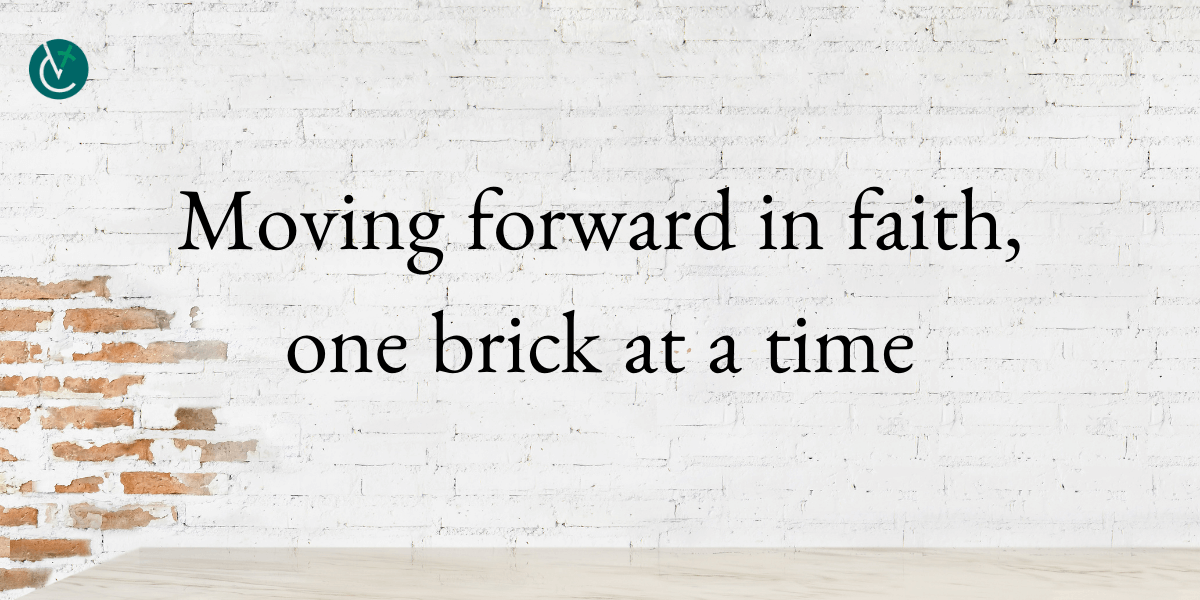 Moving forward in faith, one brick at a time

As someone in the communication field, it’s important to keep up with the news. But honestly, I must limit my consumption because it’s bad for my health.

There’s one news outlet on my phone that has so many doom and gloom stories in rapid succession that I click off feeling like the world is coming to an end.  I made the mistake of reading through it this morning. There it was again, that sense of hopelessness beginning to creep in.

Then I remembered that my 10-year-old grandson is digging a hole in the backyard.

The subject came up recently as we sat at the kitchen table trying to unravel the mystery of fractions.

Noticing the dark clouds gathering over the backyard, he said, “I hope the storm doesn’t fill up my hole.”

I asked him why it was such a concern for him, as it was only a hole in the ground. He seemed genuinely surprised I would have to ask such a question. “You know it took me three years to dig!”

As the story goes, at some point a decision to dig a hole, removing one small shovel full of dirt after another, became a decision to keep digging and create a bunker. He got help from one of his younger brothers and a few neighborhood kids, and today two children his age can stand in the hole chest deep. He’s now trying to enlist his Pop to help him shore up the sides for safety.

I smiled, not just at his enthusiasm for his project, but because I realized I now had a go-to “parable,” with him at the center of the story, to remind him of the importance and value of taking one small step at a time to reach a goal. I wondered how long it would be before he started rolling his eyes whenever I brought it up. “Remember when you were digging that bunker in the backyard?”

Whether it’s learning fractions, mastering a talent, developing a skill or overcoming a fear, the idea that it can, and will, happen one small step at a time can go a long way in dispelling the discouragement children often feel when they struggle with something.

And let’s be honest. Discouragement is an adult issue, too.

Not only do we often feel the pressure of wanting to be the best we can be at whatever we are doing, our hearts — and our faith — compel us to make a positive difference where there is a need. But, year after year, it seems easier to become overwhelmed by the needs of the world, the community, our parishes, our poor, so much so that we are never sure how to move forward.

But every journey begins with the first step.

As an adult still trying to figure out how I might accomplish something meaningful in life, I find encouragement in the life and words of Servant of God Dorothy Day, social activist, writer and Catholic convert whose Catholic Worker Movement and “houses of hospitality” would serve the poor and hungry in some 200 communities.

Day, whose process for canonization is moving forward, wrote, “One of the greatest evils of the day is the sense of futility. Young people say, ‘What can one person do? What is the sense of our small effort?’ They cannot see that we can only lay one brick at a time, take one step at a time; we can be responsible only for the one action of the present moment. But we can beg for an increase of love in our hearts that will vitalize and transform these actions and know that God will take them and multiply them, as Jesus multiplied the loaves and fishes” (Catholic Worker, September 1957).

Even today, living with the fallout of a seemingly never-ending pandemic, this very special woman who lived fully the virtues of faith, hope and charity, keeps me walking forward and building with my little bits and pieces, even on those days when I feel like, “What’s the use?”

When we understand the power of a single step, a shovelful of dirt, a small gift of personal presence, both children and adults are empowered to move forward in faith and build something beautiful one brick at a time.

— Originally published in the Fall 2021 issue of Vermont Catholic magazine.