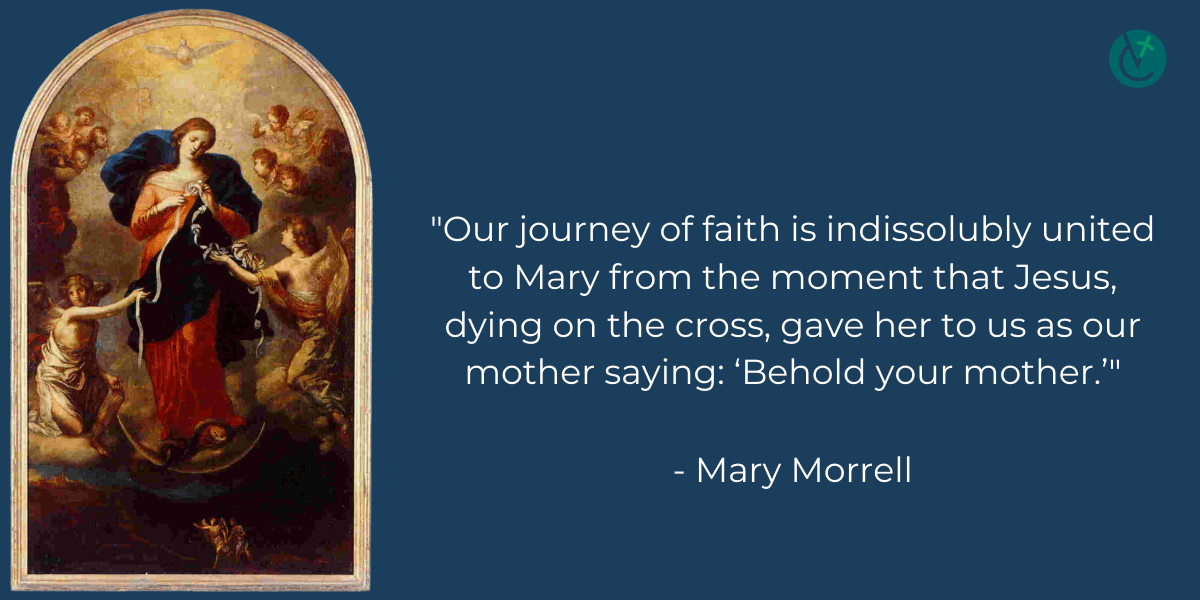 Mary as Mother of God, Theotokos, is Church dogma adopted by the Council of Ephesus in 431. Soon after, the building of churches founded in her name blossomed, with the earliest church dedicated to Mary dating to the fourth century in Syria. Ruins show it was dedicated to the Theotokos.

Today, there are an inestimable number of churches around the world dedicated to Mary under any one of her many titles, from the Basilica of The National Shrine of Our Lady of Aparecida in Brazil, one of the largest churches in the world, to the Chapel of Santa Maria Reina de Paz (Queen of Peace), built out of metal storage containers and located on the Chilean military base of King George’s Island, Antarctica, serving an average population of 100.

Mary’s titles stem at their core from her relationship with Jesus, but reflect, also, her relationship with humanity and with the Church, for whom she is mother. Some titles are attributed to first use by saints, as in Mary Help of Christians, by St. John Chrysostom, and Stella Maris, Star of the Sea, by St. Jerome. Others arise from pious tradition or from geographic locations of the faithful.

Countries, cities and Dioceses have taken her as their patroness. America claimed Mary under her title of Immaculate Conception as patroness of the United States. Religious orders are named in her honor, as are shrines, prayers and hymns. Hundreds of years of religious art and sculpture portray her role in the life of the Church and the lives of those who love and honor her.

Msgr. Richard LaValley, pastor of St. Francis Xavier Parish in Winooski, is among them. During the 57 years of his priesthood, he has had a great devotion to Mary, particularly under the title of Our Lady of Perpetual Help, signifying Mary’s role as intercessor. Still, Msgr. LaValley loves to talk about Mary no matter how she is honored — through her Immaculate Conception or Ascension, both dogmas of the Church, or the Annunciation, her “yes” to God, or with her many feast days.

“There are many titles, but just one woman, one Mary,” he said. “I like to talk about Our Lady of the Gospel. I don’t think we should rob her of her humanity.”

Sharing his insights on the Annunciation, Msgr. LaValley pointed to Mary’s trust in God, in God’s plan for her and the world. He reminds people that “whenever we receive Holy Communion, whenever we say ‘yes’ to God, we choose God’s plan over our own and ‘Jesus happens.’”

Msgr. LaValley also encourages those who are returning to confession after a long time to turn to Mary.

“As people began coming back to the sacrament after a hiatus from the Church, I began to realize a lot of people forgot how to do it or have never done confession face to face. They fear they will do it wrong, and wonder ‘How far do I go back?’ ‘Is the priest going to get mad at me?’” he said.

“I encourage those people to come to confession with me and simply say, ‘Our Lady sent me.’ Our Lady is a mother. Our Lady brings everyone to Jesus; everything we need to learn we learn from her.”

Pope Francis, like so many popes before him, also has a great devotion to Mary. Two of his favorite images of Mary are the Madonna of Rome (Salus Populi Romani) and Mary, Undoer of Knots.

On the morning following his election, Pope Francis slipped out of the Vatican to pray before the icon of Salus Populi Romani. When later speaking of Mary as Madonna of Rome, he said she “is the mother who gives us health in growing, in facing and overcoming problems, in making us free for definitive choices; the mother who teaches us to be fruitful, to be open to life and to be ever more fruitful in goodness, in joy, in hope, to never lose hope, to give life to others, physical and spiritual life. Our journey of faith is indissolubly united to Mary from the moment that Jesus, dying on the cross, gave her to us as our mother saying: ‘Behold your mother.’”

— Originally published in the Spring 2022 issue of Vermont Catholic magazine.