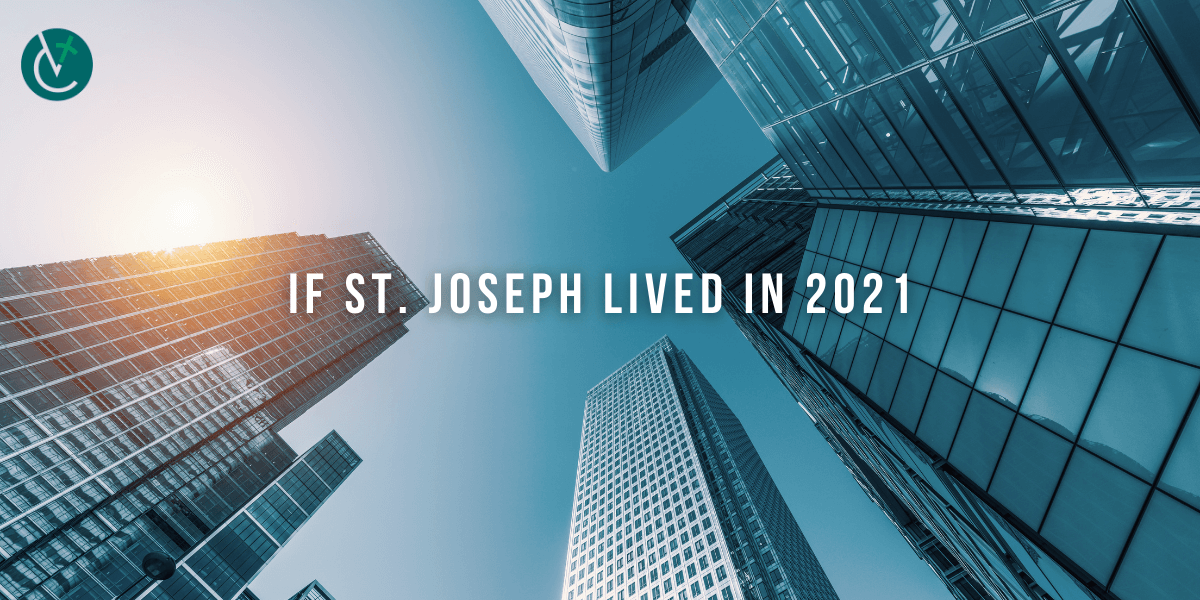 Sometimes, I wonder about the high standards set by individuals in the bible. How I would measure up if I had lived in the time and circumstances of that person? And I speculate about how that person from the bible would handle the circumstances in which I now live.

I invite you to explore how St. Joseph might handle contemporary America and its problems.

But before doing that, let’s consider what we know about Joseph from Sacred Scripture.

Joseph submitted to civil authority as is evidenced by traveling to Bethlehem, the city of his Davidic ancestry, in response to the order from the Roman Emperor Augustus. While in Bethlehem, Jesus was born.  Joseph also followed the prescriptions of the Jewish law including to worship at the temple at Passover and to present his son at the temple after birth.

But ponder this: Joseph was selected to be the foster father of Jesus and to be the husband of Mary, the Mother of Jesus, the Second Person of the Trinity. No small selection! So, we should consider Joseph not only to be a “just man” but a “just and holy man.” He had to be humble enough to submit to the instructions from the angel. There is no hint in scripture that Joseph was ever a militant or aggressive, or even a particularly assertive or dominant man. He appears to be a kind and gentle man.

At the same time, we can well imagine how Joseph might have reacted when life did not go his way. No anger, no blaming — just reacting with gentleness and silence and love. Just dealing with it! The realization that he could not get a clean room in which Mary might deliver the baby would have distressed any good father, especially when he had to camp out in the filthy shelter where animals were kept. Yet Joseph was powerless to do any better.

He could have been distressed at having to clothe Jesus in “swaddling clothes,” perhaps rags or maybe some sort of blanket. Yet he coped with it. He could have been upset when told to depart quickly with Mary and Jesus for an unknown future in Egypt and arriving in Egypt without a specific destination or means of support except for his own hands. The Holy Family was a refugee family, aliens in a foreign land. He coped with it and remained gentle throughout.

Now let us consider how Joseph might respond to some of the challenges in contemporary America.  He would surely respond with justice, holiness, humility, compassion and love as he did throughout his life. I think St. Joseph would recognize what he could accomplish by a life of virtue and not in judging others.

Out of obedience to civil authority and a sense of justice he would pay taxes. He would observe pandemic restrictions imposed by state and federal officials, even if those measures did not seem to make sense.  Likewise, he would follow the directives from his bishop regarding safe practices at Mass.

Out of respect for God and His creation, Joseph would surely minimize his adverse impact on the natural environment. He would demonstrate respect for all persons, especially for victims of discrimination and systemic injustice.  Specifically, Joseph might be particularly sensitive to the legal and illegal aliens in society, since the Holy Family lived as aliens in Egypt for about two years.  Out of a sense of charity and justice, he would not fall prey to today’s tribal politics, replete with the character assassination.

And when it comes to mundane human interactions, I suggest Joseph would treat others with mercy and compassion, not getting upset by someone taking his parking space or cutting ahead of him in line.  He would not get upset by the person hoarding his brand of disinfectant, paper towels or toilet paper when the grocery store is out of stock.

In this year dedicated to St. Joseph, he beckons us to imitate his total commitment to Jesus, to imitate his virtues, his attitudes and behaviors toward others.

—Deacon Pete Gummere serves at Corpus Christi Parish in St. Johnsbury and is director of deacons for the Diocese of Burlington. He is also a bioethicist.

–Originally published in the Spring 2021 issue of Vermont Catholic magazine.

It is fitting that a man who was once denied entrance to a great cathedral because of his race [...]