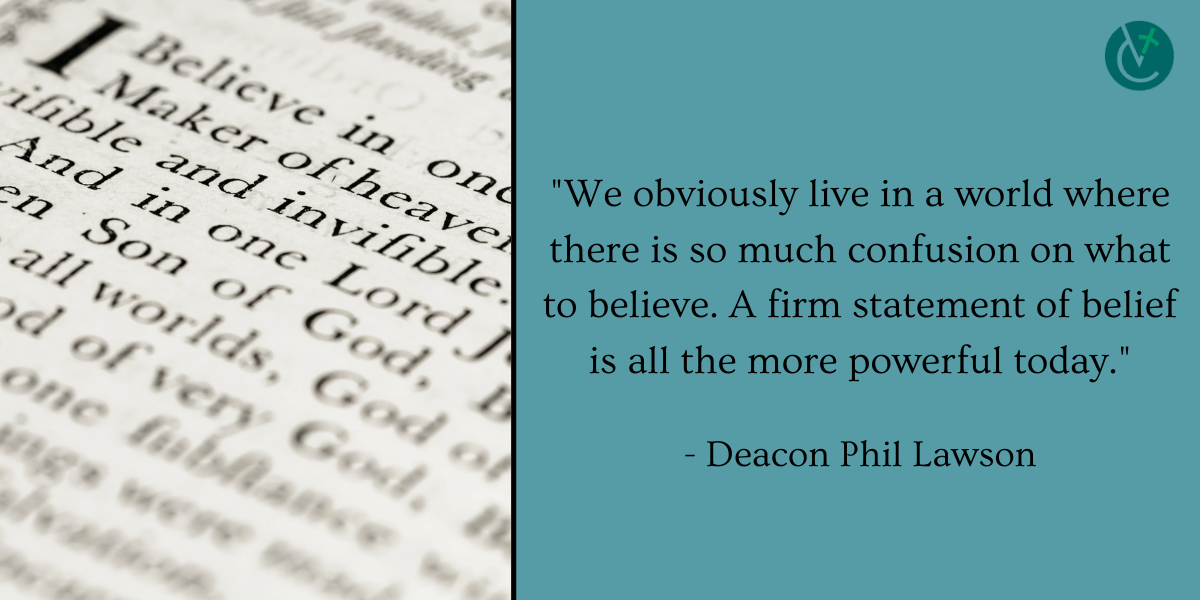 “I believe and profess all that the holy Catholic Church believes, teaches and proclaims to be revealed by God.”

This is the text said by someone who is coming into full communion with the Catholic Church as part of the formal Rite of Reception, often at the Easter Vigil. Having gone through a process of formation where the teachings of the Catholic Church are expounded on and explained, the candidate is invited to join this communion of faith; professing the same affirmation of the truths we hold and seek to live by. What a beautiful, firm and powerful statement of belief this is! It gives the Catholic life a firm foundation and orientation. And what a joy it is to help prepare someone to offer that statement of belief before God and the parish community.

We obviously live in a world where there is so much confusion on what to believe. A firm statement of belief is all the more powerful today. Where truths are viewed as relative, even changeable, and the ground underneath us seems to always be changing, placing our feet firmly in Christ and the Church He established is all the more striking a witness. We can take encouragement from the millions (billions?) who have gone before us professing and sometimes laying down their lives for these same truths.

As the Catechism of the Catholic Church notes in the section on the Creed: “Whoever says ‘I believe’ says ‘I pledge myself to what we believe.’” Through this profession of faith, they are brought into full communion with all of us in the Catholic Church, each of us living and holding the same beliefs.

Of course, The Creed to which we affirm “I believe” at each Sunday Mass contains the foundational truths we in the Church hold and seek to live our lives by.

Some of my favorite phone calls to receive at the diocesan center are the ones that involve someone desiring to become Catholic. I always ask them if they’d like to share a bit about what has lead them to this point. I have yet to have anyone turn down that invitation! It is then a privilege to hear the story of how the Lord has worked in that individual’s life, frequently through another Catholic whose life reflects the beliefs they hold. The next step is to direct them to a nearby parish where they can continue responding to the Lord’s invitation to come into communion with Him and His Church. It is during this next step that they dive deeper into all that the “holy Catholic Church believes, teaches and proclaims to be revealed by God.”  Those beliefs give structure to the life they are seeking to lead in Christ. Then at the appropriate time after continued prayer, discernment and intellectual engagement, they too can profess, “I believe” in these same truths; joining our Catholic communion.

The formal Rite of Reception continues as, after receiving the candidate’s Profession of Faith, the priest replies: “…the Lord receives you into the Catholic Church. His loving kindness has lead you here, so that in the unity of the Holy Spirit you may have full communion with us in the faith that you have professed in the presence of his family.”

May all of us, having responded to the Lord’s loving kindness, believing and professing all that we as Catholics hold to be true, continue to live lives guided by these truths — in full communion with our Lord and with one another.

—Deacon Phil Lawson is the executive director of pastoral ministries for the Diocese of Burlington. He can be reached at plawson@vermontcatholic.org.