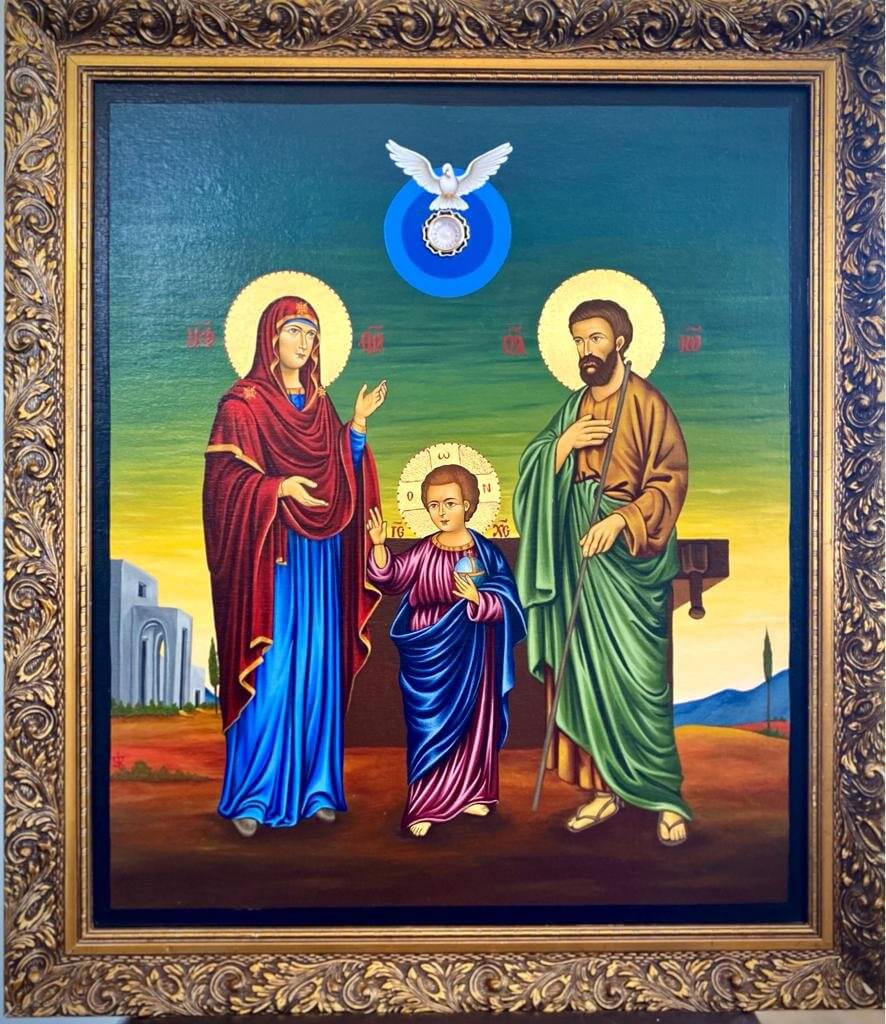 Photo Credit: CNS/Episcopal Committee of Justice and Peace of the Council of Catholic Patriarchs of the Middle East - The icon of the Holy Family of Divine Will of Unity and Peace inlaid with relics from the Basilica of the Annunciation in Nazareth.

‘Has anything good ever come from Nazareth?’

As a child, my parents gave me two very oversized, illustrated books of Scripture – one of Old Testaments stories and the other of New Testament stories. I loved those books and while their pages are worn and broken away from the binding, I still have them for my grandchildren to read.

The hand-painted, vibrant, illustrations were, no doubt, the reason I remember so many Bible happenings. My favorite was always the story of Shadrach, Meshach and Abednego walking in the fiery furnace with an angel of God behind them.

But it was probably a less exciting vignette that had greater impact on my faith and my life over the years. It was the image of two disciples, walking together toward Jesus. One disciple, Philip, tells another soon-to-be disciple, Nathanael, “We have found the one Moses wrote about in the Law, and about whom the prophets also wrote—Jesus of Nazareth, the son of Joseph.”

Nathanael scoffs, “Nazareth! Can anything good come from there?”

As a student still in CCD classes, my first thought was, “Oh, boy, he just put down Jesus. Sister Mary Catherine wouldn’t be happy about that!” Plus, I thought for sure he was going to be in big trouble with Jesus. I mean, you just don’t say that kind of stuff about the Son of God.

As I read on, I saw that Jesus was aware of Nathanael’s cynical, stereotyped comment but instead of being angry Jesus responded, “Here truly is an Israelite in whom there is no deceit.”

I was both confused and in awe of what transpired between the two of them, and probably got myself in to a few bits of trouble by following Nathanael’s outspoken example before I had grown enough to better understand the story.

There was more Scripture to read, more time needed for prayer, before I understood that Jesus didn’t just hear Nathanael’s words, he knew Nathanael’s heart. He knew Nathanael was a man looking for the truth, but Nathanael’s prejudice regarding Nazareth was clouding his vision. That would change.

The transformation happened when Nathanael finally encountered Jesus and asked, “How do you know me?” He was astounded at Jesus’ reply, “Before Philip called you, I saw you under the fig tree,” and declared Jesus the Son of God. This new and inspired disciple went on to evangelize and minister to Samaritans, Jews, Romans, Greeks and even those Pharisees who were willing to listen.

“How do you know me?” is a question I find myself asking God often, usually when I am running headlong down the wrong path until God shoves me on to the runaway ramp so I don’t crash and burn. Sometimes, like Nathanael, I overcome an obstacle and move forward as a disciple. At other times, it is not so easy to let go of what skews my judgment.

Prejudice and division, often dependent on each other, are obstacles, not only to Christian life but to the good of humanity. Often, they are thrust upon us; sometimes we participate in their creation and nurturing. It is important to be aware of our complicity.

To truly be disciples, anxious to live a life of trusting relationship with God, we must strive to let go of prejudice and, instead, strive for unity, not only for the Church but for the sake of all God’s children.

On the night before he died, Jesus prayed to his Father five times “that they may be one” as Jesus and his Father were one. Theologians may point out that Jesus was praying for his disciples, or for those who believed in Jesus, but I understood his prayer to cover all who were in the world then, and all who would come to be.

It makes sense to me because “oneness” is an act of love, and since God’s love knows no bounds, it is not up to us to set limits on it.