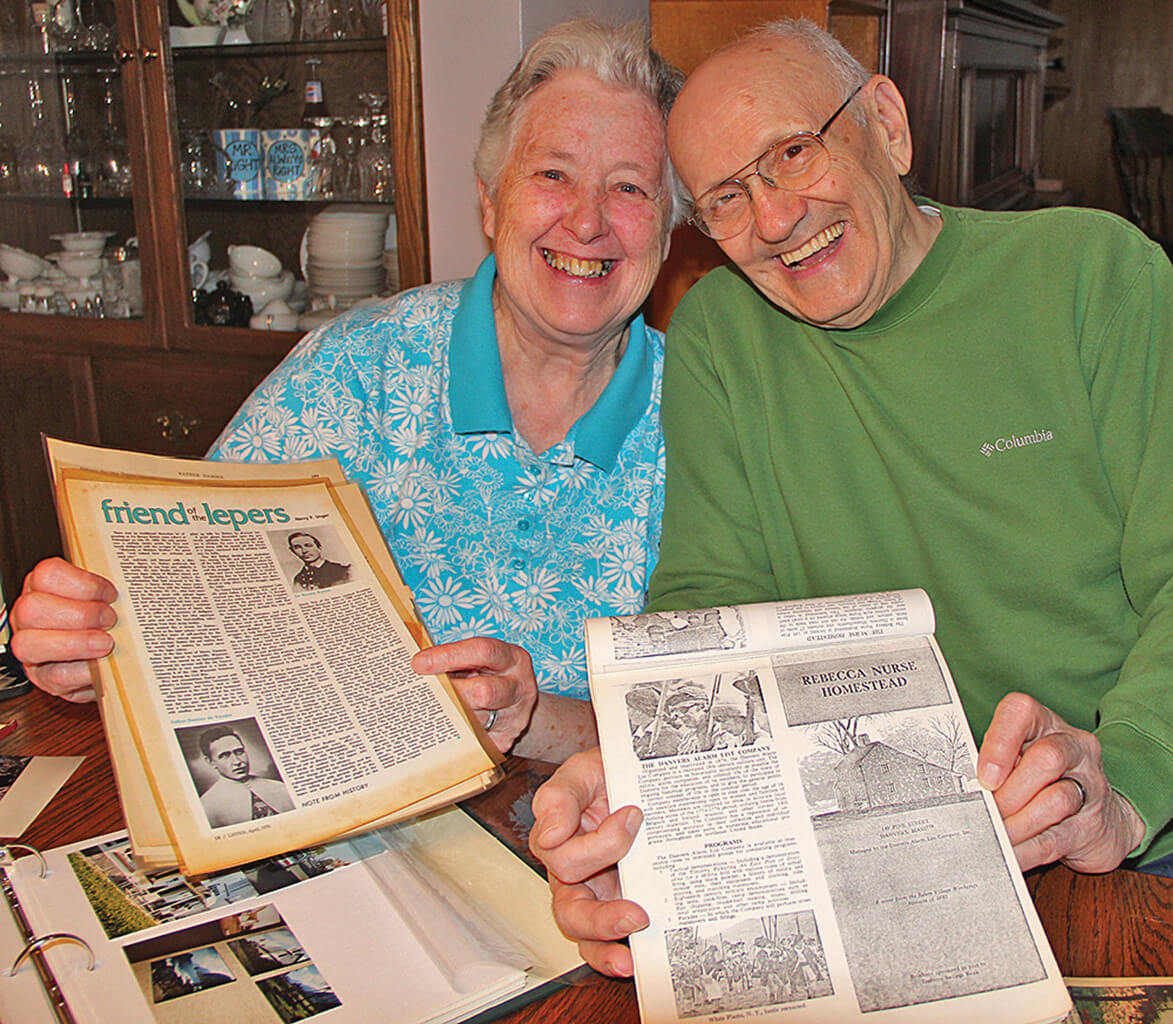 Photo Credit: CNS photo/Mary Solberg, Diocese of Erie - Pat and Jerry Nurss of Oil City, Pennsylvania, display some of the reams of documents and photographs about their family lineage.

“On the seventh day God rested. His grandchildren must have been out of town.” ~Gene Perret

As the weather grows warmer and we are able to spend more time on our backyard deck, it never fails to call to mind an image I have of my dad and one of my sons, a white-haired, blue-eyed handful of a child, perhaps four-years old at the time.

I looked out the glass of the sliding door in my dad’s kitchen to see them both, sitting in their respective lawn chairs on the patio, my dad with his customary “one can of beer on a hot summer day,” and my son with “one can of soda snuck out of the refrigerator by Poppy.”

They sat next to each other without speaking a word, looking over the newly mowed lawn and my father’s many flowers with the satisfaction of lords looking over their manor.

My dad was the kind of man who made even the simplest of moments memorable and rich, especially for his grandsons who treasured long walks with him and an endless collection of rocks, coins, pinecones and paraphernalia gathered as they journeyed.

They fought over who would be next to play checkers with Poppy, who would stand next to him in church and wait for the surprise moment when he would press their unsuspecting fingers against the pew and chuckle under his breath, or who would be on his team for croquet. But most of all, I think, they loved when he would crack their toes.

I wish my grandchildren could have known him.

There is no doubt in my mind. God created grandparents to teach the rest of us how to be stewards.

Grandparents are those people who always have the time, no matter how busy they really are. They just seem to know that the most important way to use their time is to give it away to someone else. For them, the recipients are their grandchildren.

Grandparents are those people who can do anything, fix anything, know everything, and if they don’t know, they will find out. In the eyes of their grandchildren they are among the most talented of God’s creatures.

Grandparents are those people who know, without a doubt, where their treasure lies — in the faces of little children covered with peanut butter and jelly, or the wily teenager who knows just the right thing to say to wrangle a few dollars from a generous soul.

When parents are busy with the practical, grandparents give the precious — sharing stories, telling jokes, buying ice cream, playing games and giving hugs.

There is no mountain grandparents wouldn’t move, no river they wouldn’t cross, no cartoon they wouldn’t watch if it would make life happier, healthier or better for the children who add reason to their being.

In our house, being a grandfather means taking time from real work plans and loading up the van with make-believe materials and driving to a make-believe job site while your young grandsons (aka bosses) give you your amazingly well-thought-out work instructions.

Being a grandmother means pulling the plug on my writing to take dictation from a five-year-old budding author who is writing her newest mini-book about the horrid, evil grandparents who move in to take care of two young sisters (“It’s only a story, ‘Abuela,’ it’s make believe,” she assures me) or making noodles — again — for my three-year-old epicure who loves just the right amount of butter and cheese.

Alex Haley, the American writer and author of the 1976 book “Roots: The Saga of an American Family,” said it beautifully: “Nobody can do for little children what grandparents do. Grandparents sort of sprinkle stardust over the lives of little children.”

Stardust that will, hopefully, shine in their memories for years to come and remind them of just how special they really are and how much they are cherished.

For there is no doubt in my mind that God made grandparents to teach us how to love.