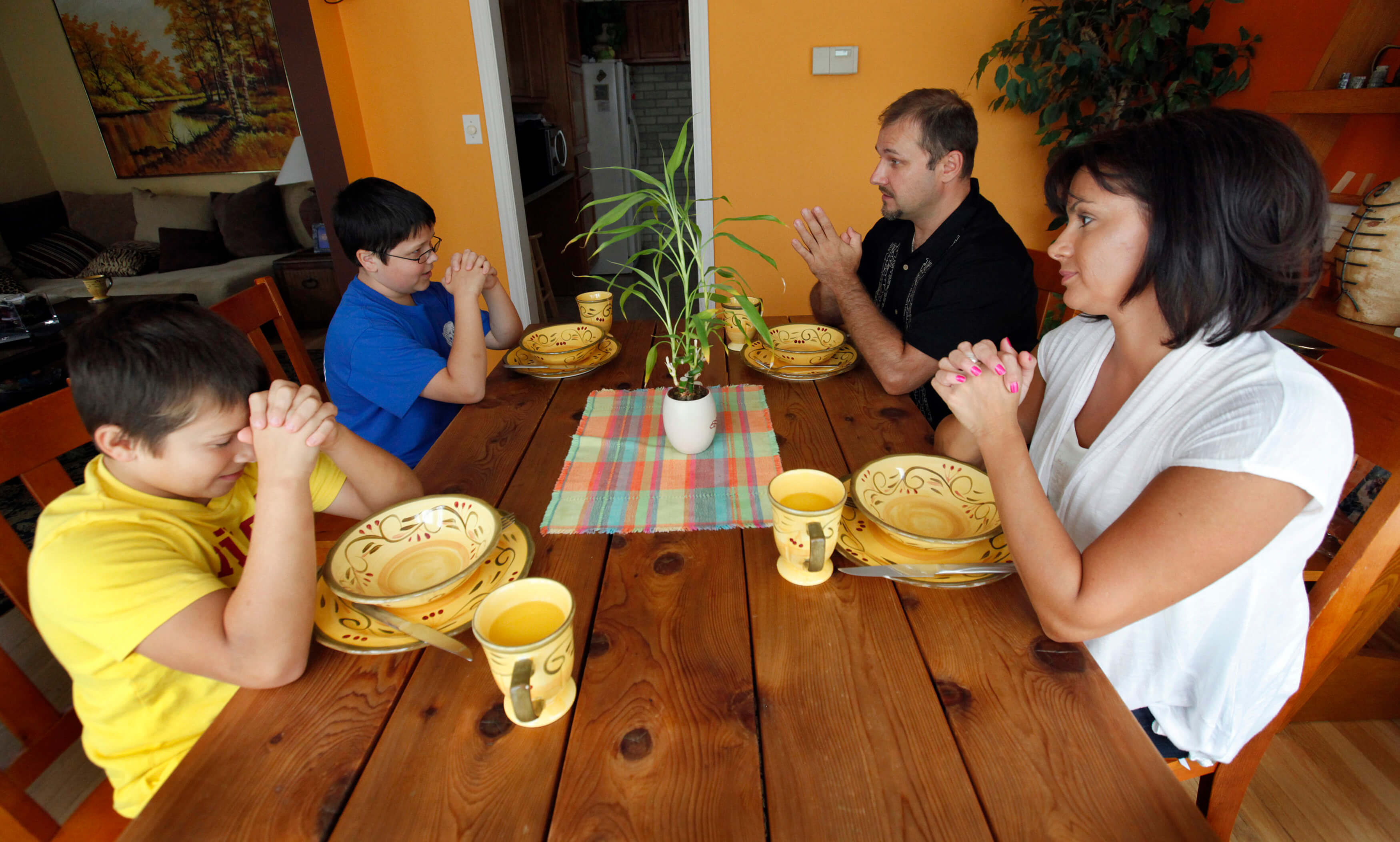 Photo Credit: CNS/Karen Callaway, Catholic New World - A family prays together before a meal at their Chicago home.

How many Catholic parents today encourage their young children to consider a vocation to the priesthood or religious life?

Sister Emily Beata Marsh’s parents did, giving her the freedom to be open to the possibility.

“It was just in the mix with everything, not given more importance than another path or way of life,” but presented as a “viable option,” the now 33-year-old told Catholic News Service.

Sister Marsh, a Daughter of St. Paul, traces the origins of her vocation to her family.

Over breakfast, her mother read aloud from a children’s book on the lives on the saints. “That was one way that I learned about what religious sisters were,” Sister Marsh explained, since there were no sisters where she lived in a small town southwest of Buffalo, New York.

“We weren’t one of those families that did the rosary every night,” she said. “My mom couldn’t get us to sit still that long. But more like an Our Father, Hail Mary, Glory Be, maybe a decade of the rosary, but always something.”

Praying as a family before bed made a big impact, Sister Marsh said. Without knowing exactly what prayer was as a little child, she knew that “it was important and something you were supposed to do as a family and individually.”

At a diocesan youth rally, Sister Marsh, then 13, met a Daughter of St. Paul. They stayed in touch and a few years later, Sister Marsh received an invitation to attend a live-in high school discernment program with the sisters.

“I had to miss a week of drivers ed,” she said, “but I absolutely loved it.”

The week taught her how to deepen her prayer life. Watching the sisters, she realized that prayer was a conversation, and she learned how to pray with Scripture.

Something else that struck her was the timeline in hearing the sisters’ discernment stories. She met sisters who had entered the community in high school or just after high school or midway through college.

“In my mind, being a sister had always been a post-college, post-career” path, Sister Marsh said. “There I realized, oh, God is asking me to think about this now.”

At the end of the week, she shared this revelation with a sister who told her, “It’s very beautiful to give your youth to Jesus.”

That phrase spoke to her throughout her discernment.

“More and more I came to feel God inviting me to give all of myself, that included my youth,” she said. “It also included — as I came to know more about myself — my weaknesses, limitations and struggles. God wanted all of that, all of that mattered to him.”

But a bit of time would pass before Sister Marsh would join the Daughters of St. Paul.

Following high school, she enrolled at St. Bonaventure University in New York, where she studied journalism and music. She kept in touch with the sisters and visited them on most breaks.

After her sophomore year, she attended a first profession of the sisters and “it just came flooding back,” Sister Marsh said.

“Witnessing that first profession made me remember what attracted me to religious life, that whole sense of laying down my whole life and giving my whole life to God,” she said, which is emphasized visually when the sisters physically lay down during the profession of vows.

In August 2007, instead of returning to college, Sister Marsh entered the community at age 20.

“I kept following that light of giving my whole self to Jesus. And the more time I spent with the Daughters, the more I felt myself realizing, I can do that here,” she said. “I felt that I could be myself with the sisters but also that I would become myself with this particular community.”

The order’s mission of evangelization with the media also appealed to her.

“Our mission is to reach all of humanity with all the means possible with the message of Gospel,” Sister Marsh said.

Sister Marsh made her final vows June 23, 2018, and is currently in Alexandria, Virginia, serving as vocations director for her order.

“Vocations call us to be a lot more receptive to what God is doing and how he is calling, no matter what your vocation is,” she said.

Vocations are a gift from God, Sister Marsh added.

“It’s never meant to be something that makes us miserable. And on the contrary, it’s the thing that has brought me the greatest joy,” she said, “and will continue to surprise me for the rest of my life.”