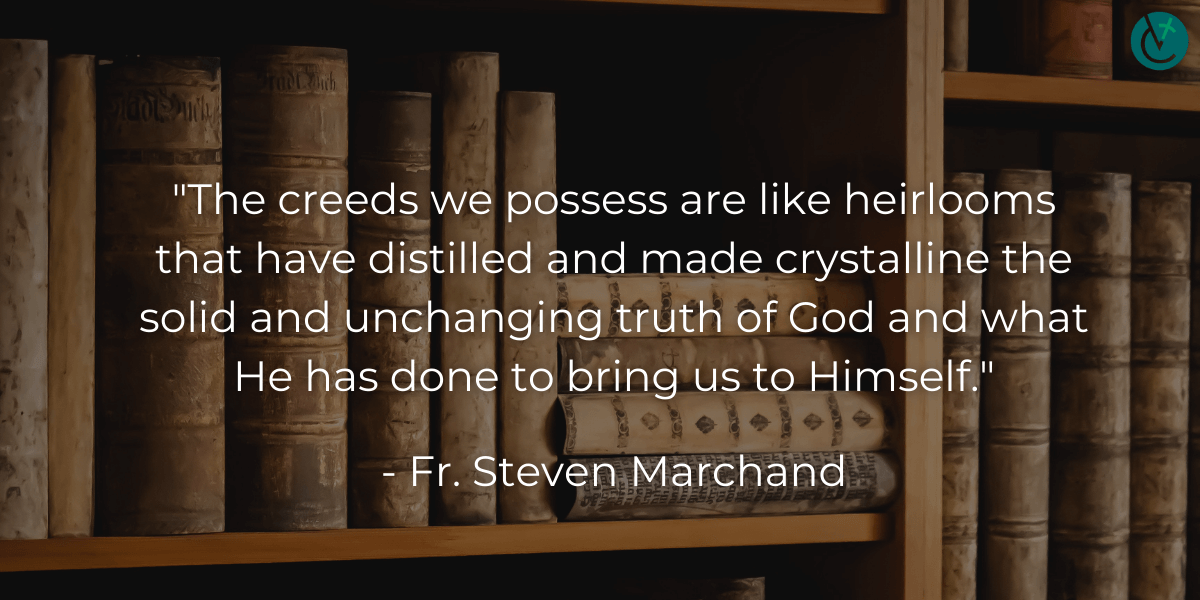 ‘Every word weighs a ton’

Calvin Coolidge was once asked why he spoke so infrequently, and when he did, so briefly. He had earned the moniker “Silent Cal.” In response, he said that “one of the first lessons a president has to learn is that every word he says weighs a ton.”

The same could be said for the creeds of our faith, those statements of the faith of the Church that we are proud to profess.

A creed very simply is a precise summary and formulation of the truths, or doctrines, of the faith received from Jesus Christ which are necessary to hold for salvation. We have three principle creeds: The Apostles’ Creed (the short one that accompanies the rosary), The Nicene Creed (the one used on a Sunday) and The Athanasian Creed (one much less used, but profound and beautiful nonetheless). That every word of the creeds has been debated, fought over, prayed with and safeguarded tells us how important they are.

Our own age is characterized by its philosophical materialism, which is a denial of the spiritual life, and a radical skepticism, which is severe doubt that we can actually know anything to be true. These two currents of thought have led to the de-humanizing tragedy that people no longer care whether they are philosophically or theologically right. The philosophy of “it’s all good” or “whatever floats your boat” and “you have your truth, I have mine” makes mincemeat of reality and any hope of unity. For in truth we are all created by God and find our identity in the saving words and deeds of the Word Incarnate, Jesus Christ. St. Augustine said that “our hearts are restless until they rest in thee,” and Aristotle reminded us that “all men, by nature, desire to know.”

Let us recall that conversion of mind, of believing true things, of having sure knowledge of God and His will, are central to the mission of Christ. Hear Christ’s words with Pontius Pilate: “Pilate said to him, ‘So you are a king?’ Jesus answered, ‘You say that I am a king. For this I was born, and for this I have come into the world, to bear witness to the truth. Everyone who is of the truth hears my voice.’ Pilate said to him, ‘What is truth?’” (Jn 18:37-38).

We are not only physical beings with material appetites. We are spiritual beings wedded to a physical body. We have souls to be saved! God did not make us to be unknowing like the animals. Allowing our minds to be flooded with divine truth, to hold certain things in our mind to be true and others false is part of the act of faith. The most fundamental truth is this: “For God so loved the world that he gave us His only Son, that whoever believes in Him should not perish but have eternal life” (Jn 3:16). Author G.K. Chesterton said in his 1905 book “Heretics” that the most terrible position we can be in is ignorance of our own creed. A reluctance to hold a creed simply will not do. It is against human nature. A reluctance to hold a creed will mean simply an acceptance of someone else’s.

We Catholics, baptized and made members of the mystical body of Christ, are humble recipients of the fullness of truth as revealed by God in His son Jesus Christ. The creeds we possess are like heirlooms that have distilled and made crystalline the solid and unchanging truth of God and what He has done to bring us to Himself.

So, the next time you are at Sunday Mass, let your mind and heart close tightly around those sacred words, “I believe… .” Martyrs have died for those words, make them a prayer — each word weighs a ton. Be “transformed by the renewal of your mind, that you may prove what is the will of God, what is good and acceptable and perfect” (Rom 12:2).