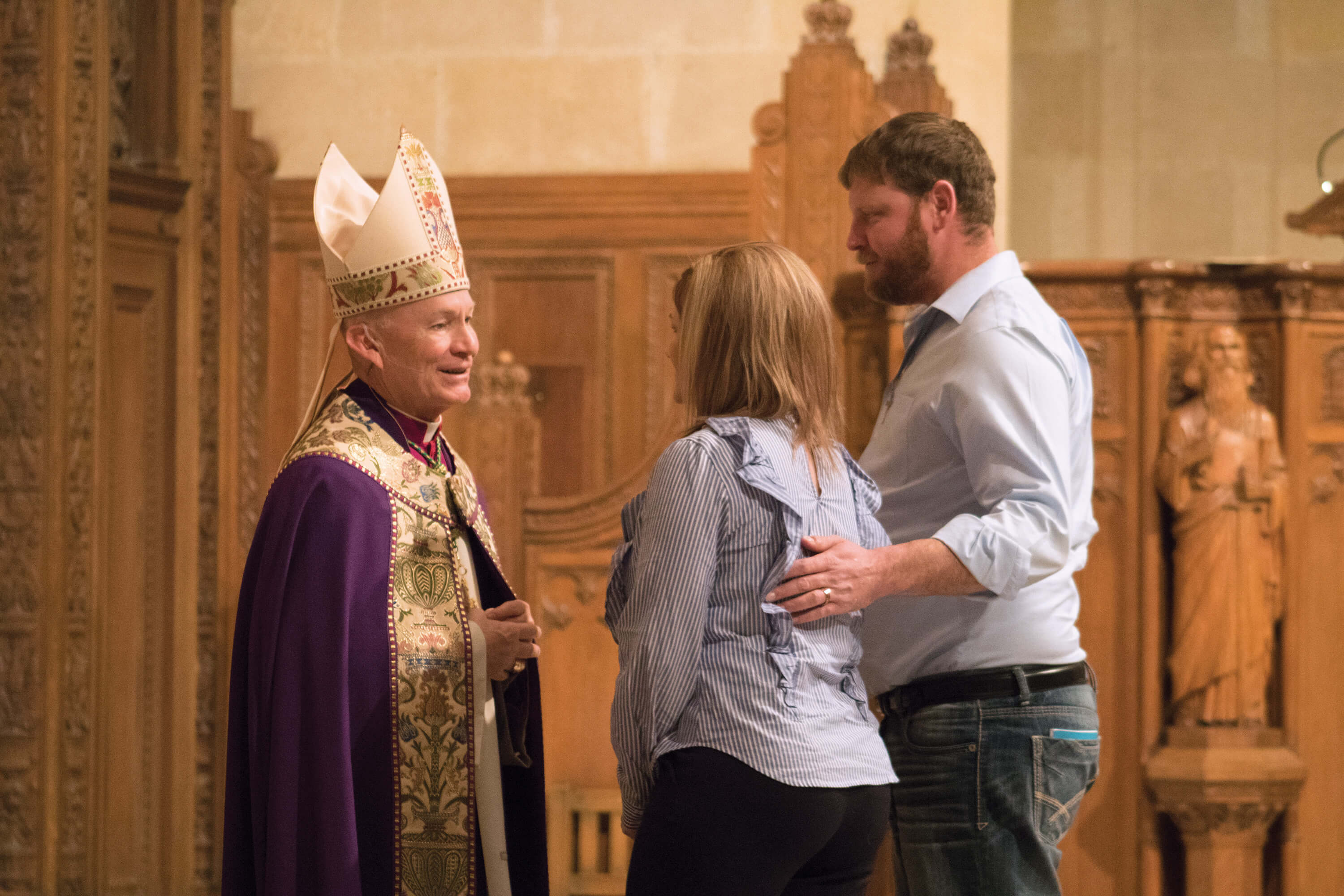 Photo Credit: CNS/Joe Ruff, Catholic Voice - Archbishop George Lucas of Omaha, Neb., greets Chelsie and Jeremy Promes of St. Boniface Parish in Menominee at the Rite of Election last year at St. Cecilia Cathedral in Omaha. Through the Rite of Christian Initiation of Adults, Chelsie journeyed toward confirmation and First Communion at the Easter Vigil.

I recently came across an old bulletin cover featuring the Rite of Christian Initiation of Adults participants from St. Mary Cathedral in Michigan where I served as the pastoral associate. The photo was taken after the Easter Vigil. Their faces radiate joy. Every one of those men, women and young people were there because someone had pointed them toward Jesus Christ and His Church. In other words, someone, whether they realized it or not, had discipled them. Someone had taken the time to model for them what life as a disciple of Jesus Christ in the Catholic Church looks like. Everything from when to kneel and stand at Mass, to how to pray the rosary, to why we don’t eat meat on Fridays during Lent, to what a life of personal and daily prayer looks like. I cherished my time with them as I had the privilege of deepening that life of discipleship catechetically and spiritually through the formal RCIA Program.

Whenever I ask people becoming Catholic why they are taking this step, they give one of the same two answers. They either respond that they’ve found it to be true, or they point to a person. And ideally, they offer both answers! We have a faith that is 2,000 years old that we know to be true, established by Jesus Christ. And yet, it is people that the Lord uses to communicate the Good News and model what this life of discipleship in Christ looks like so that ultimately each person can bring Christ and the Good News to the people in their lives. We all know the phrase, “You can’t give something you don’t have.” It is perhaps even truer in the realm of faith. We must be disciples, and only then can we hope to disciple others so they, in turn, can do the same.

We see countless examples of this in both the Scriptures and in the saints. The great prophet Elijah taught, mentored and walked with Elisha, to whom he would then pass his blessing and mission. The apostolic era bishops Timothy and Titus were both discipled by St. Paul as we see in his letters to them in the Bible. St. Augustine eventually converted under the tutelage of St. Ambrose. The holy Jesuit, St. Aloysius Gonzaga, who would give his life serving the poor and those dying of the plague in 1591 Italy, was discipled by St. Robert Bellarmine. Saints produce saints. Disciples produce disciples.

When I think of my own life, I can say that I am a disciple of Jesus Christ because of God’s grace and the people He has brought into my life through the years. I think of my mother whose steadfast faith sustained her and our family through many storms and challenges. I think of Jeremy, a fellow college undergraduate, whose confident and intellectually rich understanding of Jesus Christ and His Church was an inspiring example to me as a young man. I think of Professor Crawford whose life of faith and search for truth guided me back into the Catholic faith. I think of Margaret who lived her Catholic faith with a deep joy. I could go on and on, recalling the people who helped lead me to a life of discipleship.

When the apostles asked Our Lord how to pray, He taught them the “Our Father.” Notice how Jesus phrases it: “Our Father,” not “my Father,” but “Our Father.” Pope Francis likes to speak on this idea of accompaniment — how we accompany one another as brothers and sisters in Christ toward Our Father, in other words discipleship. Jesus calls us to be disciples with and for others so they in turn will accompany and disciple others to the Lord.

Elijah discipled Elisha. St. Paul discipled Sts. Timothy and Titus, St. Robert Bellarmine discipled St. Aloysius Gonzaga. The amazing men and women at St. Mary Cathedral were each discipled by others who lead them to the fullness of faith in Jesus Christ and life in His Catholic Church. And in turn, each of them were called to go on and disciple others.

Who are the disciples who have accompanied and formed you? And who are you and I, as disciples, being called to joyfully disciple on our journey through this life to Our Father?

—Deacon Phil Lawson is the executive director of evangelization, catechesis, divine worship, marriage and family and respect life for the Diocese of Burlington. He can be reached at plawson@vermontcatholic.org.