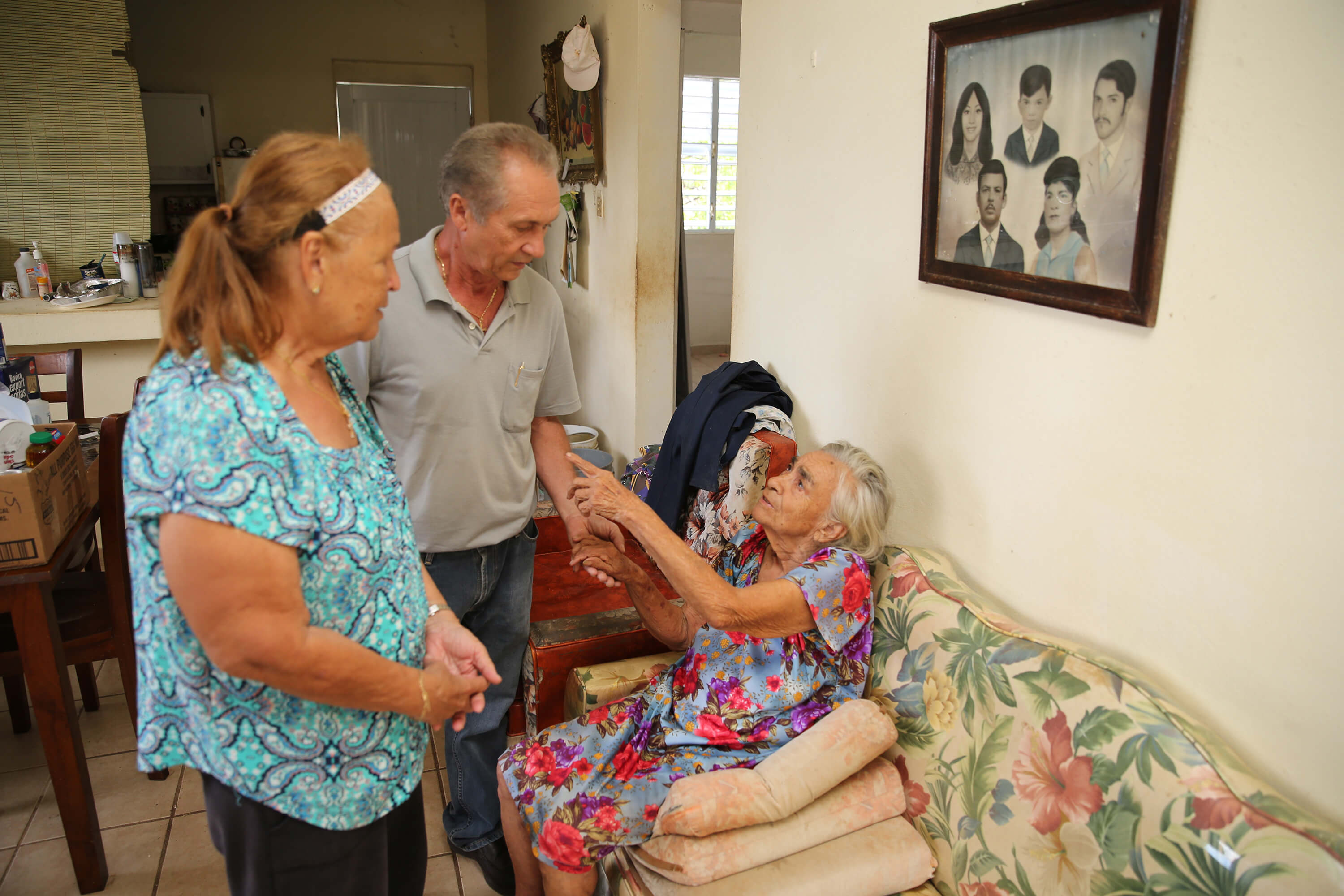 Photo Credit: CNS/Bob Roller - Parishioners of Immaculate Heart of Mary Church in Las Marias, Puerto Rico, greet Luz Lamboy, 82, at her home in 2017. Lamboy has Alzheimer's and lived alone in a poor area outside the town.

Wes is a capable professional frustrated by his mother’s progressive cognitive impairment, believed to be due to late stages of Alzheimer’s disease. Wes said that his mother no longer recognized him. At that point she spoke very little. He lamented, “But that’s not my Mom!”

Liz was in her late seventies seeking help in getting her husband’s doctors to cut off his medications for diabetes, high blood pressure and thyroid problems. Her husband was in a nursing home with a diagnosis of advanced Alzheimer’s. He did not recognize her. “That is not my husband,” she said. She wanted to “let nature take it course” because her husband’s care was being paid for from their family resources; he was not eligible for Medicaid. When I pointed out, as the doctor had already, that her plan might leave her husband in worse shape than he was at the time of her request, she became angry and animated. She shouted: “Look! I want him dead.” I explained that I could not cooperate with that plan for legal and moral reasons.

Contrast the attitudes shown in those scenarios to the insights expressed in the following two scenarios.

Father X routinely goes to the nursing homes to administer the Sacrament of the Sick to all Catholic patients at stipulated intervals not knowing how soon any might die. He reported that he recently administered the sacrament to an elderly woman who was described by nurses as “really failing and not speaking for some weeks” due to progressive cognitive impairment. Father began the rite for the sacrament and had no response from the patient. But when he began praying the Our Father as part of the rite, the woman spontaneously prayed it along with him without missing a word. He remarked, “Even in that stage of the disease, there is still something there. You never know when or how it will come out.”

Frank was contacted by a hospital in a distant city. His mother was admitted with a broken hip. She also suffered from Alzheimer’s disease. She was elderly and confused. She had pulled out an IV and was not eating or drinking on her own. When he arrived at the hospital he was asked to sign off on a DNR/DNI request and a form indicating that his mother would not be given nutrition or hydration and heavily medicated until she died. Frank refused to sign. He calmly responded that his mother would be given nutrition and hydration and sufficient medication to manage her pain, but not so much as to hasten death. He wanted her built up and prepared for surgery. If that could not be begun within an hour, he wanted her transferred to a specific Catholic hospital.

Frank got some pushback from the physician and nurses; he held his ground. For several days Frank spoon fed his mother. A couple of weeks later, she was sitting up in bed and praying the rosary with him. He described holding a conversation with her, admittedly not on the same level as she might have communicated a few years earlier. He said to me, “She’s still my Mom.”

The above names have been changed out of respect for privacy.

As Catholics, we believe in the inherent dignity of each person. In this Year of the Family, let’s reflect on these thoughts. Many of us will have to confront these and similar issues as our loved ones age. Let us pray for the grace to always see our loved ones despite whatever disease they have.

Deacon Pete Gummere is director of the Permanent Diaconate; he is a bioethicist and adjunct faculty at Pontifical College Josephinum and theology instructor at St. Therese Digital Academy. He serves at Corpus Christi Parish based in St. Johnsbury.

—Published in the Winter 2018 issue of Vermont Catholic magazine.