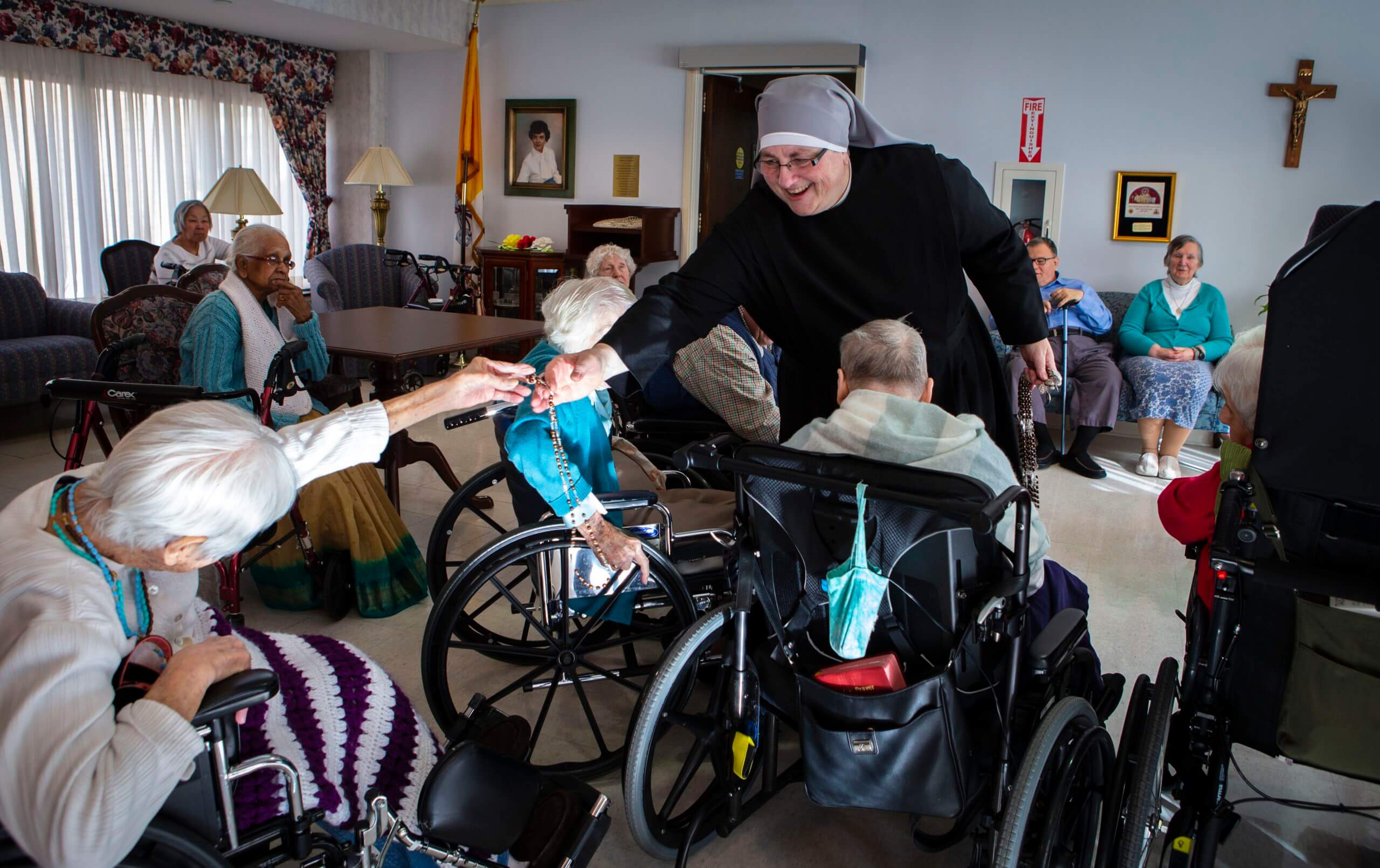 Photo Credit: CNS/Chaz Muth - Sister Constance Veit is director of communications for the Little Sisters of the Poor.

Aging and a season of fruitfulness

With the Supreme Court’s overturning of Roe v Wade, June 24 will no doubt be remembered as an historic day by pro-life advocates the world over. I have to admit that my thoughts were elsewhere that day – focused on life’s last stage – as my family bid farewell to a beloved uncle, our family patriarch.

As I tried to catch up on the news the day after his funeral, a column written by Kathryn Jean Lopez of the National Review Institute, a good friend, caught my eye.

Opining on what she believes to be abortion’s most detrimental effects on our society, Lopez wrote, “We are violent; we do not look at human beings as unique creations made with purpose and plan.”

These sad words stood in stark contrast to my uncle’s farewell celebration the day before. My uncle lived every stage of his life to the full for nearly 92 years. Though no one would have proposed him as a role model of healthy aging in terms of diet and exercise, his life was rich in relationships, purpose and faith until the very end.

An orthodontist for more thasn 40 years, my uncle was remembered by former patients and their parents as kind, patient and genuinely interested in the young people he served. He was involved in numerous professional organizations, local causes and educational institutions, volunteered as an extraordinary minister of Holy Communion at a local hospital well into his eighties and attended daily Mass until Covid-19 closed his parish doors in 2020.

Despite all of his accomplishments, what struck me most about my uncle was his generous spirit, upbeat demeanor and unselfish love for his family and friends. Nothing gave him greater pleasure than being surrounded by his children and grandchildren, yet his interest in others reached well beyond his family.

He was known to quietly assist people who could not afford dental care to obtain it from his friends, and he enjoyed mentoring young people in the pursuit of their dreams.

Although he never mastered the use of a computer, my uncle maintained ties with everyone he loved via telephone, especially during the pandemic.

He was also an avid reader and consumer of local and national news and tried his best to keep his wife grounded in reality despite her advancing dementia.

In his message for this year’s celebration of the World Day of Grandparents and the Elderly, Pope Francis wrote that the ebbing of one’s strength and the onset of illness in old age, together with the fast pace of the world, can lead seniors to implicitly accept the idea that they are useless. My uncle never succumbed to this temptation.

Pope Francis encourages seniors to remain active in their later years, especially from a spiritual standpoint. “We ought to cultivate our interior life through the assiduous reading of the word of God, daily prayer, reception of the sacraments and participation in the liturgy,” he wrote.

“In addition to our relationship with God, we should also cultivate our relationships with others: first of all by showing affectionate concern for our families, our children and grandchildren, but also for the poor and those who suffer, by drawing near to them with practical assistance and our prayers. These things will help us not to feel like mere bystanders, sitting on our porches or looking out from our windows, as life goes on all around us. Instead, we should learn to discern everywhere the presence of the Lord. Like ‘green olive trees in the house of God’ (Ps 52:10), we can become a blessing for those who live next to us.”

He wrote, “The special sensibility that those of us who are elderly have for the concerns, thoughts and the affections that make us human should once again become the vocation of many. It would be a sign of our love for the younger generations. This would be our own contribution to the revolution of tenderness, in which I encourage you, dear grandparents and elderly persons, to take an active role.”

My uncle never stopped bearing fruit; he was a blessing to all those who knew him.

As I thank God for his life and love, I look forward with joy to the World Day of Grandparents and the Elderly on July 24.

I hope you too will celebrate this special day by opening your eyes and hearts to the seniors in your midst who are still bearing fruit for the Kingdom and who are eager to become a blessing for you.

—Sister Constance Veit is the communications director for the Little Sisters of the Poor in the United States and an occupational therapist.