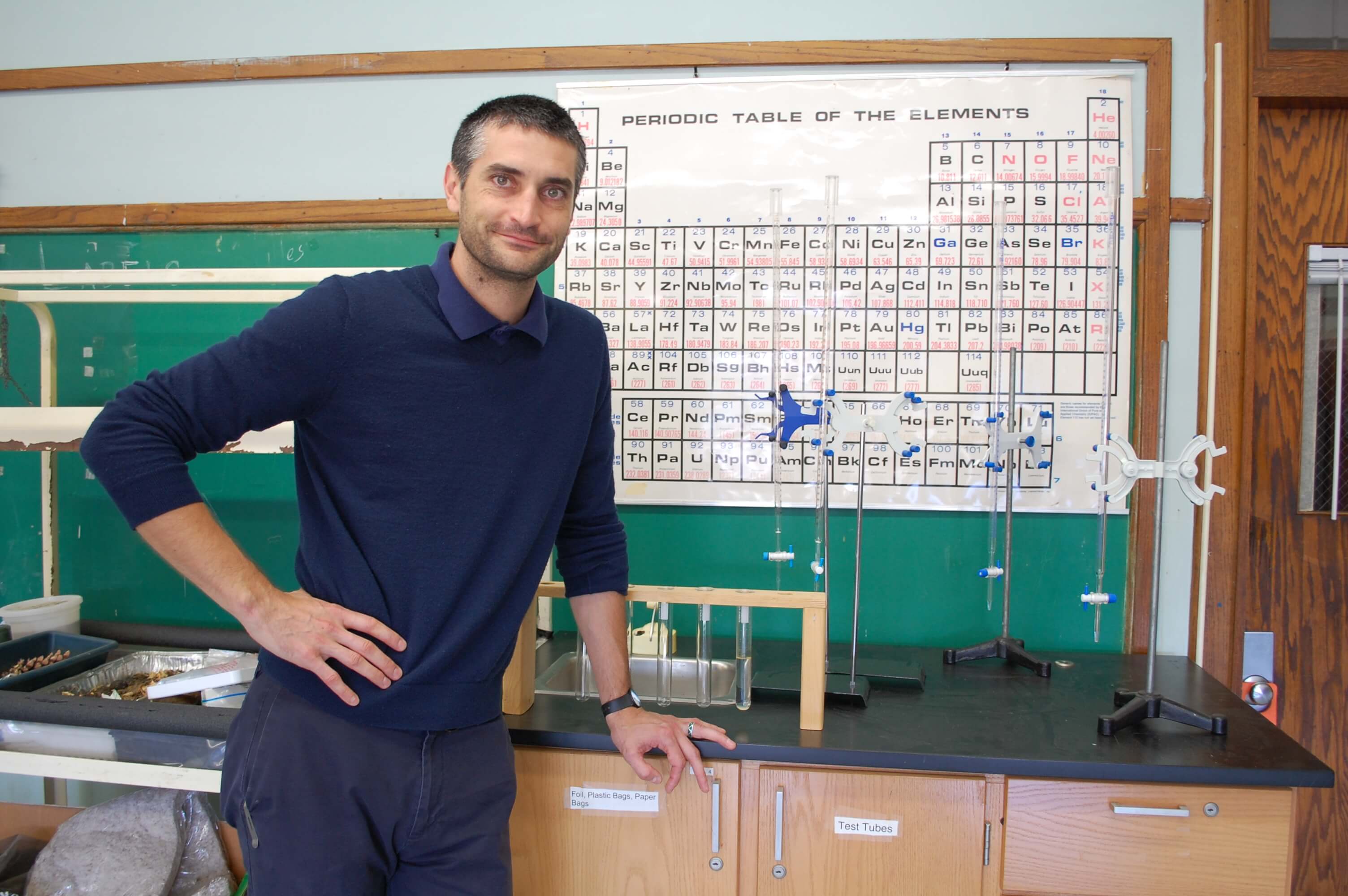 Photo Credit: Vermont Catholic/Cori Fugere Urban - Joshua Patriquin stands in his science classroom at St. Michael School in Brattleboro. He has been named Vermont Middle School Teacher of the Year.

Vermont Middle School Teacher of the Year is from St. Michael School in Brattleboro

A 36-year-old teacher at St. Michael School in Brattleboro has been named Vermont Middle School Teacher of the Year.

His reaction to the award was typically scientific: “You measure success with a lot of different outputs,” he said. “Are the students learning? Are they having fun? Are they talking about [what they are learning] at home?”

The award was an unexpected output.

Patriquin was surprised with the teaching award, especially since he has been teaching middle school for only a half dozen years. (He taught English for two years at Quinsigamond Community College in Worcester, Massachusetts, for two years.) “I think of my work as an experiment. It’s never done. I’m always asking questions,” he said. “If I were in my fifties or sixties I would not be as surprised. I would have had years and years to tweak the experiment.”

Michael Kelliher, a junior at St. Michael’s High School, said Patriquin brings to the classroom “his charisma and a comedic presence.” He said is blessed to be a student at the Catholic school, and he hopes Patriquin continues to teach there for many years “so that others can experience his teaching style and sense of humor.”

Eighth grader John Paul Delabruere said the teacher “has a way to make class interesting and educational even if you don’t like the subject.”

Students like Patriquin’s interactive approach and some of the more unusual lessons like freezing and dissecting a fish to find its cause of death.

St. Michael’s Principal Elaine Beam said Patriquin is notorious for his love of science and his ability to make science “real” for his students. “Science does not just happen in his classroom or the science lab,” she said, explaining that his lessons extend to local fields, a working farm, the Connecticut and West rivers and the local business community. His students have visited and worked with Omega Optical where lenses are produced for the Hubble Telescope and lasers are made for cancer research.

“He is well connected to our Southern Vermont community and utilizes its resources so that his students don’t just read about surveying equipment when calculating velocity, they actually use an electronic surveying laser borrowed from an architect, or they create an instrument that can accomplish the same task,” she said.

A member of St. Michael Parish in Brattleboro who converted to the Catholic faith in 2015, Patriquin’s teaching encompasses more than passing on book information and requiring memorization of facts. Compassion is paramount, and he encourages his students to ask questions and see that science is everywhere. He wants them to have fun and learn from their mistakes, and he acknowledges he doesn’t have all the answers. He explores with his students.

“His students will tell you he is passionate about math, science and going to Mass, and they will also tell you he knows each of them as individuals.” Beam said. “As the principal, I am blessed to work with, and learn from, such a gifted teacher.”

Known as “Mr. P,” Patriquin doesn’t just talk at students, he is interested in what they think and tries to help them evolve in how they think.  He uses books, online resources and excerpts from various works. “I refuse to use [just] one textbook; that is pigeonholing,” he said.

One of his grandfathers was an engineer; the other was a calculus professor. His father is a retired teacher with a degree in zoology, and his mother is a full-time lab technician. “I’ve always been around science and loved it,” he said.

In fact, the Petersham, Massachusetts, native grew up in a household where there were often experiments at the kitchen table with his father like finding the melting points for different plastics, making flames of different colors using different combustible materials or measuring the oxygen output of different plants. (He earned a University of Massachusetts Science Fair first place in seventh grade for the plant experiment.)

Sometimes he visited the lab where his mother works and observed how x-rays were processed and how different equipment worked.

One of his brothers was into holography and computers, the other into structures, art and audio engineering. “We were a family that enjoyed science in general,” Patriquin said.

A graduate of George Washington University with a bachelor’s degree in English, he did some coursework in plastics engineering.

Married to Timberly Hund, he is the father of one son, George, 3. His hobby is developing math education software.

Dr. Gary Carver of Omega Optical in Brattleboro nominated Patriquin for the teaching award, which he will receive Sept. 23 in Middlebury at the Vermont Academy of Science and Engineering conference.

We would consider it a remarkable achievement in the 21st century if any one person could [...]