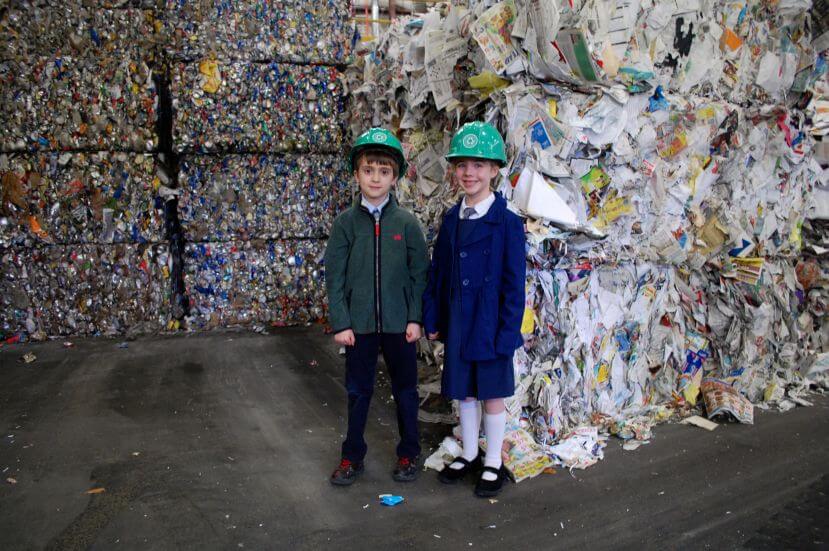 Nineteen kindergarten and first-grade students from St. Michael’s School in Brattleboro donned green construction hats as they learned a lesson in the three R’s – not reading, ‘riting and ‘rithmatic – but reducing, reusing and recycling.

During an April 12 visit to the Windham Solid Waste Management District in Brattleboro they saw how recycled materials are sorted and bundled for sale and how compost is made.

It was part of the school’s observance of the Diocese of Burlington’s Year of Creation, and the children understood the importance of caring for what Pope Francis calls “our common home,” the Earth.

“Not reducing, reusing and recycling is bad for the Earth,” said Jackson Ferreira, 7, a first grader.

“The Earth is our home, and we should respect it because God gave it to us,” added classmate Kalyn Curtiss, 7.

Before taking a tour of the facility, the children and their chaperones listened to a presentation by Kristen Benoit, program coordinator for the management district. “Everyone makes trash, but we can make the trash smaller by making smarter decisions,” she said.

Benoit said every Vermonter produces about four and a half pounds of trash a day; that equals 1,640 soccer balls per year per person. “Our job here is to help make it less,” she commented.

Seventy-five percent of all trash is recyclable; recycling 2,000 pounds of paper saves 17 trees, 7,000 gallons of water and 380 barrels of oil, she noted.

As for compost, Benoit said 30 percent of household trash is generally food and yard waste – items that could be composted “to make really good dirt for your plants.”

Putting food into landfills is not only unnecessary, it creates harmful methane gas.

Liz Martin, the kindergarten and first-grade teacher at St. Michael’s School, said during Lent the children made a special “sacrifice” to take better care of the Earth God has given them. “We’re going to try to do that for the entire year, not just Lent,” she added.