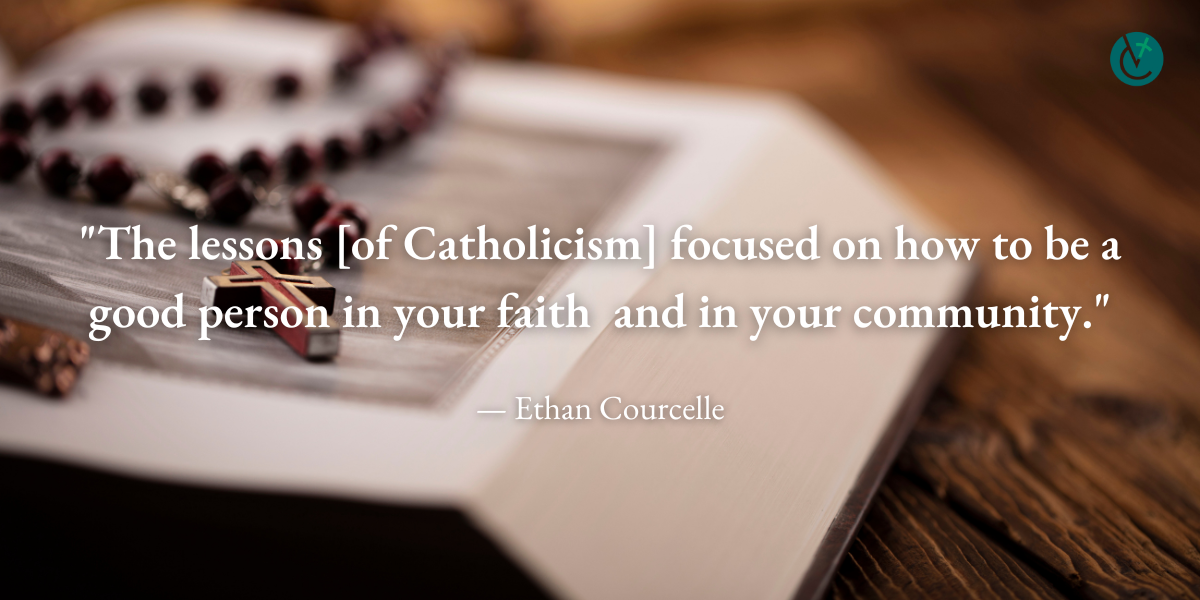 When Ethan Courcelle worked as a dietary aid at St. Joseph/Kervick and Loretto homes in Rutland during the height of the Covid-19 pandemic, he especially enjoyed delivering meals to residents and speaking with them, even if briefly. (He was masked and gowned.)

“Sometimes my co-workers hurried me along,” laughed the affable 2022 graduate of Mount St. Joseph Academy, a Catholic high school that neighbors both the eldercare homes that are run by Vermont Catholic Charities Inc. “It was good to spend time with [the residents whose contact with others was restricted because of the pandemic] and converse a little. They wanted to talk to someone. It was about being there to listen.”

It was that positive experience with elders and his love for them that lead to Courcelle’s goal of becoming a geriatric psychiatrist; he will be attending The College of the Holy Cross in Worcester, Massachusetts, this fall to study psychology.

It was his own authentic faith, spirit of positivity and respect, true appreciation for the school community, commitment to serving others through acts of kindness and generosity and reflection of the academy’s mission of making a more just world possible that earned him MSJ’s 2022 Veritas et Puritas (Truth and Purity) Award.

“It was very heartwarming to know my efforts were shining through enough for recognition,” said Courcelle, who during his four years at MSJ was National Art Honor Society president, a member of the National Honor Society, a Student Ambassador for prospective students, a theater program participant, a choir member and a member of the soccer and tennis teams.

The curly-haired, blue-eyed son of Annie and James Courcelle graduated from Christ the King School in Rutland and has been an altar server at Christ the King Church. He swims with the Rutland City swim team and has swum in state meets for about 10 years. He has danced in the Nutcracker at The Paramount Theater in Rutland three times.

Among the benefits of his Catholic education, Courcelle counts the nurturing of his faith. “The lessons focused on how to be a good person in your faith and in your community,” he said.

He also liked the small class sizes, which, he said, helped him focus on academics. Plus, “everyone is friends with everyone.”

When he was younger, he attended Mass because his parents and five siblings did. “Over the years, I realized its value,” the 18-year-old said. “It’s a time to connect with God and members of the community who share that faith.”

One of Courcelle’s role models in the faith is his grandmother, Diane Courcelle of Rutland, his confirmation sponsor who, he said, lives her faith. He smiled as he recalled times when he served the Saturday afternoon Mass his grandparents attended. “Sometimes they brought me to Mass … and out to eat after,” just the three of them. “It was a perk of altar serving.”