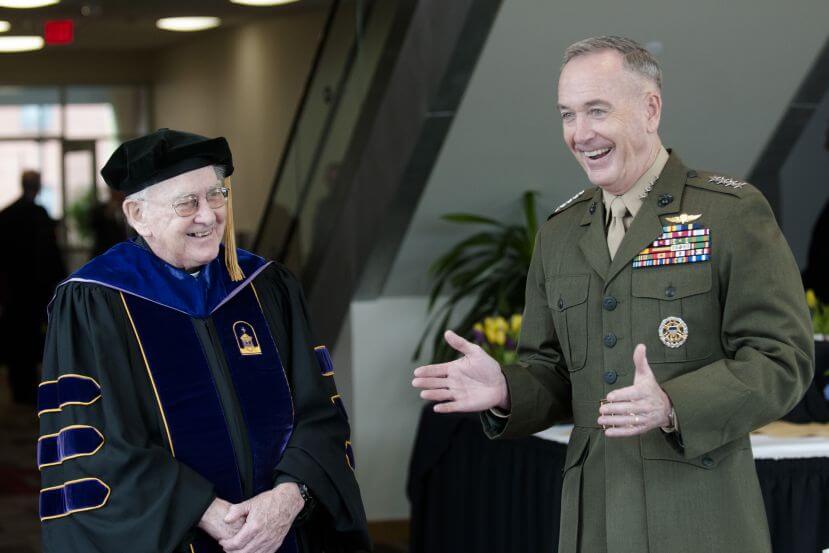 St. Michael’s College in Colchester marked its 110th commencement on May 14 in the Ross Sports Center; it included 456 undergraduates and 30 graduate degree recipients.

“It’s never about you,” said Gen. Joseph Dunford ’77, chairman of the U.S. Joint Chiefs of Staff, who told the St. Michael’s College Class of 2017 that moral courage and a commitment to serving others are essential qualities for “leaders of consequence.”

The nation’s highest-ranking military figure, Dunford told graduates that being a leader means doing the right thing even when it’s unpopular, and that “the greatest call is to serve.”

“What I’ve learned in 40 years is that extraordinary leaders are actually ordinary men and women who make a commitment to excellence” and dig down deep, he said, adding that the world will need the new graduates’ leadership given that “from a security perspective alone, the challenges we face are as complex as any we’ve faced since World War II,” while the pace of change is unprecedented. As St. Michael’s graduates, he told the class, “you are uniquely equipped” to meet those challenges.

Dunford called upon the graduates to “go forth to be leaders of consequence.”

At the College of St. Joseph, former Vermont Gov. Jim Douglas spoke of some of Vermont’s greatest challenges and how graduates can help to confront them, including the state’s declining population and its effects.

“So, here’s my pitch: We need each of you to be a part of our state’s future. We need you to live and work here, to make Vermont your home,” Douglas said. “To use your education to find meaningful work and perhaps create additional jobs. We need you to raise your families here and to contribute to your community and state.”

Douglas, the commencement speaker, also discussed his views on the decline of civil discourse and how graduates can best use their voices in discussions with others whose opinions with which they may not agree.

“I urge each of you to listen to different voices, to respect others when they speak and to weigh objectively the arguments they put forth. You may not be persuaded. You may become more confident in your own views,” Douglas said. “But, in a democracy, we can’t delegitimize the thoughts of others. We must allow them to be expressed. As many have said through the years, the remedy for speech you don’t like is more speech.”