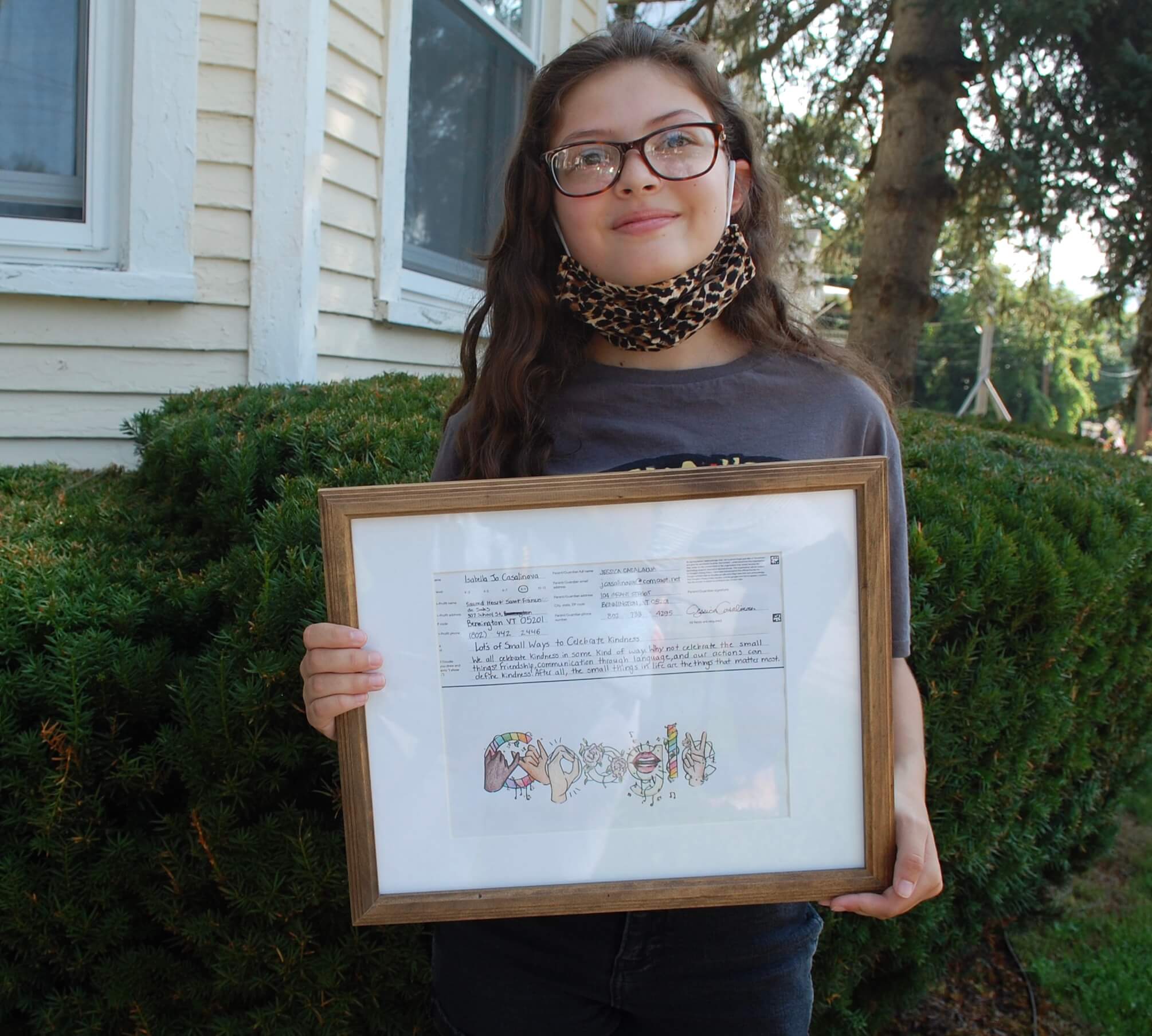 Isabella Casalinova, 14, a 2020 graduate of The School of Sacred Heart St. Francis de Sales in Bennington and freshman at Mount Anthony Union High School there, is the Doodle for Google 2020 Vermont state finalist.

She is one of the 54 state and territory winners throughout the country; her doodle was selected from thousands of entries.

The 12th annual Doodle for Google competition, a contest open to K-12 students to design a Google Doodle, featured the theme “I show kindness by…”.

“I didn’t think I’d get picked,” Isabella said as she and supporters waited outside her Bennington home Aug. 11 for the Google prizes to be delivered. “I was shocked.”

Her prizes were delivered in special Google box and included a tablet, a T-shirt with her winning design printed on the front, a balloon bouquet and other gifts.

The daughter of Jessica and Michael Casalinova, has a younger brother, Cameron, a student at The School of Sacred Heart St. Francis de Sales.

“The arts play an important role in any school’s curriculum,” said Principal David Estes. “They give students the chance to experience themselves in different ways and enhance their creativity. Bella is very creative in many ways.”

Her father said he is “super proud” of Isabella — who would like to be an animator someday — but acknowledged “she gets all her creativity from my wife.”

Jessica Casalinova also is artistic, especially gifted in the art of calligraphy. She often drew with her daughter, and both parents foster Isabella’s creativity. “I fully believe in the importance of art,” Jessica said. “’Bella’ is very creative, and we like to foster that.”

While at Sacred Heart St. Francis de Sales, Isabella — an honor student — played trumpet in the school band, participated in plays and was a member of the Mount Anthony field hockey team. Her hobbies center around art — digital art, sketching and painting — but she also enjoys longboarding. A member of Sacred Heart St. Francis de Sales Church, she was an altar server.

She is the second Doodle for Google Vermont state finalist in recent years.

In the next stage of the contest, Google invites the public to vote for their favorite doodle from the 54 state and territory winners to help determine which students will go on to become one of the five national finalists. Voting will be open Aug. 17-21 on the Doodle for Google website, doodle4google.com.

Google will announce these five national finalists in August, one of which will go on to become the national winner and have his or her doodle featured on the Google homepage for a day.

National finalists will each win a $5,000 college scholarship, Google hardware and custom swag.

The national winner will get a $30,000 college scholarship, and his or her school will receive a $50,000 tech package toward the establishment or improvement of a computer lab or technology program.