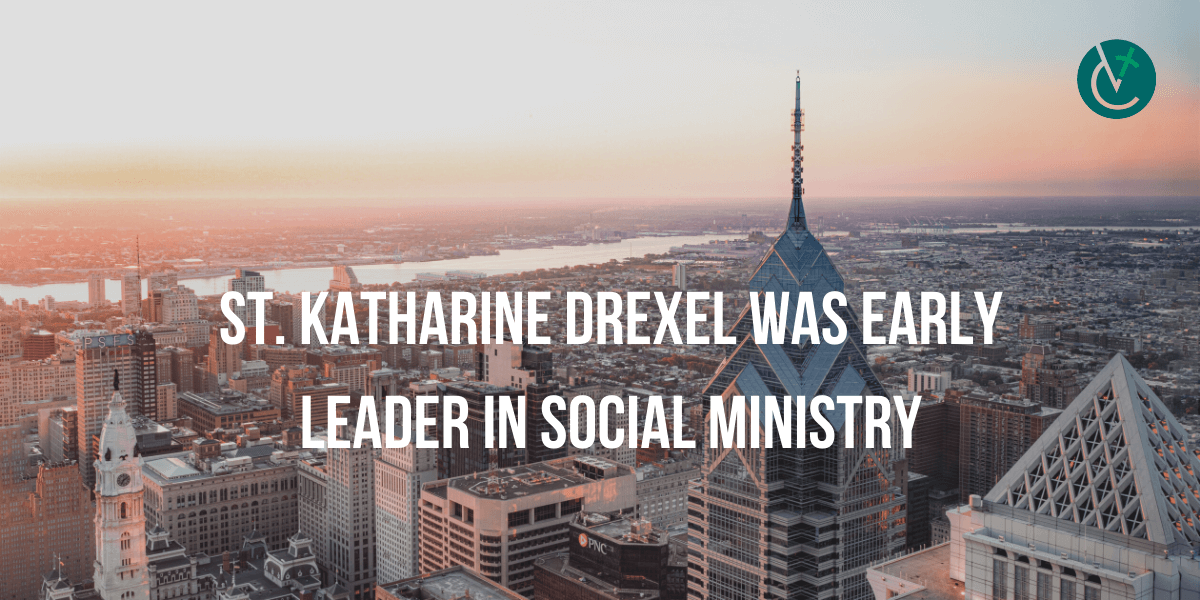 St. Katharine Drexel lived and shared a strong devotion to the Blessed Sacrament. But her insight into social justice and social ministry are particularly significant. Born before the outbreak of the American Civil War, St. Katharine fought the evils of racial and economic injustice decades before these issues began to get any real traction among American society.

My first encounter with the story of Katharine Drexel dates back to kindergarten. My mother, an artist and art teacher, took me with her as she went to teach art at a private Catholic school in Philadelphia. We left home early in the morning, boarding a train to downtown Philadelphia, changed trains and then took a bus or a cab to the school. I went to kindergarten while Mom taught art to the older children.

The morning train passed by the motherhouse of the Sisters of the Blessed Sacrament, an order of religious sisters founded by Katharine Drexel. Mom pointed out the motherhouse to me many mornings as we passed it. She mentioned the Mother Katharine Drexel was a wealthy woman who founded an order of sisters dedicated to the education and care of African Americans and Native Americans. At the time I had absolutely no grasp of the scope of Katherine Drexel’s work, nor of the importance of it. Yet, I do remember Mom telling me, “One day, Katharine Drexel will be named a saint.”

Katharine’s family had impressive wealth; her father had amassed a $15 million-plus estate, the equivalent of more than $400 million today. Yet, her parents had a strong charitable mindset, including an understanding that “kindness may be unkind if it leaves a string behind.”

In 1887, Katharine and her sisters had a private audience with Pope Leo XIII. They explained that they were privately financing missions to Native Americans but needed missionaries to staff them. Pope Leo suggested that Katharine become a missionary to them.  Subsequently, she entered a convent of the Sisters of Mercy in western Pennsylvania. In 1891, she took her final vows as a Mercy Sister. Later, she founded a new religious order, the Sisters of the Blessed Sacrament.

In addition to the missions in the western United States, her order founded Xavier University in New Orleans, the only Catholic University founded specifically for African American students. In total, she founded 145 missions and 62 schools for either African Americans or Native Americans.

She channeled the income stream from her father’s estate to the mission of her order. But far more important was the enormous impact on the African American and Native American populations she and her order served.

The cause for her beatification was begun in 1966. She was declared “Venerable” in 1987 by Pope John Paul II. She was beatified in 1988 and canonized St. Katharine Drexel in 2000.

It is curious that the miracles supporting the petition for her beatification and her canonization were miracles involving deaf individuals gaining hearing.  Both miracles were astounding — one in 1974 and another in 1994. The 1994 miracle involved a two-year old cured of nerve deafness. Perhaps those miracles confirmed that in her 96-year life span, St. Katharine Drexel enabled many to hear the Gospel and to experience the love of Christ. Her legacy endures in at least 24 locations where the sisters still serve, in Xavier University in New Orleans and in the unknown multitude of human lives touched by her compassion and that of the Sisters of the Blessed Sacrament.

St. Katharine’s leadership and example are nothing shy of prophetic. She recognized the link between the Blessed Sacrament — the Real Presence of the Lord — and the Mystical Body of Christ ministering to the oppressed, the least of the Lord’s brothers and sisters.

St. Katharine provides us with just such call to action.

—Deacon Pete Gummere serves at Corpus Christi Parish in St. Johnsbury. He is a bioethicist and serves as director of the Permanent Diaconate for the Diocese of Burlington.