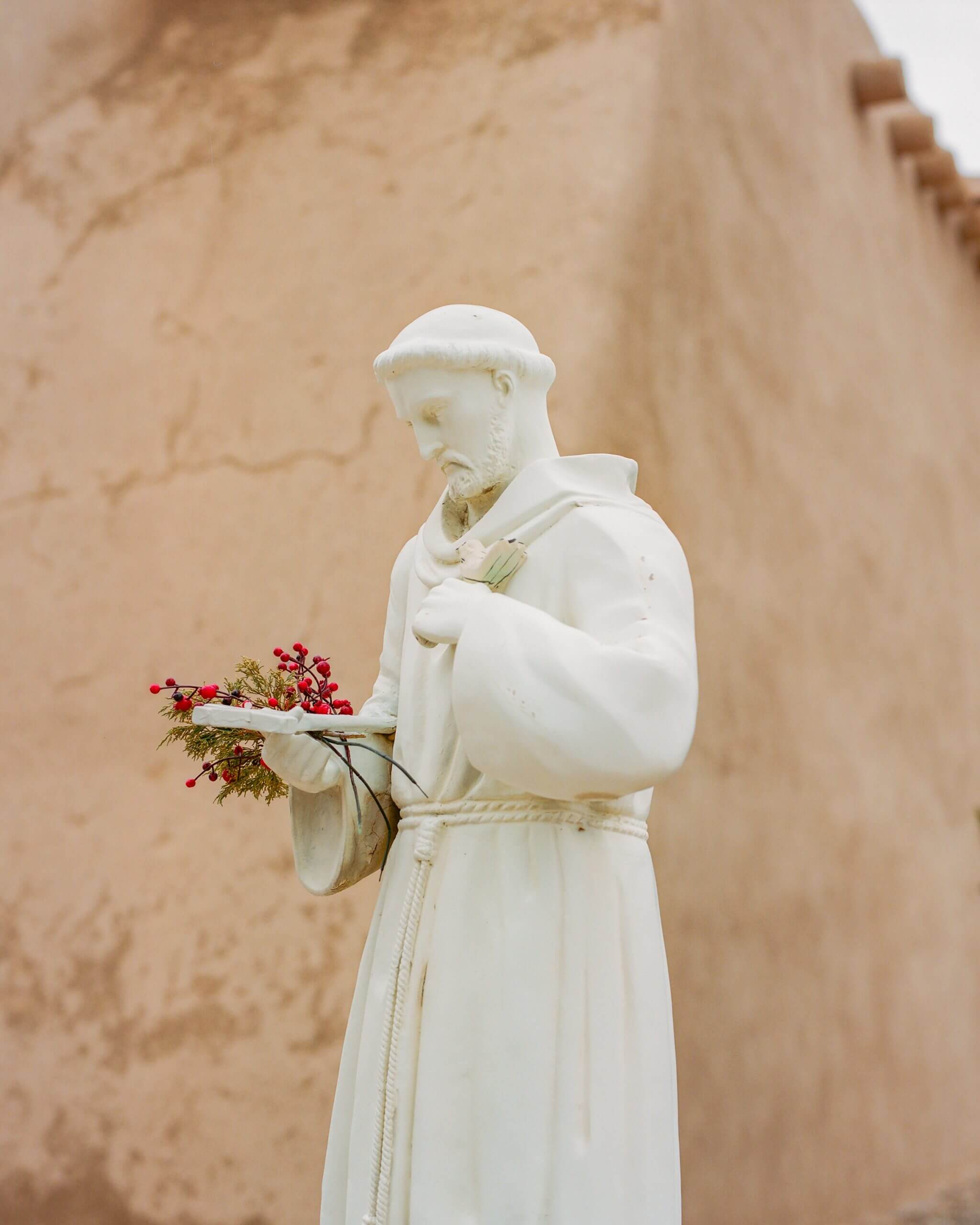 Photo Credit: CNS/Isabelle Baldwin - A marble statue of St. Francis of Assisi is seen outside the mission church named for him in Ranchos de Taos, New Mexico.

St. Francis of Assisi: Eyes to heaven and feet on Earth

Oct. 4 is the feast of the beloved St. Francis Assisi. The Church throughout history offers us the saints as models for how to approach a myriad of issues, and St. Francis of Assisi may be, once again, a timely saint for 2020.

Some contend that St. Francis approximates the life of Christ more than any other person who has ever lived. He began his life as a roving and singing Italian troubadour but ended up a troubadour for the Lord. G.K. Chesterton writes, “… he said from the first he was a troubadour, and said later that he was a troubadour of a newer and nobler romance. … He was a lover of God and really and truly a lover of men.”

Poverty, obedience, prayer and mortifications were all done for the love of a God who humbled Himself to share in our humanity (c.f. Phil 2:8). This love continually poured out in service to his fellow man, no matter who they were (even his enemies). Because of this Francis has been called “a second Christ” and the “mirror of Christ.” Indeed, his love was not simply a love for those who were easy to love but a sublime love that reached out to all with deep compassion and empathy.

The “love of St. Francis” has often been sentimentalized through garden statues and other pedestrian depictions. But Francis was instead a bold and fearless man who sought to literally turn the world upside down through the love of Christ. One of the most beautiful descriptions of his conversion comes from the biographer Julien Green:  “What had happened?  In the middle of a party, a sorry feast, with that ridiculous fool’s baton in his hand, Francis had fallen in love.  For years he had been fleeing someone or something, and suddenly that someone had caught up with him and blasted him with all the power of His tenderness.  Francis was twenty-five years old.  In the chess game of the Absolute, the knight had come le fou (the madman/fool) and God won.”

Going all in for God did, in fact, take Francis down the road of “foolishness” —  in the eyes of many, he had become a true fool.  But, in some ways, his life became an echo of St. Paul’s famous line from his First Letter to the Corinthians:  “For the foolishness of God is wiser than man’s wisdom, and the weakness of God is stronger than man’s strength.”

Francis became a stumbling block, another way forward and a light in an otherwise dark world. Wherever Francis went, he sought to heal, to bind up and to meet everyone with mercy and compassion.  When he encountered suffering and the misery of corruption, he did not flee.  Indeed, he did not simply preach love, he lived that love and even sang of it.

The world of St. Francis in the 12th and 13th centuries was not much different than our own. There was violence, injustice, religious hatreds and hypocrisy. Francis encountered within his own Church simony, gluttony, nepotism and the entire range of vices throughout monasteries and other religious houses. Despite all of this, Francis always and in all ways chose love (and chose to love holy Mother Church).

The “lady” who guided him was lady poverty. His poverty of life — both materially and in spirit — became the free means through which he could encounter all in love, truth and in purity of heart.  This expression and love of poverty is most famously continued today in his great gift to the Church — the creation of the first creche scene in Assisi (due to its association with the poverty of Christ).  Francis relayed to his brothers the virtue that brings us nearest and dearest to Christ:  “Poverty, my brothers! Know that poverty is the special way to salvation, for it is the food of humility, and the root of perfection, the fruit of which is manifold, though hidden. Poverty is the treasure, of which we read in the Gospel, which was hidden in the field; to buy which you must sell all, and in comparison with which, all that can be given for its purchase, accounts as nothing.”

One of the most striking scenes from the life of Francis (and there are many) is his famous trip to see of the Sultan of the Saracens in the Middle East.  After spending a year with the crusaders, he became disgusted with the bloodshed on both sides.  He instead sought to bring peace to a world riddled with violence.  In a scene that almost seems too fantastic to be true, Francis walked boldly between two large armies that were faced off for a mighty battle in order to meet the military leader and sultan from the other side.  The sultan, a biographer writes, “was one of the most refined men of his day, passionately fond of religious poetry, curious about philosophy, a student of medicine, etc.”  The sultan agreed to meet with Francis, who already by this time had an enormous reputation.  After this meeting, the sultan remarked, “I would convert to your religion, which is a beautiful one, but I cannot, for both of us would be massacred.”  But the sultan was so moved by his encounter with Francis that it forever changed his life.

What can we learn from St. Francis as we approach what is anticipated to be a tumultuous and even perilous ending for 2020?  Pax et bonum or “peace and goodness” was the traditional greeting and salutation for St. Francis and for those who followed in his footsteps.  Whatever happens over the next few months, may we be people of peace who always seek the way of peace through the Prince of Peace.  May the peace of Christ reign in our hearts no matter what enfolds.  In the words of St. Francis, may we be an instrument of God’s peace.  An instrument is something that creates beautiful sound.  May our lives be like a song that leads others to the love and peace of God.

May we also be people of goodness who seek what is good, see the good in others and always strive for the good in society.   St. Paul will say in his letter to the Galatians:  “…the fruit of the Spirit is love, joy, peace, forbearance, kindness, goodness and faithfulness.”

Finally, I am reminded of Psalm 23:  “Even though I walk through the dark valley, I will fear no evil, for You are at my side.  Your rod and your staff comfort me.  You prepare a table before me … you anoint my head with oil and my cup overflows.  Surely goodness and love will follow me all the days of my life and I will dwell in the house of the Lord forever.”