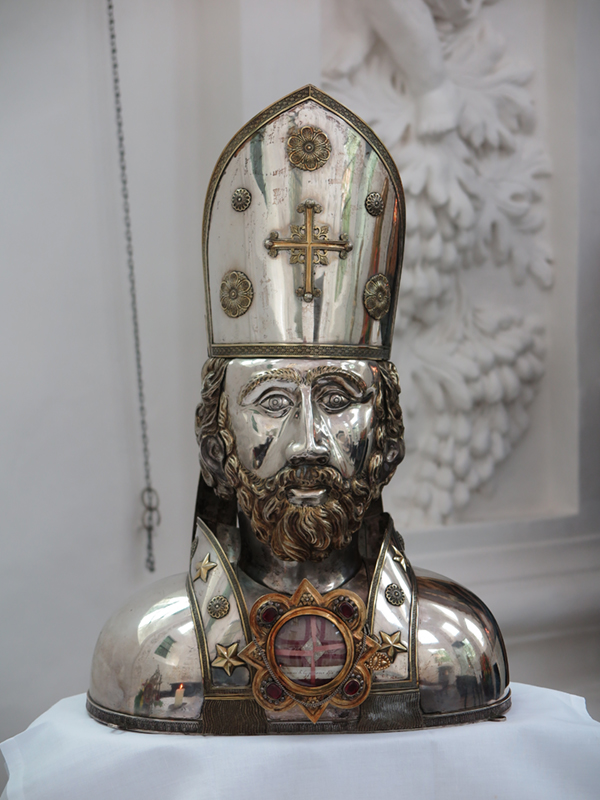 St. Cyprian of Carthage was born to pagan parents around the year 190 AD. As the son of a wealthy senator, he enjoyed all the privileges associated with that position. Highly educated, he became known as a famous and persuasive orator as well as a teacher of rhetoric and literature. Like his father, he was also a prominent civic leader.

Consequently, when he converted to Christianity in the year 246, it came as a bit of a shock to his contemporaries. Not only did he embrace this new religion, but he gave his considerable fortune away to the poor. Despite this turn of events, Cyprian did not stop his teaching and preaching work; instead Cyprian now used his gifts in service to the Church. Within a year he had been ordained a priest and shortly after that — against his will — he was raised to the position of Bishop of Carthage.

When the emperor Decius began a systematic persecution of Christians in 249, Cyprian found himself guiding his flock from a place of hiding, instructing and encouraging them through a series of letters. His critics maintained that he did this in a spirit of cowardice, refusing to stand up for the faith in the face of death, but Cyprian felt that he was of more use to his people alive.

When the persecution came to an end, the schism of Novation followed. It centered on the question of whether those who had denied the faith during this time of suffering — thereby committing the sin of apostasy — could now repent and be readmitted to the Church. Both Cyprian and Pope Cornelius maintained that there was, in fact, a way back into the community for these people, but another priest, Novation, strongly disagreed. It was his contention that only God could forgive such a serious sin and that the Church had no authority to do so.  Ultimately, Cyprian and Cornelius’ position became the official teaching of the Church, and the understanding of what we now know as the Sacrament of Penance was advanced. As for Novation, he was excommunicated in 251.

When Pope Cornelius died, Cyprian found himself at odds with the succeeding pope, Stephen, over a question of the validity of baptism conferred by heretics and schismatics. But before this could erupt into an open breach, another wave of persecutions began under Emperor Valerian.  At first, Cyprian was exiled from Carthage by the emperor then subsequently brought back to the city for trial. This time, Cyprian did not go into hiding. He, along with Pope Stephen, was martyred in Carthage in 258. Before he died, Cyprian blessed all present and even gave 25 gold coins to his executioner.

The first North African martyr, St. Cyprian is also the patron saint of North Africa. In the Western Church, his feast day is celebrated on Sept. 16.