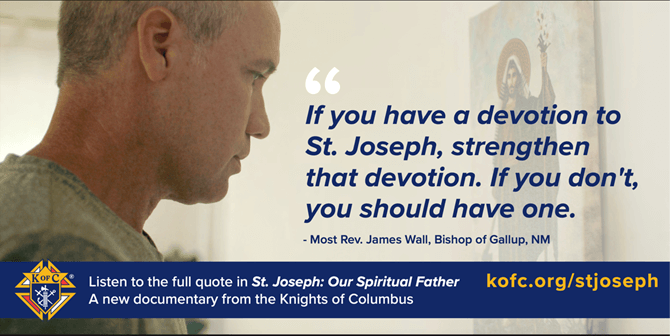 A new documentary, “St. Joseph: Our Spiritual Father,” produced by the Knights of Columbus, sheds light on one of the most hidden protagonists in the Bible. The 60-minute documentary premiered on Oct. 10 for a 6-week run on ABC- affiliated stations across the country through a partnership with the Interfaith Broadcasting Commission.

The film’s release coincides with the final months of the special Year of St. Joseph, declared by Pope Francis to encourage each person to mold their life according to the example of St. Joseph and turn to him in prayer.

“St. Joseph is often considered the silent, humble witness of the Bible,” said Patrick Kelly, Supreme Knight of the Knights of Columbus. “The truth is that he models for each one of us the importance of prayer, obedience and courage in our lives. I encourage everyone to watch this documentary as a way to go to St. Joseph, increase their devotion to him and allow his example to inspire us in our many challenges.”

Using reenactments, interviews with scholars and the inspiring witness of contemporary people with a devotion to St. Joseph, the documentary offers an opportunity to learn about Jesus’ foster father from a historical perspective and the extent to which a devotion to him can be life-changing.

“Joseph waits silently for us, ready to guide us in the same way he helped our Lord,” Kelly added. “Throughout my life, I have found him to be a powerful help when confronted with tough choices, and I encourage others to turn to him as well.”

“A spiritual father is forever interceding before God for your sake,” said Mother Agnes Mary Donovan of the Sisters of Life, interviewed in the film. “He cares for the good of your life. He cares that God’s plan within your life be fulfilled.”

Segments from the documentary and resources on St. Joseph, as well as a schedule of the ABC airings, are available at kofc.org/stjoseph.

Learn more about the Knights of Columbus or join the order by visiting kofc.org.