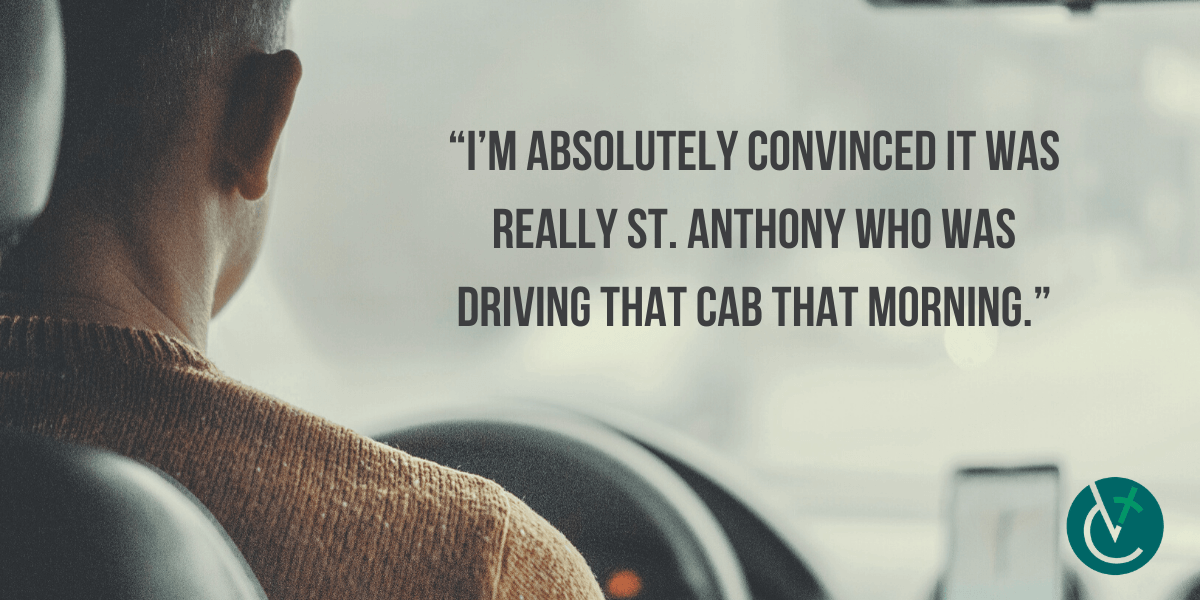 We’ve all read stories of saints.  But what happens when a saint’s story intersects with our own, when he or she enters into our daily lives in such a way that there is no doubt that we have been visited and helped by the very best of friends?

Several years ago, a couple of Catholic colleagues of mine and I had gathered for coffee, and our conversation eventually turned to religion and then to the saints.

“You know, I had an experience once,” said one, whom I will call Marilyn. “It happened when I was very young, just out of college. And I have no other way to explain it except for divine intervention.”

Marilyn had just gotten her first job as a teacher in a Catholic school in the outskirts of Boston. At the time, she was broke, and a car of her own was out of the question, but she could afford a bus pass, so that is what she bought.

On her first day of work, Marilyn showed up several minutes early at the bus stop; this was the one day she did not want to be late. Spotting the bus coming from several blocks away, she opened her purse to get her pass, so it would be ready as soon as she boarded.

Except that it wasn’t there. Frantically, Marilyn checked her wallet, then the pockets inside her purse, then everything else in the purse, hoping that it simply had gotten mixed up with something else. As panic set in, the bus, the only one that could get her to school on time from that neighborhood, pulled up. The doors opened and everyone at the stop got on except Marilyn. She had no extra money with her, and without that pass, she had nothing for the fare. The bus pulled away and Marilyn watched it go. Then she burst into tears.

At that moment, a cab pulled up and the driver rolled down the window. “What’s the matter?” he asked. Marilyn, maybe because he looked so kind, poured out the whole story. “Get in,” he said. “I’ll get you there on time.” She sobbed that she had no money, but that apparently didn’t matter, so into the back seat she crawled. Through what was left of her tears, she could just make out the cabbie’s name on the hack license.

Anthony chatted pleasantly with her for the rest of the trip, and Marilyn made it to school ahead of the bus. As she climbed out of the cab she gushed her gratitude over and over, but the driver just smiled.  “Good luck on your first day,” he said, and the cab pulled away.

Marilyn ducked into the teacher’s lounge as soon as she could to freshen up before class. As she opened her purse, there, on top of her wallet, lay the bus pass.

“To this day,” she said, “I’m absolutely convinced it was really St. Anthony who was driving that cab that morning.”

Share This Post
Saints, Kay Winchester, St. Anthony
See More
Last Article
‘Grace and consolation in being in community, even if it is online’
Next Article
What is a plenary indulgence?
Back to Vermont Catholic Magazine