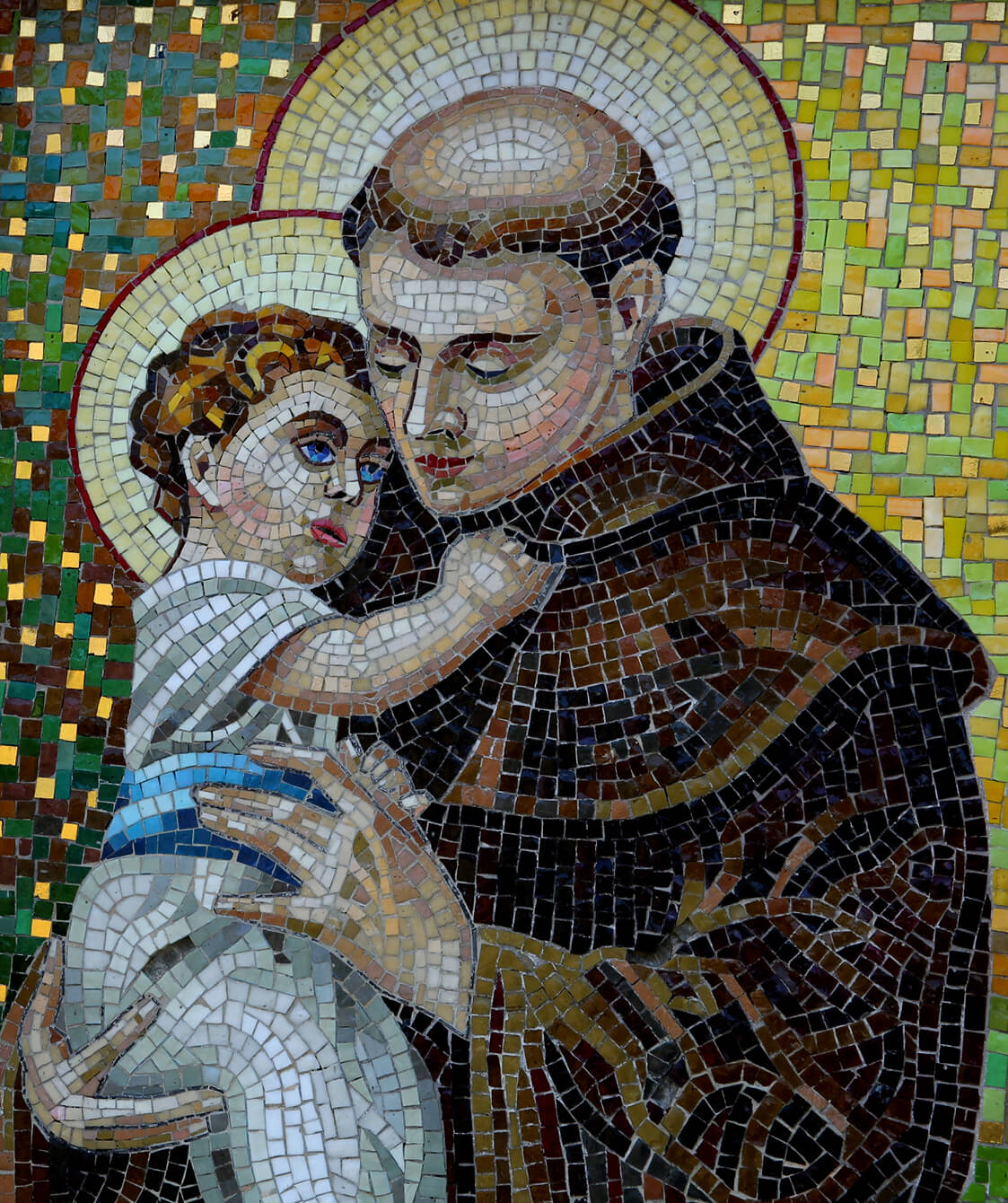 Photo Credit: CNS/Sydney Clark - A mosaic of St. Anthony of Padua, whose feast day is June 13, is seen on the grounds of the Franciscan Monastery of the Holy Land in America in Washington, D.C. Pope Francis asked that the world's Franciscans and devotees of St. Anthony of Padua be inspired by this 13th-century saint by being "restless" to hit the road and share God's love through word and deed.

The June 13 feast of St. Anthony of Padua and the novena, the nine days of prayer leading up to it, mark some of the busiest times at Washington’s Franciscan Monastery of the Holy Land in America — and any temple worldwide, for that matter, that observes his feast.

But this year, because of the coronavirus pandemic, the Holy Land friars and others who live at the Washington monastery will observe the celebrations with a virtual novena and feast via video posted daily at the monastery’s myfranciscan.org website or at myfranciscan.org/saint-anthony-novena.

“Because of restrictions still in place, we can’t have the feast day Mass as we usually have it,” said Father James Gardiner, a Franciscan Friar of the Atonement who lives at the monastery.

In the first video installment of the novena on June 4, Franciscan Father Greg Friedman explains that “Anthony is also the patron of the custody of the Holy Land, the international community of Franciscan friars who serve in the places where Jesus and his first followers walked. The friars of this monastery in Washington are part of that service as well.

“On each of these nine days leading to the feast of St. Anthony on June 13, we will ask the intercession of the Padua saint for the mission of the Holy Land Franciscans, the people they serve and for you, who join this novena with your own personal intentions.”

St. Anthony of Padua, born Fernando Martins de Bulhoes in Lisbon, Portugal, in the 12th century, is arguably one of the most venerated of saints in Catholicism with many devotees turning to his intercession to find lost objects. He was noted for being a powerful orator and because he traveled throughout Italy to preach, he also is known as a patron saint for travel and travelers. He died in Padua in 1231 at age 35 and was beatified and canonized within a year of his death.

Devotees who believe he interceded for them or credit his intercession for a miracle received sometimes donate bread, called St. Anthony bread, on his feast day and sometimes during perpetual novenas around the world.

A story about the tradition of the bread says that a woman prayed to St. Anthony to restore her child who drowned near the basilica bearing his name in Padua, promising she would offer grain for the poor in return. The sharing of the bread to honor St. Anthony has become a popular practice in parishes that bear his name or in Franciscan-run parishes.

The Franciscans at the monastery uphold that tradition.

The feast day Mass at the monastery, said Father Gardiner, “usually includes the blessing of hundreds of loaves of bread specially baked in honor of St. Anthony (they’re distributed at the end of the Mass together with dried lilies).”

This year, however, the friars are asking devotees who participate in the online novena and feast June 4-13 to give bread to the poor in other forms.

“We have invited people to send their petitions so that we can all pray for them,” Father Gardiner said. “We’re also live streaming the feast day Mass since only resident friars can attend (socially distant, of course). Instead of taking blessed bread home, we’re inviting people to send ‘bread’ in the form of donations to help people in the Holy Land.”

Donation instructions can be found at myfranciscan.org.

On the first day of the novena this year, the friars offered a reflection based on a quote from St. Anthony, who is a doctor of the church, meaning his writings have had a particularly notable influence on Catholic theology or spirituality.

“When it is dark, we do not see how dusty and dirty our house is,” the saint wrote. “Only when the place is flooded with sunlight do we realize its awful condition. So, we need the light of God’s grace to show us the real state of our soul and induce us to clean up our hearts!”

Father Friedman asked viewers to reflect on that writing in the middle of the pandemic, saying that even as it has “required most of us to stay at home, perhaps even to stay in our rooms … perhaps too confining for some of us, but just think about those who have contracted the virus and are isolated in a hospital room.”

“For us today, we hear St. Anthony’s words allowing in light,” he said. “St. Anthony urges us to allow some light into our house, into our rooms. Of course, St. Anthony is speaking metaphorically here, poetically. He’s talking about the ‘house’ which is our heart, and the ‘light’ is God’s love, God’s presence.

“That ‘inner space’ is our true self and, in fact, it’s where God lives within us, the light is already there; I think we’re called to open a door within our heart and perhaps to experience God’s love as we are present there. May the love of God, the light of God, shine in you during the days of this novena.”

Share This Post
Saints, St. Anthony of Padua, Franciscans, Holy Land Franciscans, Franciscan Monastery of the Holy Land in America
See More
Last Article
Welcome Back to the Celebration of Mass
Next Article
A message from Msgr. John McDermott
Back to Vermont Catholic Magazine