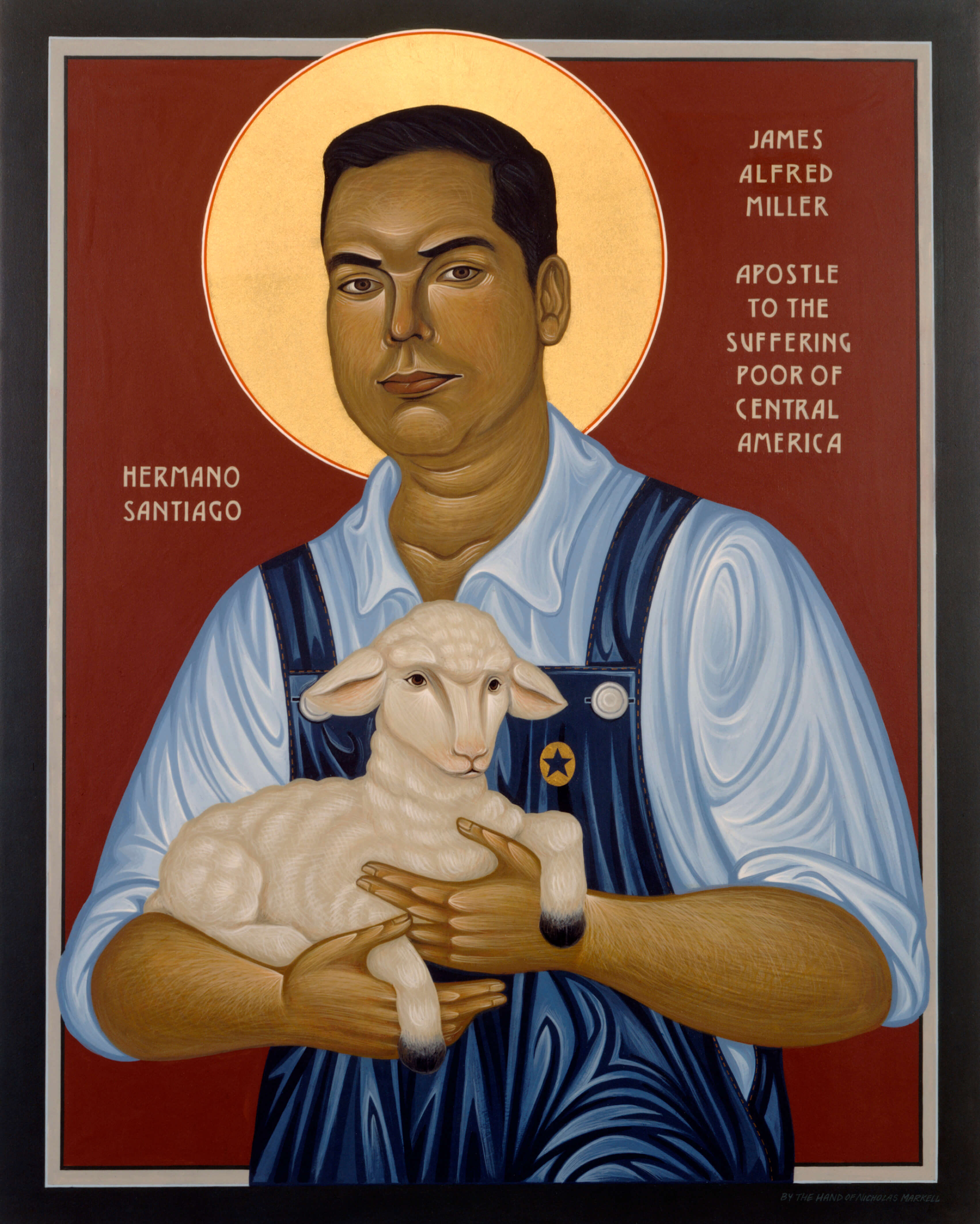 Photo Credit: CNS/courtesy Christian Brothers of the Midwest - Brother James Miller, who was born in 1944 in Wisconsin and shot to death in Guatemala in 1982, has been recognized as a martyr by the Vatican and will be beatified Dec. 7. Minnesota artist Nick Markell created this image of "Hermano Santiago," as he was known, donned in overalls with a gold nimbus encircling his head and a lamb in his arms.

A combination of prayer and research went into his creative process, including a picture of the late missionary holding a lamb in Guatemala. Add to that the fact that he often wore overalls, and an image was emerging: the traditional ambiance of a religious icon with a contemporary twist, showing Brother James — “Hermano Santiago,” as he was known — donned in overalls with a gold nimbus encircling his head and a lamb in his arms.

“It made him more accessible,” said Markell, a member of St. Mary Church in Stillwater and owner of nearby Markell Studios. “Perhaps that’s why the image has taken off a bit.”

It has become the most widely known image of the Midwestern saint-to-be.

Markell spent a month painting with acrylic wash and gold leaf in his apartment; he listened to Gregorian chant, and incense filled the air.

Markell focused on Brother Miller’s prominent eyebrows and eyes. “I tried to capture an essence of that,” he said.

As he painted, he contemplated the message behind the martyr.

“He represented for me an everyday saint. There’s a certain status about being martyred, but this is possible for the everyday person. A lot of the icons I might do over the years are saints that seem out of reach — the great saints of history. But then you have an example of a recent saint who walked the streets with us, but their faith was strong, and then died for it.”

He said the lamb remains a reflection of Brother Miller’s gentle, attentive outreach, embracing each child as Jesus, the Good Shepherd, did.

Brother Miller was martyred in 1982 — at age 37 — during the Guatemalan Civil War. Three hooded men found him on a ladder repairing a wall and shot him. Many assume he was killed because he fought to keep his students from being forced into the military.

Pope Francis officially recognized Brother James as a martyr last year, clearing the way for beatification. He will be beatified on Dec. 7 in Guatemala.