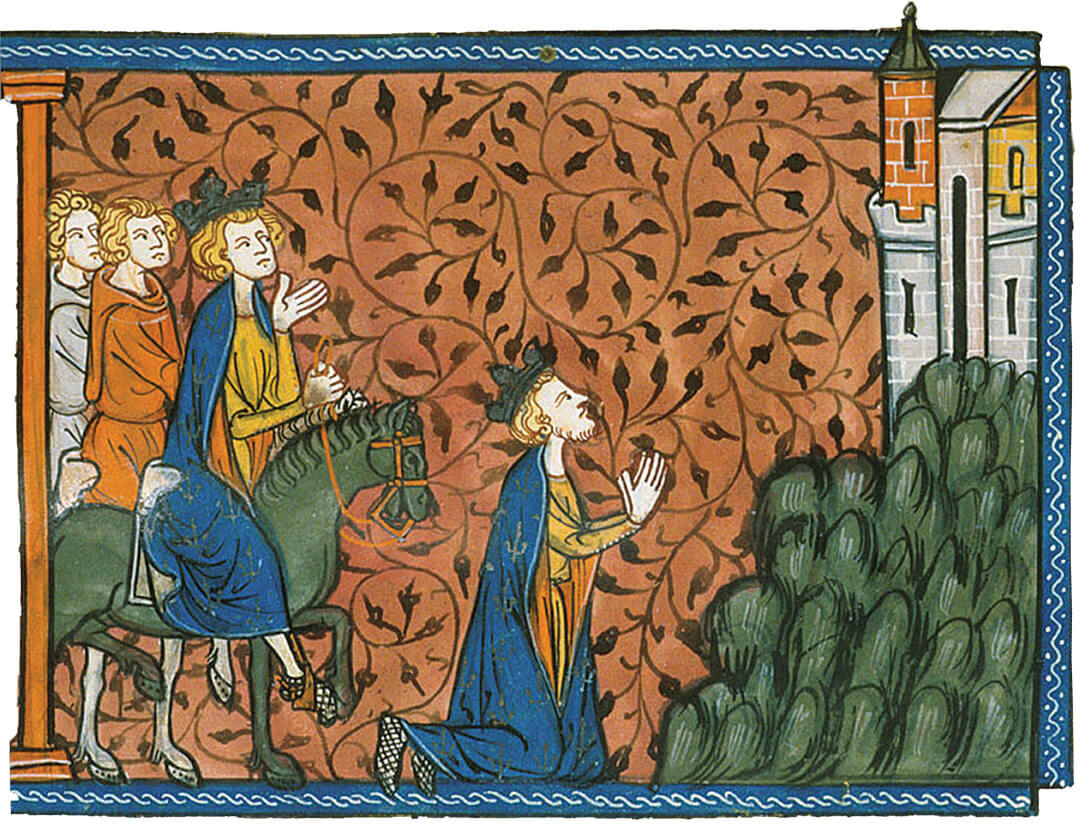 Louis IX of France, who was also known as Most Christian King, was one of those exceptions to the rule — although many monarchs at their coronation declared themselves “bound by oath to behave as God’s anointed,” he actually lived out this vow. He truly was a model king.

Louis was born on April 25, 1214, to King Louis VIII and Blessed Blanche of Castille. At the age of 12, Louis became King of France upon the death of his father, but until he reached his majority at age 21, France was ruled under the regency of his mother. At 19, he married Margaret of Provence, who, in the course of their marriage, bore him 11 children.

Unlike the previous two reigns, once he achieved full authority as king, Louis sought to bring peace and stability to France and is credited with both judicial and civil reform. For instance, he replaced trial by combat with a more orderly examination of witnesses and encouraged the use of written records in court. A man of peace, he also sought not only to put an end to fighting but to resolve and remove the causes that led to repeated conflict in the first place.

His relationship with the Church was notable as well, and he had a reputation of defending the French clergy against secular encroachments on their authority. Though certainly a respecter of the papacy, he would nonetheless defended royal interests if he felt that the pope had gone too far, as happened when Pope Innocent IV excommunicated the Holy Roman Emperor Frederick II.

But by and large, Louis sought the way of peace and reconciliation rather than that of conflict and was respected and trusted by kings and clergy alike.

The king’s piety was never fully known by the people of France; they were unaware of the long hours of prayer and fasting that he undertook, but they were certainly fully cognizant of how he lived out his holiness. A member of the Third Order of St. Francis, he was known for inviting 13 “guests” from among the poor to dine with him each day, and during Advent and Lent, anyone who asked was given a meal, often served by Louis himself. He founded hospitals for the poor, the blind and prostitutes, treating with respect all with whom he came into contact.

The one exception to his rule of peace, however, came with his support for and participation in, two ultimately unsuccessful Crusades. The seventh Crusade, in 1244, ended with the capture of some six thousand Christians; they were later ransomed. Louis himself remained in Syria for four years, returning to France upon the death of his mother.

The eighth and final major Crusade was undertaken in 1267, but this too was unsuccessful. The army was decimated by disease, and both Louis and his son died in 1270.

Canonized by Pope Boniface VIII in 1297, Louis’s feast day is celebrated on Aug. 25; he is patron of the Secular Franciscan Order.

The Thomistic Institute in Washington has launched "Aquinas 101," a free online video course that [...]

Read More
Next Article
The Real Presence: What do Catholics believe and how Church can respond
Back to Vermont Catholic Magazine