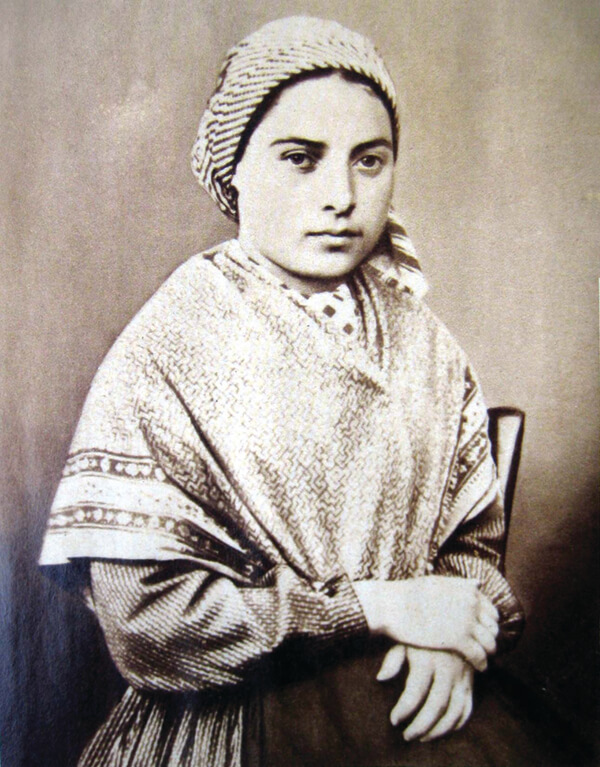 If anyone still needs to be convinced that God often chooses those who, in the eyes of the world, are the least among us to convey His messages, then they need look no further than the story of St. Bernadette Soubirous.

Born in 1844 to a desperately poor family in Lourdes, France, this child, who was plagued throughout her life with severe asthma and considered “dull” by her contemporaries, became the one to whom the Blessed Virgin entrusted her vision of love and healing.

In 1858, Bernadette and her younger sister were collecting firewood when a lovely lady, dressed in white and blue, appeared above a rose bush in a grotto known as Massabielle.  Though no one else could see her, Bernadette, whom the lady had blessed with a rosary, immediately fell to her knees, took out her own rosary, and began to pray.

When she and some other girls returned to the grotto three days later, Bernadette experienced the vision again; in total, the beautiful lady asked her to return to the same place each day for the next fortnight.

During that time, the lady revealed herself as the “Immaculate Conception,” a dogma that had been defined just four years earlier by Pope Pius IX and was unknown to Bernadette.  In addition, the lady, now identified as the Blessed Virgin, instructed that a chapel be built on the spot where she had appeared to Bernadette.  She also asked that Bernadette dig in the ground; this the child did and a trickle of muddy water appeared that soon turned into a small stream.  By the next day, the spring ran fresh and clear.

In all, Bernadette experienced 18 visions of the Blessed Mother.  In her own hometown, some believed in the apparitions while others maintained that the child was mentally ill. Church authorities and members of the French government soon put Bernadette through a rigorous set of interviews to determine if she was telling the truth, and by 1862, it was confirmed that she was.

The spring that Bernadette dug in Lourdes at the request of the Virgin has since become one of the most visited Marian shrines in the world; more than 200 million visitors have come seeking cures, both physical and spiritual, that are attributed to its healing waters.

Bernadette herself continued to be the subject of constant and mostly unwanted attention; as a result, she retired to the care of the Sisters of Charity of Nevers where she was able to live a life of relative obscurity, simplicity and prayer. In 1866, she took the habit as a postulant and joined the sisters, working as an infirmary assistant and sacristan.

Bernadette’s childhood asthma worsened as the years went by, and she also developed tuberculosis of the knee, which caused her great pain and suffering until her early death in April 1879; she was 35 years old.

Canonized in 1933, St. Bernadette is the patron of illness and those ridiculed for piety.  Her feast is celebrated April 16.