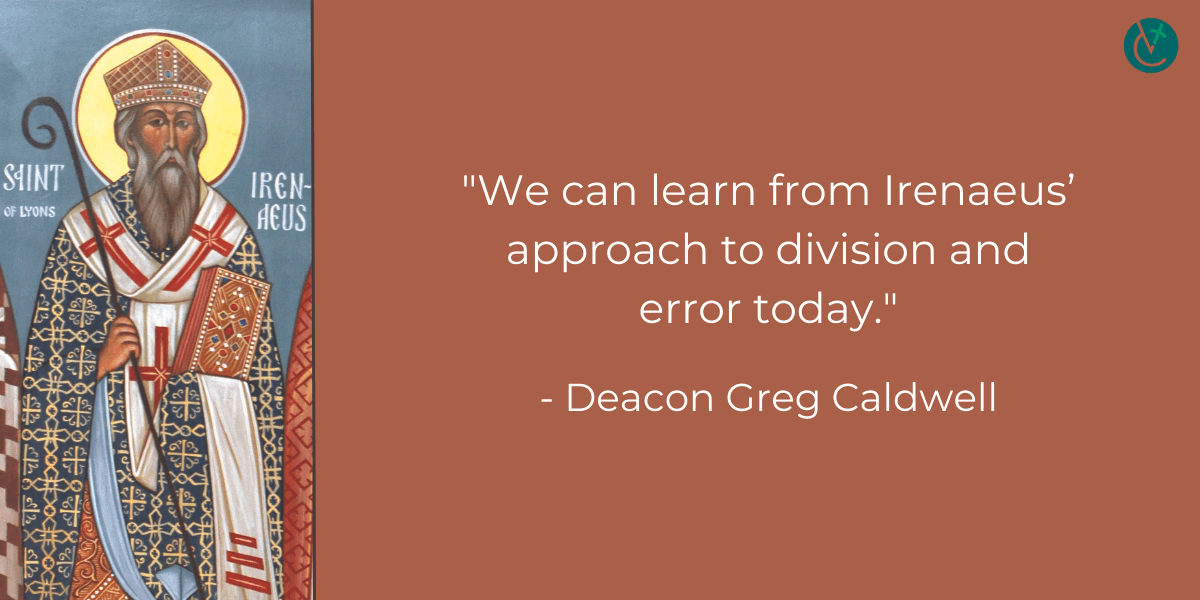 Against the heresies: Doctor of Unity?

He may seem an odd fit to be considered a Doctor of Unity; his most famous work is Against the Heresies.

Yet, Pope Francis, during an audience with the St. Irenaeus Orthodox-Catholic Joint Working Group last year, announced that St. Irenaeus of Lyon will be declared a Doctor of the Church with the title Doctor Unitatis.

St. Irenaeus is a the second-century theologian known for his defense of orthodoxy amid the rise of gnostic sects.

He is a saint that might be particularly important to our times when division can seem rampant.

But what is it about Irenaeus that would make him the Doctor of Unity?

St. Irenaeus, the joint working group’s website said, “is revered as a patristic father in both the Eastern and Western churches” and “thus represents an example of the spiritual connection between the churches in East and West, which the working group seeks to promote through its discussions.”

Irenaeus shows the unity of East and West; it is no accident that Pope Francis made the announcement at an Orthodox-Catholic Working Group. Irenaeus was born in Asia Minor, modern-day Turkey, around AD 130. Asia Minor is in the East, but he served as a priest of Lyon — in the West — before succeeding the martyr St. Pothina as bishop of Lyon before being martyred himself around AD 202.

Irenaeus “came from the East, exercised his episcopal ministry in the West, and was a great spiritual and theological bridge between Eastern and Western Christians,” the pope said in October said.

Though he can be seen as a bridge between the East and the West, there is a more profound point to Irenaeus being the Doctor of Unity. He is an example in both his life and his teaching.

There was discord and division in his time from various heresies. The most significant heresy was gnosticism, which argued that salvation was available through sacred knowledge only available to a few. However, he could not simply quote scripture to show why the Gnostics were wrong, for they could quote scripture just as much. The problem was that they were misinterpreting scripture.

So how did Irenaeus solve this division in ways of interpreting scripture?

He recognized that while Scripture can be read in many different ways, the act of interpreting Scripture requires more than a simple “read” or personal interpretation.  Interpretation requires a hypothesis, or lens, what he calls the regula fidei or “rule of faith,” basically a precursor to the Apostle’s Creed we have today. One cannot understand scripture apart from this regula fidei, this apostolic faith.

The Church, as Ireneaus wrote, “believes these points [the faith received from the apostles] just as if she had but one soul, and one and the same heart, and she proclaims them, and teaches them, and hands them down, with perfect harmony, as if she possessed only one mouth.”

In holding to this unity within the Church and her apostolic faith, one then comes to interpret and understand scripture. Since the gnostics are separated from the Church and do not have the regula fidei, they cannot read scripture correctly, even as they quote it abundantly.

Thus it is that Irenaeus is the Doctor of Unity. His solution to heresy was not just controversial arguments and insults. He calls for the unity of the Church  in the apostolic faith. He recognizes that it is only in the unity of the Church and the apostolic faith that one can find the true faith and interpretation of scripture. In fact, “it is not necessary to seek the truth among others which it is easy to obtain from the Church; since the apostles … lodged in her hands most copiously all things pertaining to the truth.” Unity in the faith and the Church is the solution to heresy for Irenaeus.

We can learn from Irenaeus’ approach to division and error today. Following his example, can we approach those who might be wrong with more than arguments and insults, but with a call to unity holding to the apostolic faith and the Church? For it is then that the truth might really be seen.

—Deacon Gregory Caldwell is a seminarian for the Diocese of Burlington.