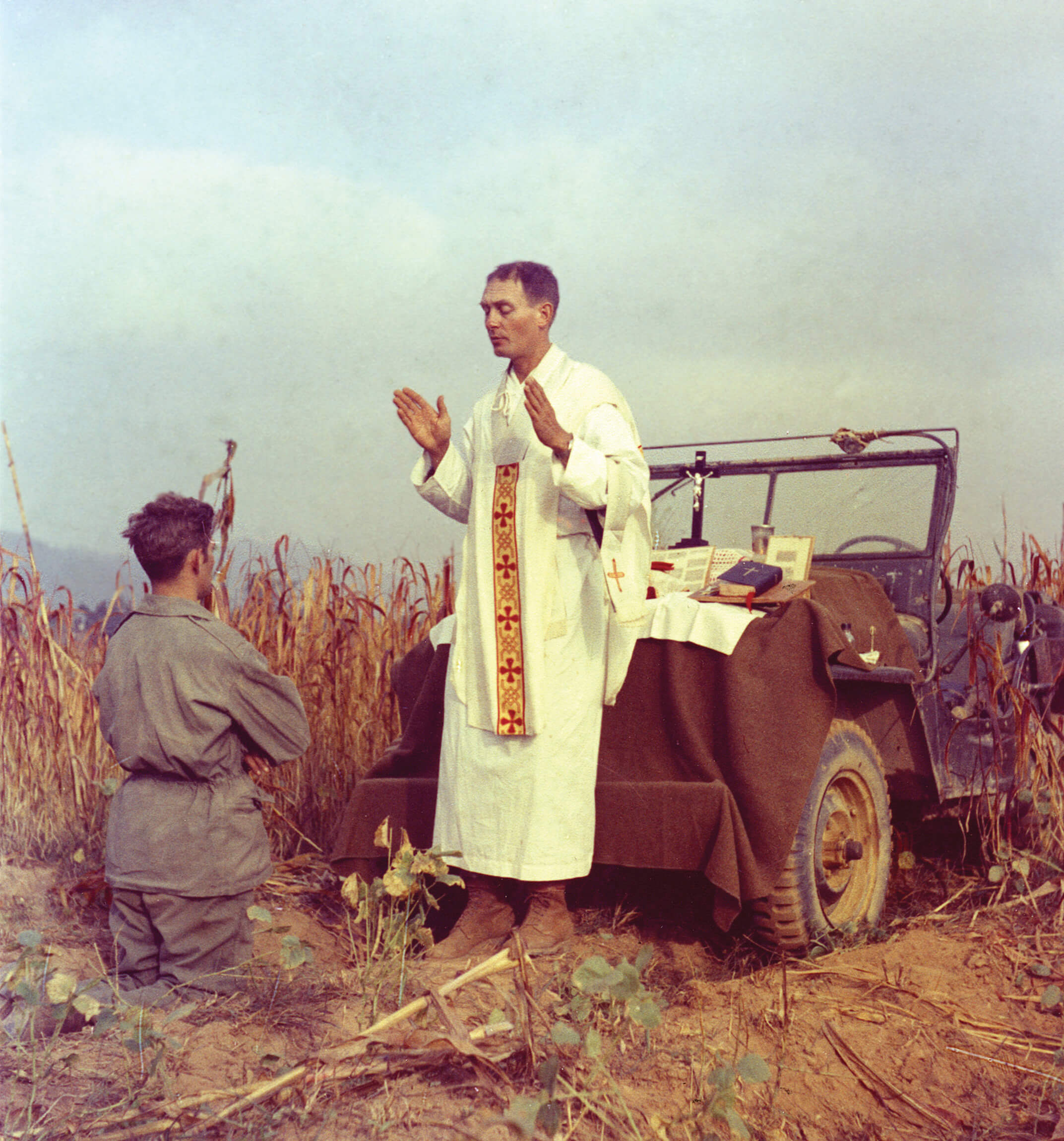 Photo Credit: CNS/courtesy U.S. Army medic Raymond Skeehan - U.S. Army chaplain Father Emil Joseph Kapaun, who died May 23, 1951, in a North Korean prisoner of war camp, is pictured celebrating Mass from the hood of a jeep Oct. 7, 1950, in South Korea. He is a candidate for sainthood.

A journey toward sainthood through the Army

A military chaplain who was a hero during the Korean War and died in a prison camp is on the road to sainthood.

U.S. Army chaplain Father Emil Joseph Kapaun is known to have dragged the wounded out of foxholes and given the Last Rites to the dying. He heard confessions with the sounds of gunfire and explosions in the background. He stopped an execution and negotiated with the enemy for the safety of wounded Americans, and he carried young soldiers on his back to safety.

During a forced 87-mile death march to a POW camp, he picked up a wounded prisoner and carried him on his back for part of the way.

Born of Czech immigrants in the farming town of Pilsen, Kansas, in 1916, Father Kapaun was ordained in 1940 and served as an Army chaplain in Burma during World War II and during the Korean War, he was the Catholic chaplain assigned to the 3rd Battalion of the 8th Cavalry.

He was credited with saving hundreds of lives through his loving care, compassion and spirituality.

According to catholicdioceseofwichita.org/father-kapaun, in his seven months in the prison camp, Father Kapaun spent himself in heroic service to his fellow prisoners without regard for race, color or creed, giving them help and hope when they needed it most. “Ignoring his own ill health, he nursed the sick and wounded, stole food for the hungry, picked lice off of men, washed dirty and soiled clothing and encouraged men through prayer and humor to keep fighting for life.”

When he became sick, the Chinese moved him to a hospital, where, denied medical assistance, he died on May 23, 1951.

“Two years later the surviving prisoners of war were released, and with them came a beautiful crucifix carved in the camp by a Jewish POW who was inspired by tales of Father Kapaun’s deeds,” the website notes. “The prisoners testified to Father Kapaun’s role in their survival and began to tell the world about their heroic and saintly chaplain.”

Father Kapaun was declared a Servant of God by Pope John Paul II in 1993.

In 2013 he was awarded the Congressional Medal of Honor by President Barack Obama, one of only five chaplains to receive the nation’s highest award.

—Information for this story also came from monasteryicons.com.

Share This Post
Saints, Father Emil Joseph Kapaun, Korean War, Chaplains, Army
See More
Last Article
Catholic Press Association Awards
Next Article
What’s in a name and why is it written like that?
Back to Vermont Catholic Magazine