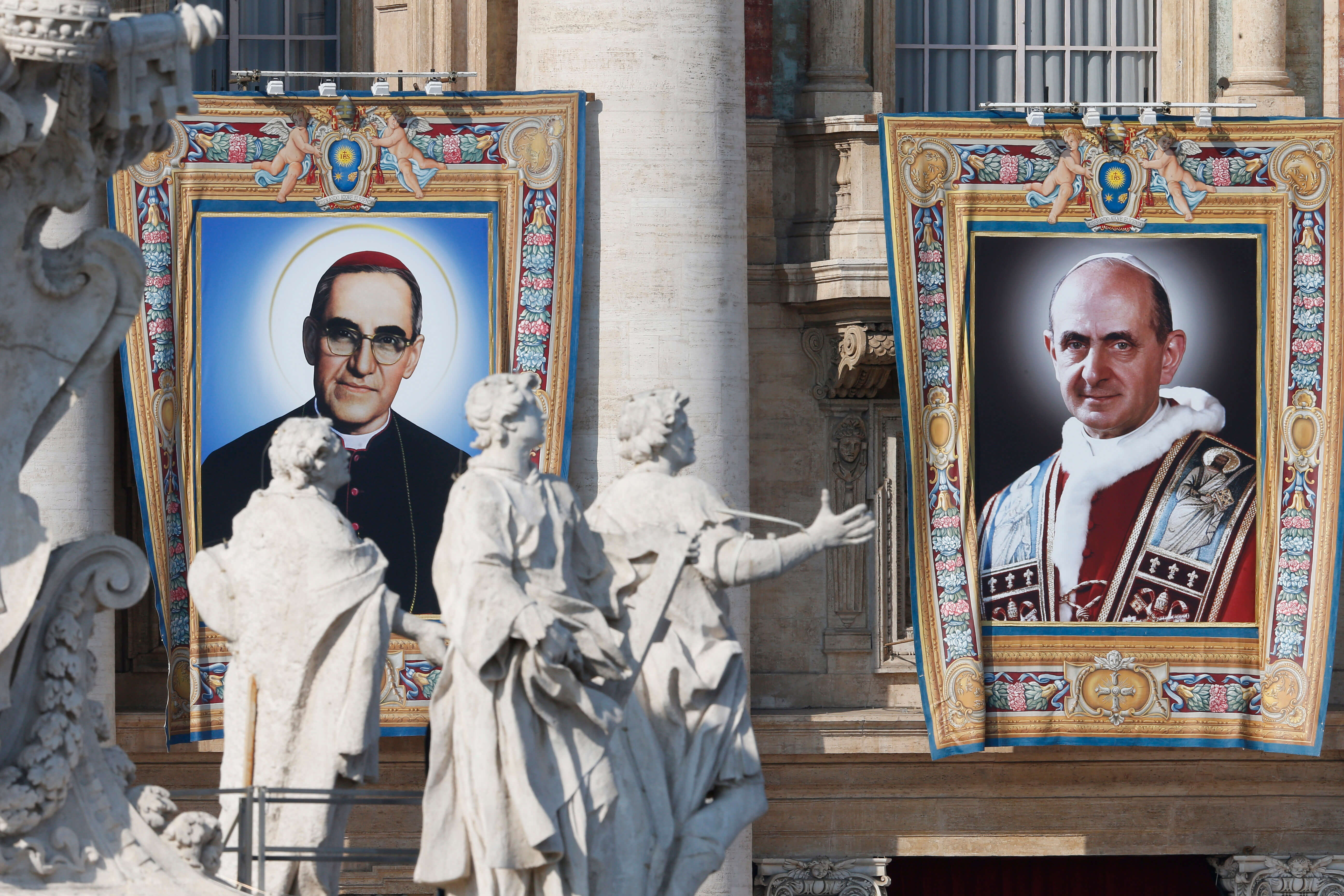 Carrying Pope Paul VI’s pastoral staff and wearing the blood-stained belt of Archbishop Oscar Romero of San Salvador, Pope Francis formally recognized them, and five others, as saints of the Catholic Church.

Thousands of pilgrims from the new saints’ home countries — Italy, El Salvador, Spain and Germany — were joined by tens of thousands of others Oct. 14 in St. Peter’s Square to celebrate the universal recognition of the holiness of men and women they already knew were saints.

Carolina Escamilla, who traveled from San Salvador for the canonization, said she was “super happy” to be in Rome. “I don’t think there are words to describe all that we feel after such a long-awaited and long-desired moment like the ‘official’ canonization, because Archbishop Romero was already a saint when he was alive.”

Each of the new saints lived lives marked by pain and criticism — including from within the Church — but all of them dedicated themselves with passionate love to following Jesus and caring for the weak and the poor, Pope Francis said in his homily.

The new saints are: Paul VI, who led the last sessions of the Second Vatican Council and its initial implementation; Romero, who defended the poor, called for justice and was assassinated in 1980; Vincenzo Romano, an Italian priest who died in 1831; Nazaria Ignacia March Mesa, a Spanish nun who ministered in Mexico and Bolivia and died in 1943; Catherine Kasper, the 19th-century German founder of a religious order; Francesco Spinelli, a 19th-century priest and founder of a religious order; and Nunzio Sulprizio, a layman who died in Naples in 1836 at the age of 19.

“All these saints, in different contexts,” put the Gospel “into practice in their lives, without lukewarmness, without calculation, with the passion to risk everything and to leave it all behind,” Pope Francis said in his homily.

The pope, who has spoken often about being personally inspired by both St. Paul VI and St. Oscar Romero, prayed that every Christian would follow the new saints’ examples by shunning an attachment to money, wealth and power, and instead following Jesus and sharing his love with others.

And he prayed the new saints would inspire the whole Church to set aside “structures that are no longer adequate for proclaiming the Gospel, those weights that slow down our mission, the strings that tie us to the world.”

Among those in St. Peter’s Square for the Mass was Rossi Bonilla, a Salvadoran now living in Barcelona. “I’m really emotional, also because I [made] my Communion with Msgr. Romero when I was eight years old,” she told Catholic News Service.

“He was so important for the neediest; he was really with the people and kept strong when the repression started,” Bonilla said. “The struggle continues for the people, and so here we are!”

Claudia Lombardi, 24, came to the canonization from Brescia, Italy — St. Paul VI’s hometown. Her local saint, she said, “brought great fresh air” to the Church with the Second Vatican Council and “has something to say to us today,” particularly with his 1968 encyclical “Humanae Vitae” on human life and married love, especially its teaching about “the conception of life, the protection of life always.”

In his homily, Pope Francis said that “Jesus is radical.”

“He gives all and he asks all; he gives a love that is total and asks for an undivided heart,” the pope said. “Even today he gives himself to us as the living bread; can we give him crumbs in exchange?”

“A leap forward in love,” he said, is what would enable individual Christians and the whole Church to escape “complacency and self-indulgence.”

Without passionate love, he said, “we find joy in some fleeting pleasure, we close ourselves off in useless gossip, we settle into the monotony of a Christian life without momentum where a little narcissism covers over the sadness of remaining unfulfilled.”

The day’s Gospel reading recounted the story of the rich young man who said he followed all the commandments and precepts of Jewish law, but he asks Jesus what more he must do to have eternal life.

“Jesus’ answer catches him off guard,” the pope said. “The Lord looks upon him and loves him. Jesus changes the perspective from commandments observed in order to obtain a reward, to a free and total love.”

In effect, he said, Jesus is telling the young man that not doing evil is not enough, nor is it enough to give a little charity or say a few prayers. Following Jesus means giving him absolute first place in one’s life. “He asks you to leave behind what weighs down your heart, to empty yourself of goods in order to make room for him, the only good.”

“Do we content ourselves with a few commandments or do we follow Jesus as lovers, really prepared to leave behind something for Him?” the pope asked people gathered in St. Peter’s Square, including the 267 members of the Synod of Bishops and the 34 young people who are observers at the gathering.

“A heart unburdened by possessions, that freely loves the Lord, always spreads joy, that joy for which there is so much need today,” Pope Francis said. “Today Jesus invites us to return to the source of joy, which is the encounter with Him, the courageous choice to risk everything to follow Him, the satisfaction of leaving something behind in order to embrace His way.”