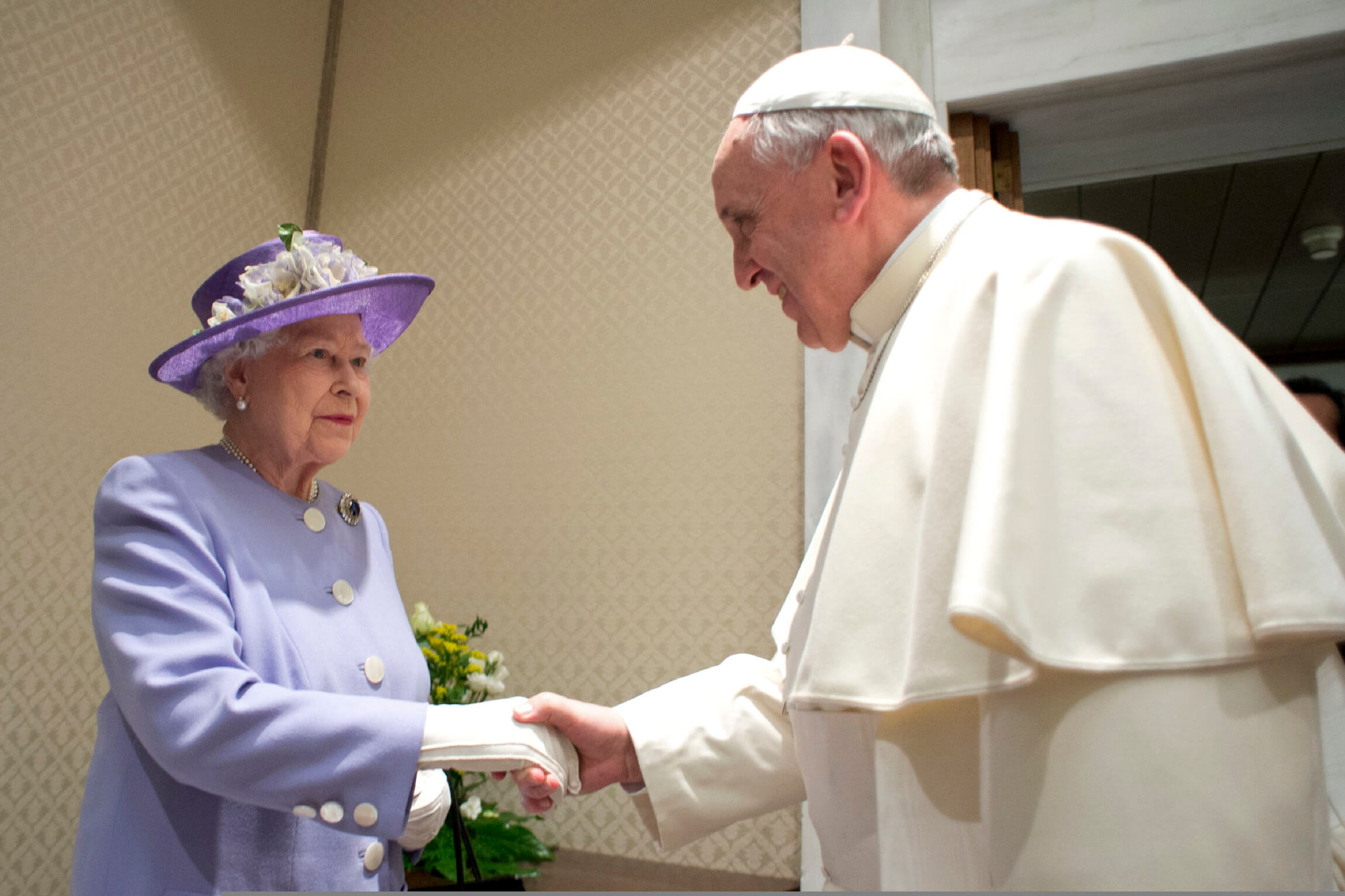 Photo Credit: CNS/L'Osservatore Romano via Reuters - Pope Francis greets Britain's Queen Elizabeth during a meeting at the Vatican in 2014. Olivia Colman portrays the queen in "The Crown.”

Anglophiles take heart: After a two-year hiatus, “The Crown” has made its much-anticipated return. The third season of the justly celebrated limited-series drama is currently streaming in 10 one-hour episodes on Netflix.

But it’s the highly lauded Helena Bonham Carter who ranks as the most welcome newcomer. She takes over from Vanessa Kirby the role of the queen’s younger sister, Princess Margaret.

Peter Morgan created the series, which covers what Winston Churchill (John Lithgow) memorably describes in the drama’s first season as “this new Elizabethan age,” which “comes at a time when mankind stands uneasily poised at the edge of catastrophe.”

Beginning in 1964 after the birth of the royal couple’s youngest son, Prince Edward (Sidney Jackson), the third season concludes in 1977 with the queen en route to the jubilee celebrations marking the 25th anniversary of her accession to the throne.

Along with the risque humor and colorful language it contains, the script deals with such mature topics as suicide, adultery, divorce, Alzheimer’s disease and semi-violent marital discord. “The Crown” is, accordingly, most appropriate for adults, though it’s not necessarily strictly off-limits for older adolescents.

Some themes recur throughout the season: reconciliation with estranged family members, the emergence of Prince Charles (Josh O’Connor) as his own man and the complicated yet enduring relationship between Elizabeth and Margaret.

Derek Jacobi plays Elizabeth’s uncle, the Duke of Windsor, who reigned briefly in 1936 as King Edward VIII before abdicating to marry twice-divorced American socialite Wallis Simpson (Geraldine Chaplin). The program explores the friendship that developed between the duke and Prince Charles and the visit the queen paid the former monarch as he was in the throes of terminal throat cancer.

It’s easy to understand the affinity Charles felt for his ostracized great-uncle, given the snubs to which he is subjected. After his investiture as Prince of Wales in July 1969, for instance, Charles insists to his mother that he has a voice. “No one wants to hear it,” the sovereign replies.

As Charles says to his on-again, off-again girlfriend, Camilla Shand (Emerald Fennell), “Being the Prince of Wales is not so much an existence as a predicament. Until she dies, I cannot be fully alive.”

Margaret also lives under Elizabeth’s long shadow and the stress of her situation makes her something of a loose cannon. So much so, that Philip describes her to Elizabeth as “your dangerous baby sister.”

A boozy middle-aged party girl, Margaret carries on an emotional vendetta against her husband, famous photographer Lord Snowdon (Ben Daniels), as part of the love-hate relationship into which their marriage has deteriorated. Both pursue affairs, hers with Roddy Llewellyn (Harry Treadaway), a future baronet with an interest in landscape gardening who is 17 years her junior.

“The Crown” gets off to a slow start and, early on, fails to reap the full dramatic potential of Churchill’s epoch-ending 1965 death. Some may also wonder how accurate its portrayal of royal family politicking behind closed doors is.

Did the Queen Mother (Marion Bailey) and Philip’s uncle, Lord Mountbatten (Charles Dance), really conspire to separate Charles and Camilla? Did Philip himself suffer a midlife crisis at the time of the 1969 moon landing, as the program suggests?

Whether or not he endured such an experience, Philip certainly did, as the series shows, support the work of St. George’s House, an institution on the grounds of Windsor Castle dedicated to encouraging dialogue between religious faith and philosophy.

Philip and the institution’s founder, Robin Woods (Tim McMullan), then Dean of Windsor and afterward Bishop of Worcester, developed a lifelong friendship. And the real-life Phillip has said that helping to establish St. George’s House has been his proudest achievement.

Viewers will come to admire the work done at St. George’s and so much more about the series.

Distinguished by sterling performances, sumptuous design and sharp dialogue — and equally well attuned to the majestic and the frail — “The Crown” remains exceptional television.