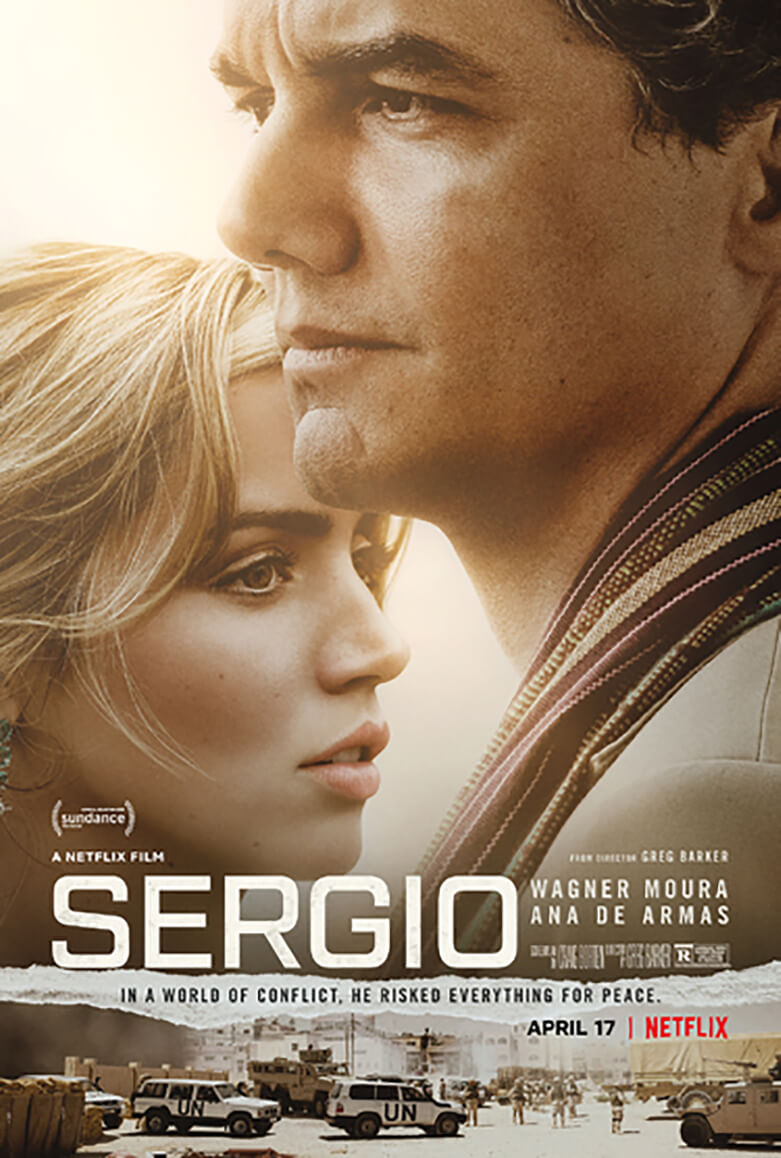 Photo Credit: CNS/Netflix - This is the TV poster for "Sergio" streaming on Netflix.

Acclaimed diplomat Sergio Vieira de Mello, who was killed in a 2003 terrorist attack in Baghdad, at age 55, accomplished more in his relatively brief life than many do who are blessed with longevity. So viewers might turn to the two-hour profile “Sergio,” streaming now on Netflix, with high expectations.

The Canal Hotel bombing, as the incident that claimed Vieira de Mello’s life is known, frames the narrative, which is based on former U.S. ambassador to the United Nations Samantha Power’s 2008 book “Chasing the Flame.” As Army medics try to rescue the trapped envoy, played by Wagner Moura, numerous flashbacks recall the journey that led him to this fateful moment.

Appearing much younger than 55, Moura fittingly invests his character with the undimmed earnestness, determination and independence that guided Vieira de Mello in his dual role as the U.N.’s high commissioner for human rights and its special representative for Iraq. In the latter capacity, he soon came into conflict with the top American official in the country, Paul Bremer.

As portrayed by Bradley Whitford (“The West Wing”), Coalition Provisional Authority head Bremer — sporting his signature desert-brown combat boots — comes across as smug and dismissive. “The U.N.,” he says, “works for us.”

Unsurprisingly, Vieira de Mello has different ideas. “Don’t suggest for a second we are here to support the U.S. or the coalition,” he tells Bremer. Instead, he insists, the U.N.’s aim must be to encourage the Iraqi people’s effort to recover their sovereignty.

“Sergio” also focuses on Vieira de Mello’s 1999-2002 stint as the U.N.’s transitional administrator in East Timor during which he oversaw that region’s emergence as an independent country after a 24-year conflict with Indonesia. “The first new nation of the 21st century,” as he describes it.

His achievements earned the humanitarian the sobriquet “The World’s Mr. Fix it.” Yet where his personal life was concerned, Vieira de Mello’s track record was more checkered.

Long separated from his first wife, he’s depicted as, at best, an inconsistent father. In one telling moment, for example, he forgets that his younger son, Adrien (Joao Barreto), is allergic to shellfish.

The legal status of the resulting relationship was complex. Morally, however, Carolina clearly understands Sergio to be married when they first fall for each other.

Beyond the mayhem the bombing engenders, “Sergio” is also marked by strong sexual content, including nudity, as well as some vulgarity and a scene of amputation — elements that make it unsuitable for youngsters. But the cavalier acceptance of adultery in Craig Borten’s otherwise empathetic and occasionally insightful screenplay makes “Sergio” doubtful fare even for adults.

Vieira de Mello’s questionable personal choices don’t, of course, detract from his admirable professional accomplishments over a 34-year career dedicated to human rights and the relief of suffering. Nor do they diminish the tragedy of his untimely death at the hands of al-Qaida. But the nature of the couple’s bond may affect viewers’ reaction to Carolina’s loss.

Aesthetically, “Sergio” suffers from an overabundance of flashbacks. Their protected length tends to lessen the immediacy of the events they depict.

Overall, the film registers as a seriously flawed attempt to honor a commendable public figure who was, nonetheless, a far-from-perfect man.