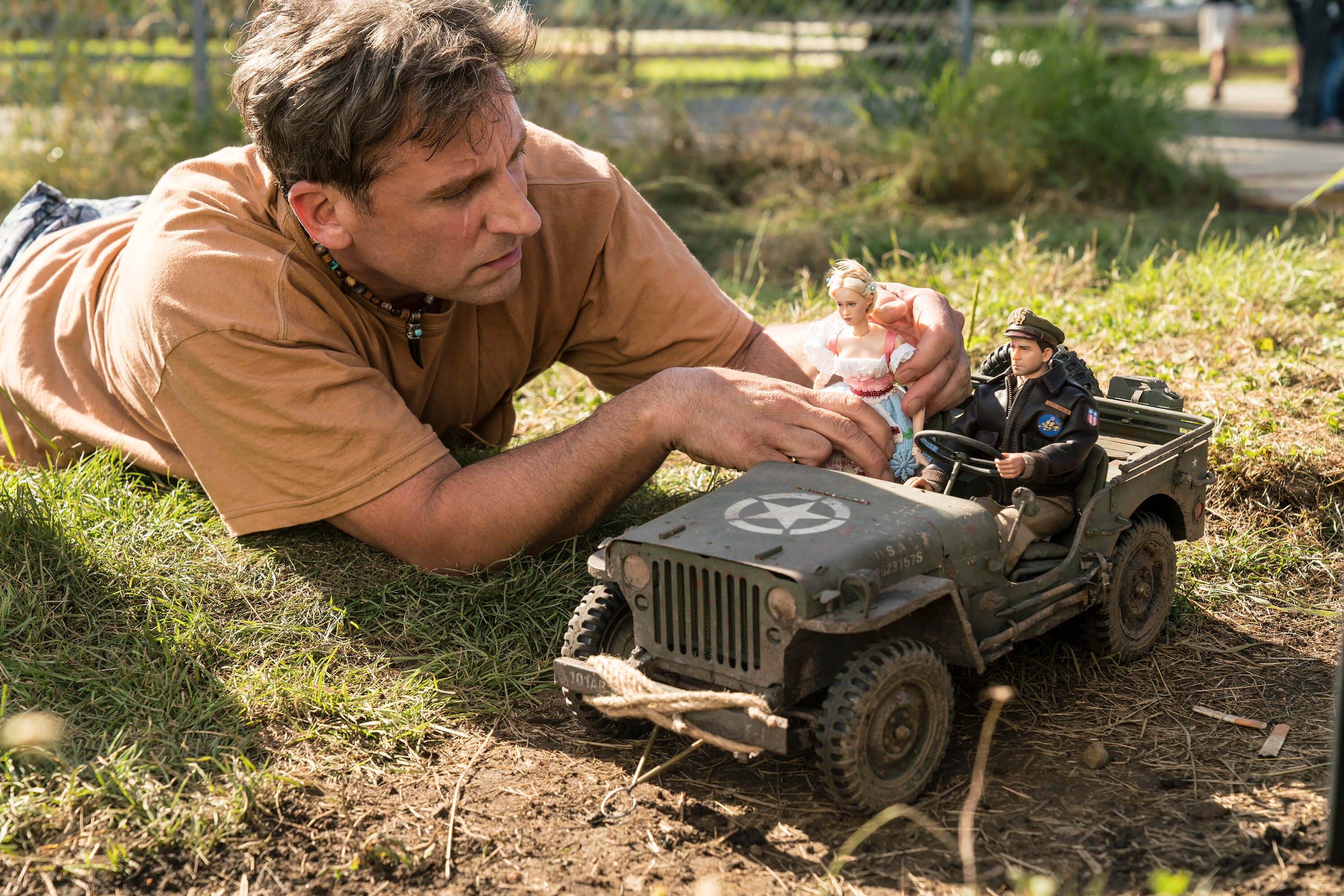 Photo Credit: CNS/Universal - Steve Carell star in a scene from the movie "Welcome to Marwen." The Catholic News Service classification is A-III — adults. The Motion Picture Association of America rating is PG-13 — parents strongly cautioned. Some material may be inappropriate for children under 13.

The story behind the fact-based tale “Welcome to Marwen” (Universal) is a compelling one. And it provided the subject matter for “Marwencol,” a highly-regarded 2010 documentary by filmmaker Jeff Malmberg.

Why, then, does director and co-writer Robert Zemeckis’ dramatization turn out to be so painfully unengaging?

In the spring of 2000, upstate New Yorker Mark Hogancamp, an artist who had had some success as an illustrator, was savagely attacked by a group of thugs. The near-fatal assault deprived him of much of his memory as well as the ability to draw.

Channeling his imagination in a new direction, Hogancamp eventually created a miniature World War II-era Belgian village in his yard called Marwen, which he populated with dolls. His photographs of these figurines have become celebrated both in gallery exhibits and in print.

Steve Carell makes a dedicated effort in his portrayal of Hogancamp. But his performance fails to redeem this project, weird as it is in all the wrong ways.

While Hogancamp’s plight is one that ought to elicit sympathy, and there are vague undertones of Catholicism in his life, his eccentricities, including a fondness for wearing women’s shoes, are off-putting. And his panic attacks, as depicted here, are sometimes so over-the-top as to be unintentionally funny.

Additionally, Zemeckis ill-advisedly devotes whole sequences to life among Hogancamp’s Barbies and Kens. Their interactions may work in his skillfully shot stills, but they fall flat on the big screen.

Playing out his own elaborate psychodrama in Marwen, moreover, may have been therapeutic for Hogancamp; it proves tedious for viewers. There’s also something vaguely unhealthy — or at least immature -— about the town’s pulpy proceedings.

The central personage in Marwen is Hogancamp’s alter ego, American fighter pilot Capt. Hogie. He’s surrounded, supported and protected by an ensemble of gun-toting tough girls, each based on a real lady in Hogancamp’s life.

The most prominent of these are Roberta (Merritt Wever), a clerk at the hobby store he patronizes, and his new neighbor Nicol (Leslie Mann), for whom he swiftly falls. His attackers, meanwhile, are represented by sadistic Nazis who are brought back to life as often as Hogie and the gals mow them down due to the black magic of Belgian witch Deja Thoris (Diane Kruger).

The screenplay, which Zemeckis penned with Caroline Thompson, is at pains to point out that, far from the symptom of homosexuality his gay-bashing assailants took it for, Hogancamp’s high-heels habit is of a piece with his very active interest in women. This finds another outlet in his taste for ludicrously-scripted pornography, one relatively tame scene of which the audience is made to witness.

Decked out in his aviator jacket and Air Force cap, Capt. Hogie may remind viewers of a certain age of Bob Crane’s genial and ingenious title character on the 1960s sitcom, “Hogan’s Heroes.” They — and others of a more recent vintage — would be well advised to stay home and channel-surf for reruns of that fine program rather than venture into this deeply flawed version of Marwen.

The film contains glimpses of a violent, gory beating, brief rear and images of upper female nudity, a benign view of pornography, a couple of profanities, a few milder oaths and about a dozen crude or crass terms. The Catholic News Service classification is A-III — adults. The Motion Picture Association of America rating is PG-13 — parents strongly cautioned. Some material may be inappropriate for children under 13.

Share This Post
Catholic Schools, Marriage and Family, movie reviews, Youth and Young Adults, Catholic Professionals, 'Welcome to Marwen'
See More
Last Article
Feeding the hungry in Brattleboro
Next Article
Love is at the heart of the Church’s social mission
Back to Vermont Catholic Magazine