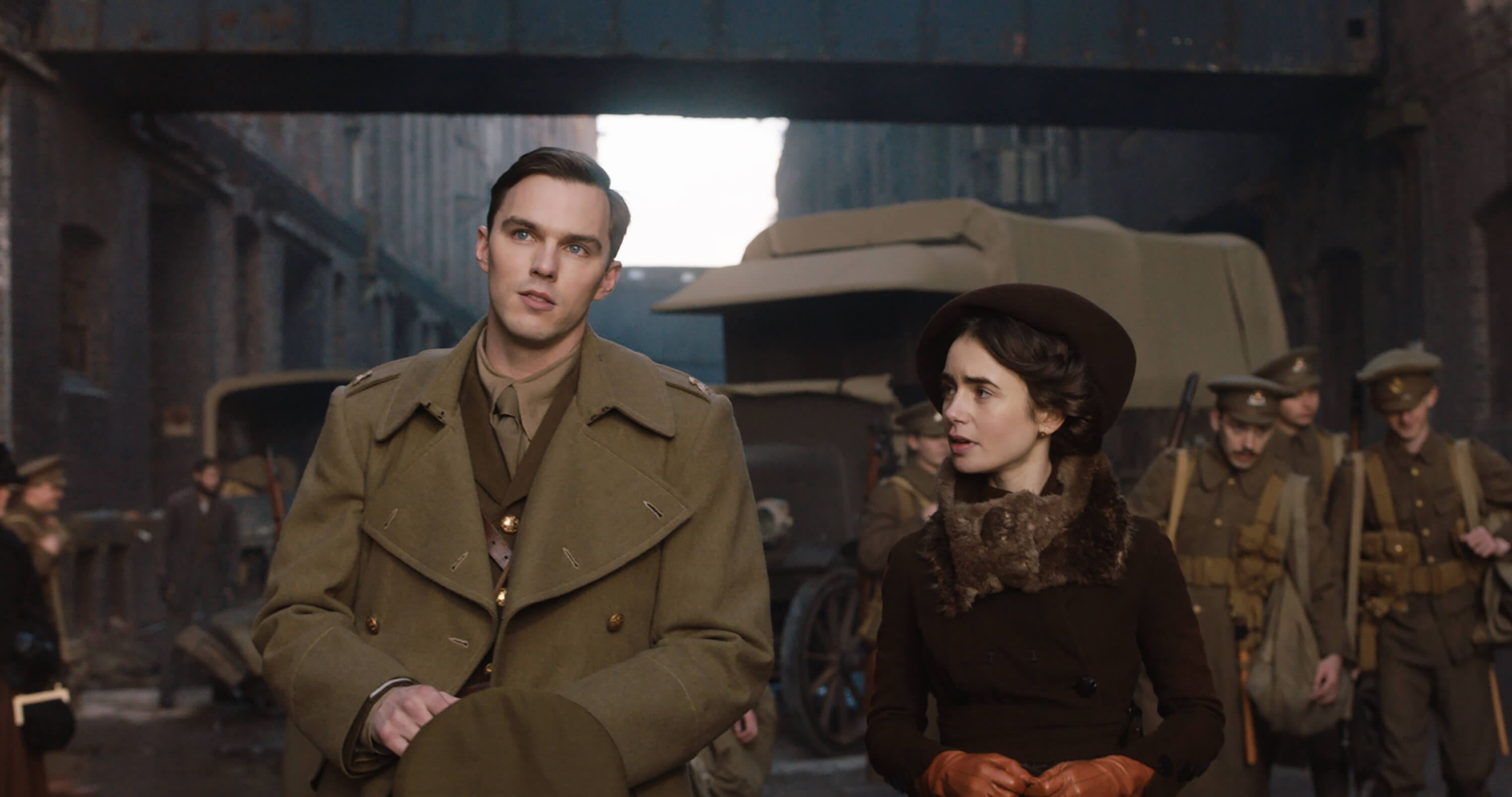 Photo Credit: Movie review: ‘Tolkien’ - Nicholas Hoult and Lily Collins star in a scene from the movie "Tolkien." The Catholic News Service classification is A-II — adults and adolescents. The Motion Picture Association of America rating is PG-13 — parents strongly cautioned. Some material may be inappropriate for children under 13.

By turns lyrical and moving, “Tolkien” (Fox Searchlight) is a sophisticated profile of the future novelist’s youth that succeeds on a number of levels. This may not be the biography that every fan of Catholic author J.R.R. Tolkien (1892-1973) is looking for, and it may not even fully accomplish what its makers set out to achieve. But, if nothing else, it does tell the story of the young Tolkien and his times.

Beginning with Tolkien’s quest to locate a friend and fellow soldier during the 1916 Battle of the Somme, extended flashbacks take us to earlier periods both happy and sad. Most significantly, they show us how Tolkien bonded with a trio of precociously gifted peers — Geoffrey Smith (Anthony Boyle), Robert Gilson (Patrick Gibson) and Christopher Wiseman (Tom Glynn-Carney) — and fell for his future wife, Edith (Lily Collins).

After a shaky start at Oxford, Tolkien also eventually finds his initial vocation as a philologist after coming under the spell of magisterial professor of that subject, Joseph Wright (Derek Jacobi).

As Tolkien wanders the scarred, mud-ridden landscape of the battlefield, vague visions of huge dragons and galloping warriors emerge from, then return behind, the smoke of war. This suggests that Karukoski and his collaborators are intent on showing how his service in the global conflict shaped Tolkien’s most famous works, his 1937 novel “The Hobbit” and “The Lord of the Rings” trilogy published 1954-55.

If so, however, the connection between real life and Middle-Earth remains elusive.

Certainly, the horrors of Tolkien’s experience may have inspired his portrayal of the forces of darkness and the travails to which his adventurers are subjected. And the deep friendship shared by the members of the club Tolkien and his pals formed may be reflected in the fictional fellowship referred to in one of his titles. But none of this is clearly or satisfactorily delineated in the film.

As for the strong faith that also contributed to Tolkien’s outlook, its only representative is Father Francis (Colm Meaney), the caring but stern priest who served as his guardian after the death of both his parents. This may leave Catholic moviegoers feeling somewhat cheated, though it’s not clear how strong a hold religion had on Tolkien in these early stages of his life.

What the creators of “Tolkien” are most successful in capturing is the broad range of emotions to which their protagonist must have been subjected by his varied fortunes. Thus the buoyant camaraderie that led the imaginative, artistically inclined quartet to regard themselves as brothers gives way, in the poignant latter part of the movie, to the grim fate in which they were all caught up and the toll it exacted on them.

The film contains some harsh combat violence, a few gruesome images and a bit of slightly bawdy humor. The Catholic News Service classification is A-II — adults and adolescents. The Motion Picture Association of America rating is PG-13 — parents strongly cautioned. Some material may be inappropriate for children under 13.